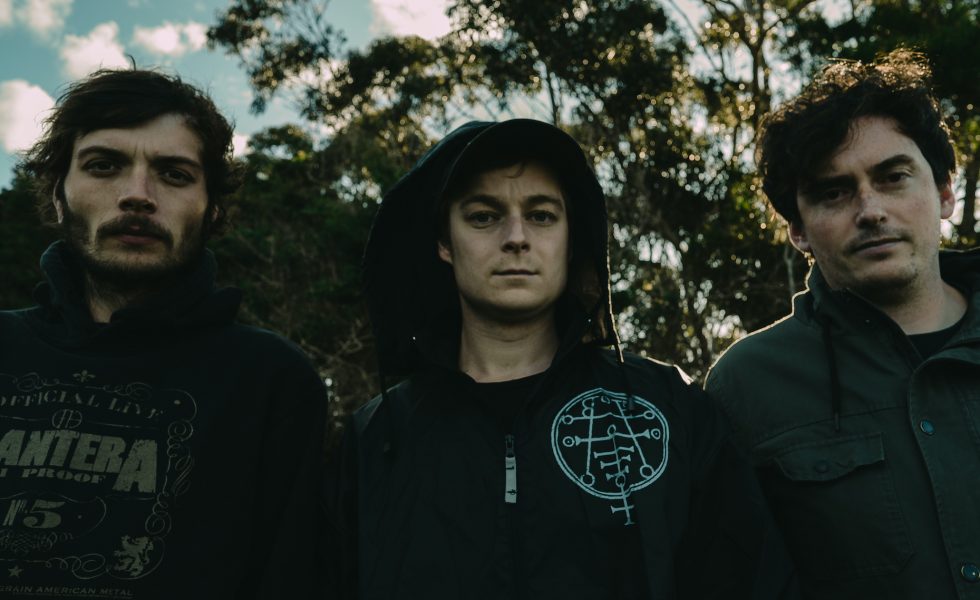 Port Macquarie extreme metal/chaotic hardcore act Letterbomb A.D. have lived up to their genre with another extreme track in their new single Dystopia.

As its title suggests, this savage new track has an existential meaning behind its lyrics, as explained by drummer and current vocalist Garrett McMaster.

“I guess just like, the whole general disdain of society and sort of … the human race being self-destructive as a species and just the whole feeling of apathy towards it; and how it can be frustrating just getting through life in general. And sort of like, trying to put that emotion out there and see if anyone else feels the same way and connects with it.

“2020 has been a good year for it, with all the corona stuff, so, I think everyone’s kind of feeling the same way (laughs),” says McMaster.

Finding a message behind the erratic guitars and thunderous vocals of this new track may be hard for the uninitiated listener unfamiliar with this more mathcore-inspired heavy sound. However, even if listeners have to dig a bit more for it, guitarist Dominic Sutton believes Letterbomb A.D. benefit from their songs having a deeper underlying meaning.

“I like heavy stuff that doesn’t have a deep meaning, but I think it is important to have a bit of a message sometimes. And to, I guess, take a stand on certain topics, to show where you stand, even like politically and stuff. I think all that stuff’s pretty important. Like, that’s just life in general.

“So, a bit of that should show in the songs you write, because it just shows more of the human aspect. If you’re not really writing about stuff that’s going on, then I don’t know. It just doesn’t hit as hard. It’s not as relatable,” says Sutton.

Dystopia sees Letterbomb A.D. following up on their debut self-titled EP in 2019. While there hasn’t been much time in between the two releases, McMaster and Sutton agree that this latest single is a big step up for the band.

“Definitely, I reckon. I think lyrically it’s deeper and sort of a more universal, like more accessible for everyone else to sort of connect to on the same level emotionally,” says McMaster.

We like having that real chaotic element to the band so, we wanted to really up that a bit with adding heaps of dissonance everywhere and just trying to make it heavier than what the EP was.
[ Garrett McMaster ]

“I think we wanted to expand more on what we reckon we’re good at as a band. We like having that real chaotic element to the band so, we wanted to really up that a bit with adding heaps of dissonance everywhere and just trying to make it heavier than what the EP was. I think we succeeded in hitting that off,” says Sutton.

There’s certainly no denying that Dystopia is a heavy track. With a more experimental, extreme metal sound combined with some classic hardcore elements, the style that Letterbomb A.D. are going for is certainly a specific one; but one that makes sense given Sutton and McMaster’s influences.

“We both really like Converge and Dillinger Escape Plan and all that. So, back when we originally started the band in 2011, everyone in our town, no one really listens to those bands, except for honestly us…We wanted to do something that was a bit more technical cause at the time, any of the bands in Port were all like, I guess a bit more traditional in a sense, like more traditional metalcore, and we wanted to do more experimental stuff. But then we also love like the deathcore stuff too, like Despised Icon and all that, so.

“We originally wanted to combine, you know, The Acacia Strain, Despised Icon with like Converge, Botch, Dillinger Escape Plan, Norma Jean, basically any of those sorts of bands. Like just trying to mix those two genres together because, I don’t think it’s being done that much,” says Sutton.

Genre is a topic within heavy music that can often stir controversy, with bands constantly moving in and out of certain definitions in the eyes of fans and listeners. For Sutton however, there is a benefit to having a more specific genre labelling like the one Letterbomb A.D. are operating within.

“I like it when bands have a particular genre that they label themselves as, because like, it’s just good to be like, ‘Okay, well, this band sounds like this’ and then I can be like, ‘I like this genre, so I can check out bands that fit that genre.’ Because if you just say metal, that’s a pretty huge range, you know…Like you can’t put Metallica next to Dillinger Escape Plan and stuff.  So, I reckon genres are very important to know what you’re playing,” says Sutton.

Even with such a specific genre label as ‘extreme metal/chaotic hardcore’, Letterbomb A.D. aren’t limiting themselves to this sound for their whole career, at least to an extent.

“Oh no, we’ll definitely be branching out, for sure…we want to get, I guess, more dynamics happening, so I think that we will be incorporating a bit more melody, at least in the guitar. But we’ll never be like a full-blown soft band or anything, but we definitely want to work on adding a bit more of a melodic element to the band. Just because it helps make the songs heavier, honestly,” says Sutton.

“I think if anything, now where we’re headed, or like where we’re at, at the moment, is kind of like a blueprint for what we want to do in the future,” says McMaster.

If you liked Dystopia then luckily, what the band have planned next isn’t far off.

“So, we’ve got at least, like four more singles between the end of the year and start of next year. And then, I think we do want to try and get an EP down by mid next year. I don’t think we’re going to worry about a full-length album until we get any record label interest, at the moment I think we’re pretty safe just doing singles and EPs…

“I mean, if we get a bit more of a fan base, absolutely we’ll do a full-length album, for sure. But right now, it makes more sense for us to be releasing singles and EPs. So yeah, I’d say we’ll have a new single out, hopefully start of next year, and then a couple more. And then hopefully an EP next year at some point,” says Sutton.

While Sutton and McMaster seem to have a solid plan for what comes next for the band in terms of music, there’s still a couple of things that they need to sort out for the future of the band.

While McMaster is currently pulling double duties in the band, serving as drummer and vocalist for the recording of Dystopia, Letterbomb A.D. are in search of a frontman to complete the band’s line-up for future releases.

“That’s idealistically what we’d love to do…we want to get a locked in singer before the EP, like someone that really gels with us well and, you know, we’re going to put the feelers out there, and hopefully we can find someone that we vibe with…

“Actually, if there’s anyone out there that reads this interview, and would like to try out for vocals, then hit us up. If you like all the stuff we like,” says Sutton.

Beyond the obvious search for a singer, Sutton and the band have some bigger ambitions for where they want to see Letterbomb A.D. in the next five years.

“I’d love to start just playing more shows on the weekends. Like I’d love to just play like, you know, decent shows in Sydney, Queensland, whatever. We would like to start playing around Australia a lot more. But, I mean, it would be awesome if we got a decent enough following to do a European tour. That’d be sick.

“So, hopefully in five years we’ll finally do a European tour or something like that…We don’t expect to become like full-time touring musicians, because we know we’ve picked a very extreme genre to expect a huge following for, so, yeah. But, you know, fingers crossed that we get a bit of a following and we can start playing more shows once the Corona stuff’s done,” says Sutton.

Until then, Sutton and McMaster just hope that listeners can take something out of this latest track Dystopia; or at the very least, appreciate it for the heavy-as-hell track that it is.

“Hopefully at least one person out there like literally shits their dacks, physically. That’d be cool (laughs),” says McMaster.

“I’d just be happy if someone’s like, ‘Holy fuck, that was sick. That had some nice headbanging grooves and I’d like to do an air guitar and shit to that track’…If someone air drums or air guitars to the track, we’ve succeeded (laughs),” says Sutton.

“Yeah, if it makes someone’s day, and changes someone’s life out there, like at least one person or something, that’d be sick,” says McMaster.