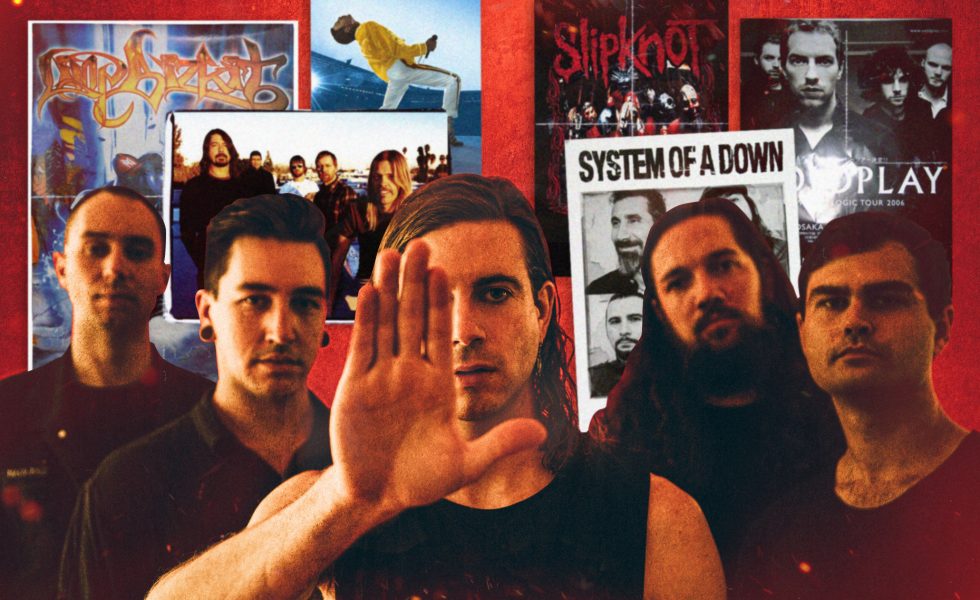 KICK OUT THE JAMS // In Hearts Wake At The Final Frontier

Aug 24, 2020 / WORDS In Hearts Wake with The Editor / The cuts that inspired their fifth album

Byron’s eco-metalcore warriors In Hearts Wake have just released their KALIYUGA album, their fifth and most ‘sustainable’ record to date.

Committed to saving the environment, the band made efforts to keep everything carbon neutral from production to their physical releases. They also planted a tree for every thousand views first single Worldwide Suicide gained on YouTube – which means 324 as of writing. We got the band’s take on the jams that helped inspire them as artists and as activists with some surprising cuts mixed in.

Significant Other was the first cassette album I purchased when I was 7 years old. I had no idea what the lyrics to Nookie meant, nor did my Mum, but I use to jam it loud and go crazy.

Queen – We Are The Champions

I remember purchasing “Queen’s Greatest Hits” on CD when I was eight years old. I got hooked on Queen because We Are The Champions used to come on TV during the 1998 FIFA (Soccer) World Cup. I loved the game, and who doesn’t love winning? Plus Freddie can sing a tune. Olé Olé Olé! ⚽️

This was one of the first tracks that really got me into metalcore when I was 13. It captured the fury, frustration and urgency unlike no other. It was very cool having their guitarist Nick Hipa come hang with us at a show in San Diego and then doing a solo on one of our tracks. Long live the core! 🤘🏼

I learnt to play guitar when I was five thanks to my Dad. He would teach me simple things and tell me to practice them until I got good enough for him to teach me something a little harder. Father and Son by Cat Stevens was one of the songs he taught me to play when I was young, and we would to play it together, so it holds a special place in my heart. Writing this reminds me I need to start playing more guitar with him again!

I went to my first ever Splendour in the Grass in 2003 at the age of 13 with my parents. Coldplay headlined and it was the most inspiring thing I had ever seen. I just remember Chris started playing the intro on the piano and I instantly had goosebumps all over my body. The atmosphere was like nothing I had experienced before, and nothing has even come close since. I think that was one of the first times I got a taste for live music at that level, the production and sound was incredible and just left me wanting more. I feel like moments like that have always inspired me to evoke emotions with the music I create to try and recreate that feeling all over again.

This song reminds me of late night drives on tour in another country while trying to go to sleep sitting upright in the van. I’d always put on music to go to sleep to on tour because it helps block out the music the driver would be listening to so they could stay awake. They’d usually be listening to something heavy and loud so this album would be my go-to for something nice to fall asleep to. It really makes me miss tour in times like this and hopefully we can get back out on the road again sooner rather than later.

System of a Down – BYOB

This is the track that got me into metal. Looking back, it felt like a revelation hearing this for the first time. Coming from a predominantly country-based musical household I was blown away by just how aggressive and fast their music felt.

This album came out the year I was born! Although I didn’t hear it until I reached my teens the impact it had on me as a vocalist was immense. This is truly one of the greatest metal tracks ever written and Rob Halford will always be the “Metal God”.

Lee Kernaghan – Boys from the Bush

I grew up in a country town called Tamworth, where country music was king. My parents would always have something playing in the house and more often than not it was The Outback Club by Lee Kernaghan. We went and saw him play when I was about 12, I remember feeling incredibly starstruck and overwhelmed. This was probably one of the moments that really made me want to pursue music, so thank you Lee for being a legend that day because I may have chosen a different path.

I was just starting high school and my cousin had come to stay with us from South Australia for a holiday. He insisted I borrow his copy of Limp Bizkit’s Chocolate Starfish And The Hot Dog Flavoured Water to listen to while he was there. Having only really listened to my parents’ music catalogue, with a sprinkle of pop and hip hop, this record opened my eyes and ears to a whole new world. Rollin’ was the song that drew me into heavy music.

The first Anberlin song I was introduced to by friends as a teenager, which sparked an ongoing love for what these guys have put out over the years. Ready Fuels and Change the World continue to be a soundtrack of nostalgia from my youth, right up to being an inspiration for the riffage today.

This song has always stuck with me. If there’s ever a song I can attribute to the feeling of joy, it’s this one. When I saw them play it live at Splendour In The Grass, it was nothing but goosebumps and smiles for four and half minutes straight. Just magical. And a constant source of motivation to find my own way of creating that experience for others.

This song has a permanent spot in the playlist on long overnight drives in the van. Hide and Seek reminds me of having finished a great show a few hours prior, having had a hot shower, my body aching, and I’m not ready to sleep in a van for the 20th night in a row; but not wanting to have it any other way. It was the lullaby equivalent for a van full of sleepy men whether it be in the US or Europe, Imogen comes everywhere with us.

Slipknot – Spit It Out

I was 12 when I first heard this song. I was watching rage late one Friday night and as soon as I heard the intro kick in, I was hooked. I had never heard anything so heavy in my whole life. I remember getting the self-titled album from Sanity [music store] in year 7 and listening to it on my walk to and from the bus stop for school and turning the volume down as I walked past people because I felt like I was doing something wrong listening to something so heavy. I still listen to that song regularly and get the same feeling all these years later, this song was my introduction to heavy music and I’ve been hooked ever since.

Taylor Hawkins is a huge inspiration as a drummer. His ‘animal from the Muppets’ stage presence in this clip is something I have always tried to adopt for my own performance. This song has so much energy, is so raw and ballsy, it still hits me hard whenever I hear it. Monkey Wrench is the perfect energetic, loud, fast, raw rock song and a definite Foo Fighters staple.