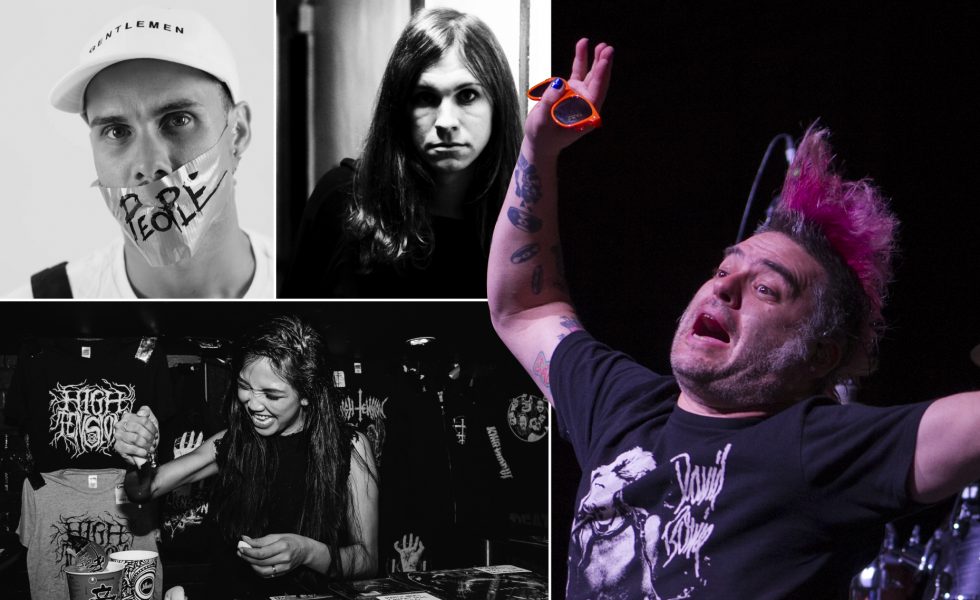 Most of you should know by now that Hysteria is a hotbed of hot takes.

Some of them are a little spicier than others—we don’t always agree with each other as writers, though I can appreciate the prose; there are some damn good words hitting this site on the daily, and that’s just a matter of fact.

The latest #RealTalk piece, however—a fiery rant about how punk has supposedly been ravaged beyond recognition by the big, bad boogeyman that is politic*l c*rrectness (censored for the safety of our conservative readers’ feelings)—has annoyed me. A few good points are raised, but it essentially ends up spouting the same half-baked whinge those neckbeard-sporting Boomer hobbits triggered by progression usually do: bands are nicer now and give a shit about what they say to people, so therefore—obviously—punk is dead.

Except that it’s very much not, and the “justification” made in the piece makes about as much sense as the last few Fast & Furious movies.

ICYMI, here’s the story: NOFX played at the Punk Rock Bowling festival last week. That festival took place in sunny Las Vegas, where—again, ICYMI—58 people were murdered (with 851 others injured) in a mass shooting at last October’s Route 91 Harvest festival. During NOFX’s set, the following exchange found itself nestled in their stage banter:

Fat Mike: You play a song about Muslims, you’re going to get shot.

Eric Melvin: I guess you only get shot in Vegas if you’re in a country band.

Fat Mike: I mean, that sucked, but at least they were country fans and not punk rock fans.

Fat Mike: You were all thinking it!

One’s freedom of speech doesn’t negate another’s freedom to call that speech out as numpty bullshit.

The response was extremely predictable for 2018: Fans jumped on Twitter and immediately tore Fat Mike and Melvin to shreds. The organisers of Punk Rock Bowling issued a statement decrying the pair’s comments at their event, and NOFX’s own Punk In Drublic festival booted them from the line-up. Yeah, their own fucking festival gave them the flick.

It’s often argued that forcing out apologies for jokes made in (objectively) bad taste is impeding on an artist’s freedom of speech. But there’s a glaring issue that mars that narrative: one’s freedom of speech doesn’t negate another’s freedom to call that speech out as numpty bullshit. You can say however much you want that “social justice warriors” have destroyed the sanctity of a once-thriving subculture—freedom of speech means you have all the right in the world to do so, but it also means I can say you’re a fucking dolt in response.

Was NOFX’s “joke” out of line? Yeah, for sure. Was it the kind of thing you expect from a scrappy, mainstream-rejecting punk band whose memoir is titled The Hepatitis Bathtub? Again, yes. So do I think they should have apologised? Well … Kind of. Being a punk doesn’t mean you can’t have a functioning moral compass—being uncomfortable with jokes making light of serious tragedies doesn’t suddenly make you a bootlicking fascist with a Care Bears neck tat—and a lot of punks did think NOFX went too far at that festival. Hell, I’d argue that it’s even more punk to be a fan and rally against a band when they do something shitty. This lot of kids on Twitter stood up for their beliefs and threw so much enmity at NOFX that they apologised. That’s more punk than GG Allin punching a cop in the face while he chews a glass burrito and pisses pure heroin onto a baby.

Tweeter @ScrappyChaos made a great point when they responded to our tweet plugging the #RealTalk piece: look at bands in the class of Bad Cop/Bad Cop, Limp Wrist and The Briggs. They all take no shit, wear their hearts on their sleeves and will crush a motherfucker standing in their path to scream from the hilltops their strong and unyielding opinions. And, y’know, they’re not comprised of edgy cunts who say offensive shit for the sake of it.

There was another tweet name-dropping G.L.O.S.S. that’s since been deleted, but I need to riff on that for a bit as well. Those legends in particular—hailing from the decidedly un-punk Olympia, Washington, their name standing for Girls Living Outside Society’s Shit—were especially notable. They were a thrashy crew of societal outcasts that made heavy and harsh hardcore that spoke fearlessly on topics far outside the mainstream’s caring, like queer rights and police brutality. They even broke up because their jams were gaining too much traction and major labels were clambering for their attention. That’s so goddamn punk! Seriously, fuck anyone that says bands like G.L.O.S.S. aren’t punk because they’re not rough-looking high school dropouts or because they’re politically correct.

That’s not even mentioning bands like Great Wight and Destroy Boys, both of whom are criminally underrated, politically correct, and punk as fuck. Because punk has never been about being politically incorrect or scaring kids off, and to argue as much is to admit a gross misunderstanding of the core principles that punk is rooted in. Punk is about sticking it to the popular consensus and doing whatever it takes to make yourself heard, and it sure as fuck doesn’t have a set of rules. Punk can’t die, when you think about it, and there‘s an abundance of acts making sure that statement rings especially true in the present day.

And then there’s Australia’s own burgeoning punk scene, shoving more young skate rats into sweaty moshboxes than ever …

Even in the foreground, we have acts like The Fever 333, Against Me! and Jeff Rosenstock all fighting for equality and a respectful, progressive society via indignant and impassioned action the likes of which only a punk band can. Laura Jane Grace alone is more punk than of any those mohawked fossils could ever dream to be (read her memoir, it’s fucking intense), and she’s a trans woman who sticks her middle finger square in the face of anti-PC wankers. I dare you to stand there and tell me those bands are all “not punk” because their unforgiving ire is pointed at those who wish to dogpile on minorities, and they call those right-wing troglodytes out when they say some dumb shit (like when Fever 333 screamlord Jason Aalon Butler trashed Kanye West for those thoughtless “Slavery is a choice” comments).

And then there’s Australia’s own burgeoning punk scene, shoving more young skate rats into sweaty moshboxes than ever thanks to bands like West Thebarton, WAAX, Dune Rats, Clowns, High Tension, Bare Bones, Totally Unicorn and—yes, I’m going there—Camp Cope. All of those bands are making crazy massive waves right now, and they’re all doing so without resorting to the tired tropes of lowbrow humour or anti-PC drivel. Amazing, right!?

Camp Cope are probably (see: absolutely) the most punk of the lot, too. We even posted a whole thinkpiece about just that, which you should take definitely a squiz at. The fast-rising Melbourne trio were recently thrust into the limelight with a controversial statement of their own, when frontwoman Georgia Maq urged straight, white men not to review their most recent LP (which, sidenote, is a gem and a half) and stated outright that it wasn’t intended for that audience at all.

It was the exact kind of thing people that spew the “punk is dead” narrative wished more bands were fearless enough to do, and yet, it’s the exact thing people like them shit their pants over when when Camp Cope said it. Because all they really know about punk bands making their voice heard is crusty old white men who don’t know how to shower spouting base-level anarchist quips that relate directly to their own quandaries. They see a person from a minority group do the same sort of thing and chuck a big, fat sook. It’s delicious hypocrisy.

Punks are smart, considerate and inclusive now, and they stand up for more than just being outrageous and abrasive. That’s a good thing!

All of the bands above charge more than $10 for their shows, too, and their members all have some solid booksmarts to flaunt. Why? Because eating stale pizza three times a day and sleeping in stained-wall squats is only cool for so long; garlic butter steaks and memory foam mattresses are a trillion times better, and believe it or not, you can indulge in both and still retain your punk ethos! Jeff Rosenstock lives in a house! And drives a car! And plays at festivals like those hosted by Pitchfork! And yet, he’s still a bonafide punk, through and through.

But even so, those $10 shows and DIY diehards still exist. Go watch Canine, Scabz, Sports Bra, Pist Idiots, Stork, The Bear Hunt, Mere Women, POW! Negro, Carb On Carb, Rort Menace, Homesick, Masochist, The Cutaways, Dispossessed or Lost Talk at a venue like Beatdisc or the Rad Bar. Don’t complain about those bands ceasing to exist if you’re too lazy to seek them out.

So punk isn’t dead. It’s changed, sure, but infinitely so for the better. Punks are smart, considerate and inclusive, and they stand up for more than just being outrageous and abrasive. That’s a good thing! And the line noting that punk should be about “chugging beer and smoking weed”—I don’t know about you, but if a genre’s lyrical tropes stagnated for over four whole damn decades, I’d be pretty fucking bored with that genre. Good riddance to the notion that punk songs can’t be about more than a predetermined set of emblems.

Also, Disney’s set of Star Wars flicks have all been top notch viewing so far. Fight me.