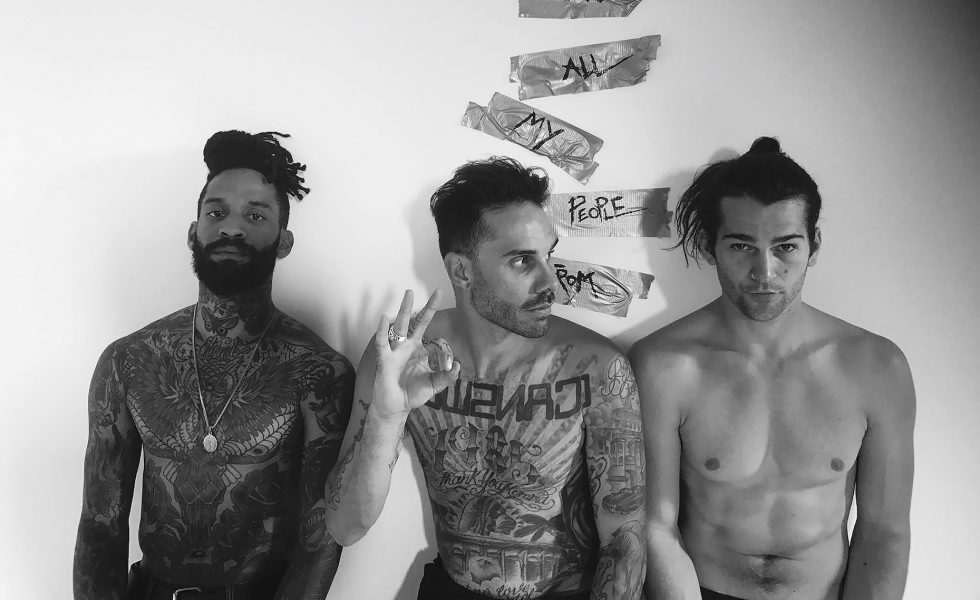 THE FEVER 333 // Awakened Spectres of Revolution

The Western world is going through political and social unrest.

MORE: Amorphis rise out of Perkele // Parkway Drive – The FULL Story behind Reverence

Populist leaders taking power across Europe and America are creating a disenchanted society with a broken political system and an economy rigged to serve only 1% of the richest people in society. As a consequence citizens are starting to wake up and take action in their local communities and dissent against the ruling classes. One band whose mission is to carry out this revolutionary message is Los Angeles outfit The FEVER 333. This group comes out of a tradition of sonic rebels from hip hop and punk rock backgrounds and has created a hybrid genre that sounds explosive.

Some have called them a supergroup; they are three multi-racial musicians consisting of Jason Aalon Butler (ex-Letlive), drummer Aric Improta (Night Verses) and guitarist Stephen Harrison (ex-The Chariot). To take their music and ideology one step further, the trio secured a deal with the prestigious rock label Roadrunner Records, “It’s a testament to how much they believe in what we’re doing”, says singer Jason Aalon Butler, “They’ve shown us full support and really have no fear in allowing us to lead the ship which is not very common for a label especially one of that size and to let you do exactly what you need to do as an artist. We’re really lucky to be part of that team”. As a live act their energy is what you would expect from a punk/hip hop band, it’s an electrified atmosphere that makes a crowd go apeshit, if you’ve seen Rage Against The Machine or Death Grips live you can expect the same from a FEVER 333 concert.

Butler continues: “They’ve always been my first loves, punk rock and hip hop are my beacon, my guiding light artistically as well as politically and ideologically. Our band is a tasteful rendition of hip hop influence and punk rock but we didn’t try to genre sample, it was more about taking cues from the things that we love and that’s what comes through in our latest E.P Made An America”.

As The FEVER 333 firmly advocates for a movement that is already beginning to take place in their home country and around the world. Their reason to exist has become not only to create the soundtrack to the revolution but to empower people into taking action themselves and start working with their respective communities to combat regressive policies as well as giving back to charities and to ignite in people’s minds that change is possible,“ If anything we would like to be a catalyst for that change for the listeners or advocates of the project and reflect what people want to see in themselves. I say every night, I just want to make a safe space for people to be who they are or who it is they want to be and by doing so it really promotes an idea of freedom and liberation that will hopefully spread and affect other areas of people’s lives as well as those around them.”

The idea behind the title is that we’ve created a country, an idea of a world power on the backs of people we negate, subjugate, marginalise and disenfranchise and I think it’s a huge irony that we ignore as a country.
[JASON]

Their debut E.P Made An America came out in March and is a small taste of what a debut FEVER 333 album will sound like. It features rapper Yelawolf on the song (The First Stone) Changes and sometimes additional drummer Travis Barker also lends his talent to the EP as well as joining them live on a few occasions. “The idea behind the title is that we’ve created a country, an idea of a world power on the backs of people we negate, subjugate, marginalise and disenfranchise and I think it’s a huge irony that we ignore as a country”.

Butler was also passionate on why America can also be a place for good rather than just a nation that turns a blind eye to the fact that an entire country was built by immigrants and on the back of slavery. “Being the country we are, we have such a large effect on the world and things that happen in this country have such a large effect. I want to really discuss the integration that makes this country what it is and also discuss the integration of what makes any culture what it is, It’s about understanding that if we ignore the problem sitting right in front of our doorsteps then we’ll never be able to move past them and to afford ourselves a place that we can exist peacefully or at least on an intellectual level.”

This huge transformation is filtering its way in culture, the arts and even in sports with political statements such as the African American footballers kneeling down during the national anthem in protest of police brutality towards people of colour last year. The FEVER 333’s message reaches far beyond their borders; their willingness to show international solidarity with artists and activists from different countries is the essence of the band’s philosophy. It’s also worth mentioning that Butler featured on Ecca Vandal’s 2017 debut album on the song Price of Living that examines the Australian government’s mistreatment towards refugees and people who seek asylum in this country.

Protest in rock music may not be as popular as it once was but it hasn’t gone away. Now more than ever there is a need to question the current state of affairs. They say that in every grey cloud there is a silver lining. In reaction to all the injustice and corruption currently around the world, The FEVER 333 are burning the candle bright for the next generation of politically conscious artists who seek to change the world through music.