AT THE DRIVE-IN Magic in the Second Act

What does it mean to be friends forever? What does that mean when you’re in the hottest band in the world, on the cusp of superstardom … only to break up? At The Drive-In travelled that lonely road and broke on through to the other side. Cedric Bixler-Zavala tells ALL about their demise, rebirth and the bond of brotherhood resulting in in • ter a • li • a. It’s magic in the second act, and it’s all in Hysteria #53.

At The Drive-In: magic in the second act.

Who ever thought we’d be listening to new At The Drive-In music? A few short years ago, you wouldn’t even get frontman Cedric Bixler-Zavala in agreement. The music industry took its pound of flesh from these teen rock heroes, and now they’re living their best life, rocking their best tunes. It’s the perfect punk rock revenge. Cedric Bixler-Zavala tells ALL about ATDI’s demise, rebirth, and the bond of brotherhood. Out now in Hysteria #53.

“Heavy music is for heavy people. Most people are pop.”

Ice-T is the lyrical weapon, the master OG of hip-hop/metal crossover legends Body Count. Opinions? His opinions used to scare the President of the United States. What does he have to say now? Prepare for one-in-the-chamber #RealTalk, Ice-T style.

The enemy of good is Joel Birch’s struggle.

Perfectionism is the bugbear of all who create something out of nothing. The Amity Affliction’s vocalist debuts his most personal photography in new book Prelude—my life on 35mm film. What glimpses do we see into his soul? Find out in #ArtCore.

What’s red and black all over? An All-Aussie metal festival in Alice Springs.

We travelled into the centre of Australia herself, baring witness to the first All-Aussie, all-mental Blacken Open Air festival. What do thousands of barking mad metalheads get up to, hundreds of miles from nowhere? We went #OnLocation and got a first-hand look …

3192 reps go worldwide in the craziest way possible. Adding a THIRD guitarist to their hardcore mix pushes them beyond 11. The Europeans? Well, they can’t get enough of it. Find out what the EU thought of our boys (and girl) on their massive, sold out Lucid Again tour.

Miss May I have more time to record? Pretty please?

Trojan (Ohio) metalcore mavens Miss May I had 35 days to record new album Shadows Inside on the few weeks they had off from touring. Challenge accepted. Did they succeed? We chucked a #QualityHang to get the debrief from Levi Benton himself.

PLUS: Motionless In White, Bare Bones, Casey + reviews on all the hottest albums!

END_OF_DOCUMENT_TOKEN_TO_BE_REPLACED 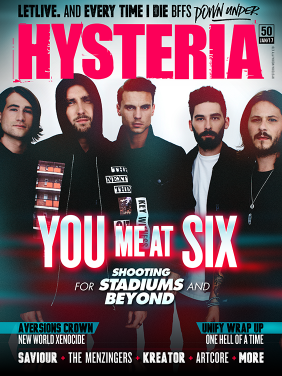