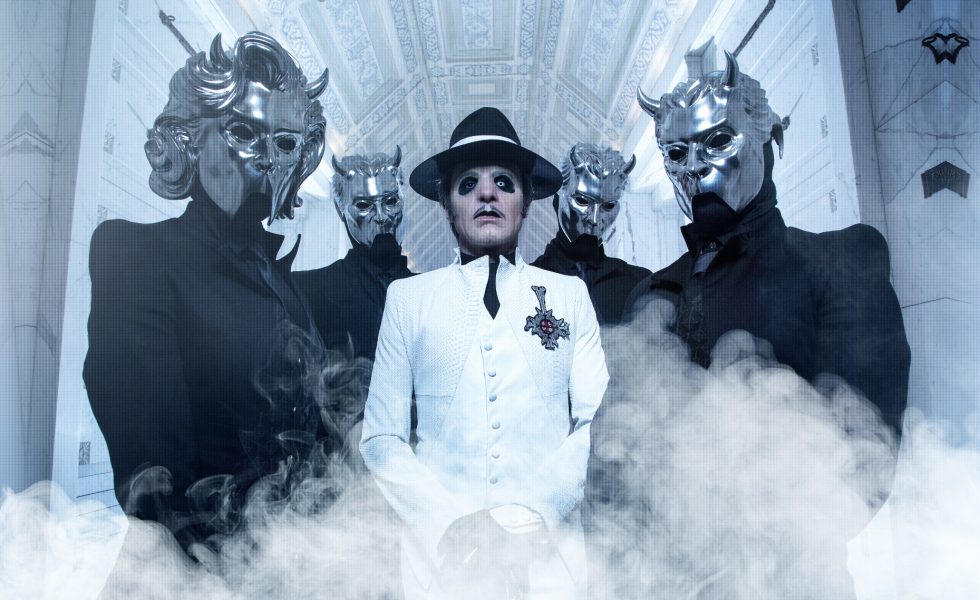 GHOST // There Went The Sun

Brute reality is the enemy of culture. The “Papa Emeritus” behind Ghost was outed last year amid legal stuff. The Father is out of the cloister, and his name is Tobias Forge.

He’s feeling pretty chuffed, seeing his musical hero James Hetfield, “the best rhythm guitarist in the world,” did a little cover of Cirice that’s blown up over the last few days.

“Seeing that clip obviously is very gratifying in many ways, but I mean, considering all these years that I’ve been playing his riffs and now all of a sudden he’s playing mine,” Tobias trails off, marinating in the realisation that James Fucking Hetfield played his song. “To see him play my riff and play it wrong … it makes him very human. It’s very …”

“Yes. Of course, of course. He’s my hero, so of course it feels good.”

Sweden’s Ghost is the ultimate mystery in metal. That’s despite the reveal of some Nameless Ghouls and Papa Emeriti, before a closely guarded secret. They all wore black robes on stage, covering their faces. But it’s not the people alone; it’s the music. Wind back the clock 30 years, and they might have taken pride of place on Top of The Pops or Countdown. Ghost’s black metal cross psych pop with a sprinkling of KISS style theatrics has much of the metal world under Tobias’ wicked spell. Fourth album Prequelle (pronounced pre-KWELL) is a semi-sort-of concept album about the Black Death.

If ABBA put a positive spin on the Battle of Waterloo, Tobias does the same for a continental pandemic.

“I’m drawing parallels to the trauma that was the Black Death,” Tobias, officially clergy leader Cardinal Copia, says. “That doesn’t mean that it’s necessarily a historic tale of the actual Black Death. It’s just using the Black Death as a symbol for a gravely traumatic experience for Europeans. As a European I usually refer to when Black Death was in Europe. I know that the Black Death was also in Asia before that, but that is not part of my history so I can’t really deal with that. But towards the end of the 1340’s and the beginning of 1350’s, it was obviously an immense trauma for the population of Europe.”

Black metal have covered that plague so often it’s become a running joke. It’s like power metal covering the Knights of the Round Table, The Amity Affliction covering oceans.

“Usually those records are written from just focusing on the death toll or the people who actually succumbed to the Black Death, whereas I wanted to write a record that focused a little bit more on the half of the population that survived. In a way that this record is about mortality, it’s a record about survival, it’s a record about being surrounded by an omnipresent threat of death, doom and destruction and how to come to terms with that and acknowledging the fact that you are, at the end of the day, mortal.”

How uplifting. Though Tobias seems to depict the Black Death as a heroes’ journey for the survivors. Emerging out of the belly of the whale, returning with the gift. That gift being an existence, where so many perished.

“We do not know if there is anything beyond our life, we can debate that,” Tobias says, “But this record is a little bit more carnal in the way that we can agree that we do not know, so we need to establish that there might be a possibility that this is the one life that we’re living. I personally don’t want it to be like that, but I can’t justify saying that’s not the case. So, that’s basically what this record is about. Mortality and turmoil. Surviving turmoil.”

Did the recent legal troubles, where four Nameless Ghouls (Simon Soderberg, Mauro Rubino, Henrik Palm, and Martin Hjertstedt) sued Tobias for perceived withheld salary and as a side-effect outed him as Papa Emeritus, have an influence?

“It was also an inspiration for the record. A lot of the lyrics are very close to home, yeah.” An uncomfortable silence follows. Moving right along, then.

It’s a record about being surrounded by an omnipresent threat of death, doom and destruction and how to come to terms with that and acknowledging the fact that you are, at the end of the day, mortal.
[TOBIAS]

On Prequelle, the music skips farther afield from the metal genre. It’s all hard driving riffs and Satanic characters, but we’re treated to dizzying synths and smooth saxophone solos. Like a student of the conservatory, Ghost is the product of its history. The conservatory just happens to be sticky-floored bars, lessons handed down by leather-clad wildmen.

“I think that if you are a rock or metal fan, if you’re remotely interested in the history of rock and hard rock and heavy metal, you will see that you can easily hear that a lot of the older vanguard that was active in the late ’60s and throughout the whole ’70s and early ’80s, they were obviously not very inspired by death metal,” Tobias says.

Ghost, at least to Tobias, is like using his musicality as conduit to pull the past into the present. There’s plenty of fossilised bands living on their legacy, but Ghost is a portal to a place that may have existed, in some liminal form or another.

“When I was even younger, I only obsessed about bands that were in the ’60s. I spent most of my life just listening to a lot of bands I would never see. I will never see them the way that I wanted to see them. In a way, I think that kids should be kids and they should see their contemporary bands. I think it’s good to know your history, but I don’t blame anyone who’s not. If you come to a show like ours, I don’t blame anyone if they don’t know what Alice Cooper did in 1975. When I got into Rolling Stones, they were very adamant about always talk about their influences. Muddy Waters and Chuck Berry. I got into it, but not in the same way I was into the Rolling Stones.”

Ghost isn’t a wholesale “revival” of theatre-rock ala Alice Cooper and KISS – they both still tour after all. Kids love Ghost. Old hands also appreciate what they’re doing. It’s not uncommon to see rockers in their 50s, 60s, even 70s, line up for a Ghost show.

“They tell me, ‘I used to go see Alice Cooper, I used to go see KISS, I used to go see this and this band, and I haven’t been to much concerts over the last 30 years or 20 years. I lost interest. Now that you’re here, it brings me back to the venue and that feeling of really wanting to see the band.’”

As Tobias says, you don’t need to know what Alice Cooper did in 1975 (he released Welcome to My Nightmare and a TV special of the same name, a audio-visual feast of the macabre … in case you were wondering) to enjoy Ghost. Relax your rational mind and let the flesh take over.

“An orgasm feels good even though you don’t know what happens biologically within your crotch. You want to think that love is a magical thing, but it might just be an enzyme that’s sort of spreading in your body that just makes you feel good, but it’s so much more fun to think it’s magical.”