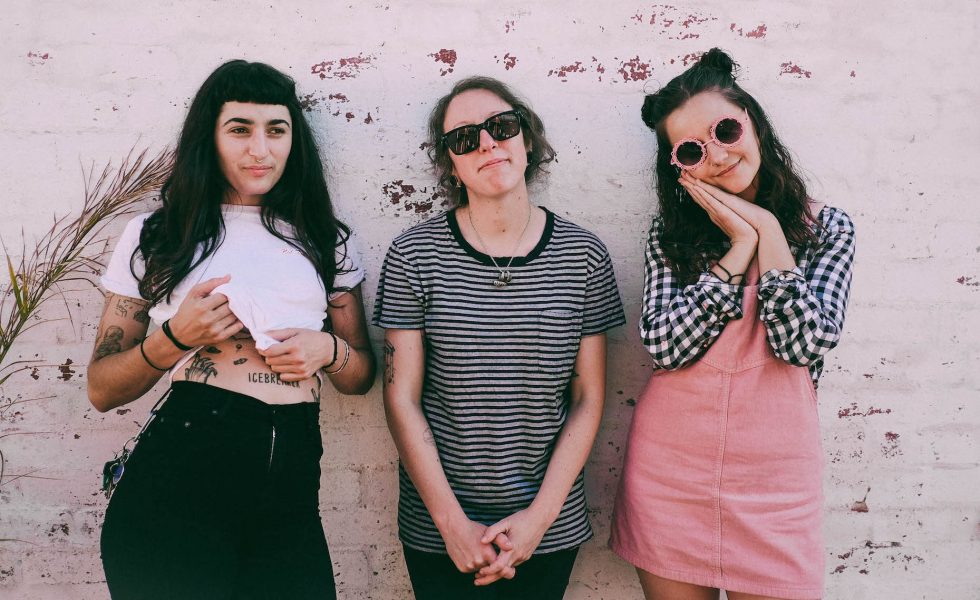 REAL TALK: CAMP COPE // The Punkest Band Right Now And There Is Nothing You Can Do About It!

Jan 05, 2018 / WORDS Max Jacobson / PHOTOS Promo by Naomi Beveridge / Live Pic by Ian Laidlaw / Camp Cope were doing Falls a favour by pulling in that size of a crowd.

Punk’s ethos historically has stemmed from ‘sticking it to the man’, revolting against a set of orders that don’t align with your beliefs and taking action through propagating the message through music. In the back-end of 2017, was there a band that did that any more than Camp Cope? Because we don’t think so.

Branding Camp Cope as ‘punk rock’ may be a tough one to swallow for some, we’re not even sure they would even like to be associated with punk music. Their music has the inviting warmth and clean tone of American Football, although with hearty vocals and candid lyrics that displays both confidence and openness, topped off with punk-influenced crashing drums from a previously skramz drummer, and unconventional bass-playing that sits upfront. With so many unique characteristics, they may not be punk in the same way an underground grindcore band are, but they’re fueled by unadulterated passion with a drive to make a proclamation. To us, that is the chief foundation of punk, and it’s rung loud-as-ever by these three women in a male-dominated scene.

Camp Cope go against the grain, they don’t try to blend in with the scene and won’t adapt their stance to the climate of the music industry. They’re more punk than your mate’s hardcore band.

Not only do Camp Cope hit hard with vocalising the need for change, but they’ve managed to turn the industry afraid of them for it. The issue of gender inequality in Australia’s music industry is real and thriving, audience member or insider, it is clear as day. Their unravelling of truth, with explicit detail on how they’re affected by it as females, has a certain sector of the music scene freaked out and retaliating by incorrectly accusing them of throwing some sort of tantrum. Promoters are scared to book them, and they’re anti-establishment actions have intimidated and alienated certain music-goers. This may mean a loss in opportunities, but that won’t weaken the band’s integrity, which in itself has drawn in some intensely devoted fans. Their inadvertent controversy, polarising nature and refusal to back down from their cause are indicators that they’re a great punk band.

Once the tabloids got a hold of Camp Cope’s performance at Falls Festival, the shamefully vitriolic reactions ran rampant, with the overarching opinion being that the band were ungrateful at the opportunity to be on such a bill. Here’s the reality, Camp Cope were not only talking about themselves, they were speaking on the general treatment of women in the industry by focusing on this current festival. It was a speech on behalf of all female acts who were given earlier set times, smaller stages, less pay, and who had felt restricted in what they could do or say on stage because of their gender. In fact, this interpretation that they aren’t grateful enough about playing at Falls showcases how females are made to feel like they aren’t worth as much and deserve less—because honestly Camp Cope were doing Falls a favour by pulling in that size of a crowd. Being misconstrued, being wrongly framed, or having others bash you down for your message; the burdens of the punk way of life.

Camp Cope go against the grain, they don’t try to blend in with the scene and won’t adapt their stance to the climate of the music industry. They’re more punk than your mate’s hardcore band, even if the music is more accessible, because the message doesn’t seem to be. They’re three legends from Melbourne who have something to say, and have fortunately developed themselves a platform to get the word across, without approval from anyone. That right there, is fucking punk rock.//