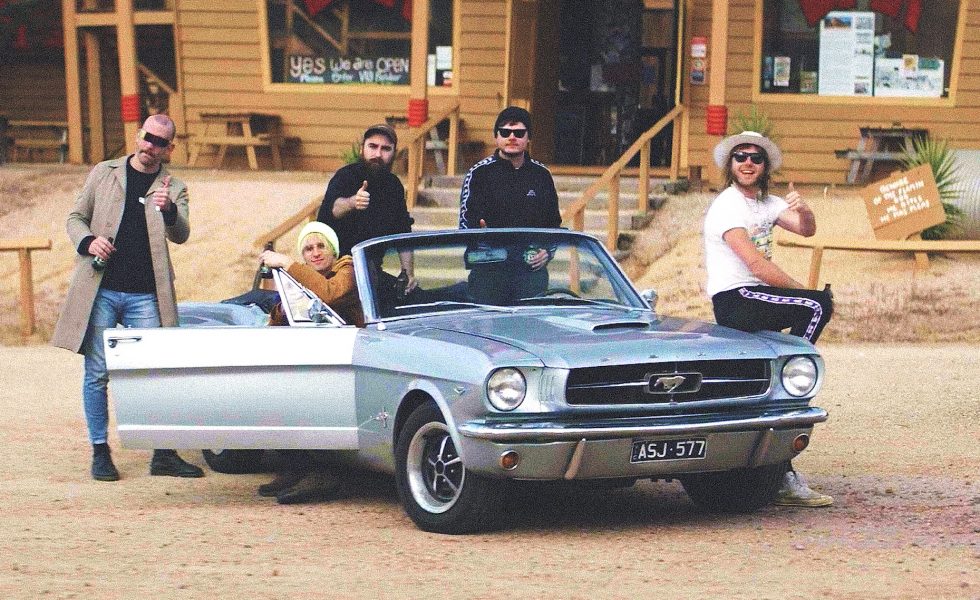 Coffee and exchanging pleasantries? Chris Penney is all about it. He’s also all about cheeky innuendos, sticking it to the man, and walking to the beat of his own drum.

A conversation with the Private Function vocalist quickly becomes an ridiculous, hilarious chat playing with metaphors, creative ideals, extracurricular activities and of course, the band’s second LP, Whose Line Is It Anyway?.

Private Function got the album written up in record time. Three days in the studio, Penney says that despite the rush – the band tackling various coronavirus related disasters that ultimately affected their line-up – the band haven’t sacrificed anything and this is his favourite album to date. “We never really fuck around too much when we record – we get in the studio and get things done as fast as we can.

“This one came out way better – we’ve gained way more, especially in the vocals. Harmonies, layering, stuff like that. I think it’s changed how we’re going to sound here on out.”

There is a rampaging sense of urgency in this album,  too, though when asked if he feels certain circumstances contributed to that element, Penney replies with a bright and bubble bursting, “Nah!”

What you can call the album – and indeed, the band that created it – is uncompromising. “We definitely do whatever we think, and we will do that,” says Penney. “We think of the stupidest idea and try and make it work – is that what it means to be uncompromising? I guess!”

Another excellent word to ascribe to Private Function is unconventional. The new album is straight up riff rollicking punk, no beating about the bush with anything borrowed from a sub-genre – and Penney likes that word because, he says frankly, he’s bored. “I’m bored of bands, I’m bored of music, and I think that every song’s already been written. Every song’s already been written better than I could ever write a song.

When you start focusing on all that crap, celebrity and fame, It blinds you to true art… or something like that. It’s all about self-censorship and always overthinking stuff and never leads to anything good artistically. So, I just say, ‘Fuck ‘em!’ Anyone questions me, I’ll bash ‘em!
[ Chris Penney ]

“How I approach musically is more conceptually – concept over quality,” he chuckles nervously. “The conceptuality of the band has to come before the music. And that’s the way we approach everything – everything has to have a concept.

“Every song ever written is with, what is it, seven notes? But the well of ideas is endless. So, if you can pull from that place, a place of creativity and concept, rather than a place of musicality, I think you can get things that are a little bit different.”

The most obvious difference here is the album title and how Private Function have played with it.  Definitive and striking, Whose Line Is It Anyway? pays homage to the comic sketch show of the same name, but it also offers up a cheeky glimpse into the sordid mindset of Private Function—an additional unconventional element. Cackling maniacally, Penney says, “and there’s also the song on the album Speed Bumps!

Uncompromising in their actions and life choices as well as their musical direction, it seems. More laughter, “I think drugs are important – they’re an important part of the human experience!

Recreational preferences, it transpires, may have hindered the creation of the album. “The allocation was $10,000 and we spent most of that on drugs!” More laughter ensues. “And that’s how we busted out the album in three days!” The new release is as timeless as Penney’s brand of humour. Nothing you can say about Private Function will now be able to get past drug metaphors now.

It’s been a rollercoaster for the band, not just the turnaround of their material but the recognition they’ve gained. No prospect of fame and fortune will rattle the boys, though, Penney saying they will inherently remain fun-loving. “I don’t have any genuine, grandiose beliefs that I’m going to be successful,” he says, “so I keep pottering on and doing what the fuck we’re doing artistically.

“When you start focusing on all that crap, celebrity and fame, It blinds you to true art… or something like that. It’s all about self-censorship and always overthinking stuff and never leads to anything good artistically. So, I just say, ‘Fuck ‘em!’ Anyone questions me, I’ll bash ‘em!”

Through the raucous laughter on both ends of the phone, Penney drives his point home. “Anyone pisses me off – bash! Anyone looks at me – bash!”

“Nah, it’s all good. You come to the shows, we all hang out, it’s really nice.” Penney is, really, a nice guy. An unconventional lack of grand ideas and an uncompromising friendliness is the ultimate in the Private Function appeal.