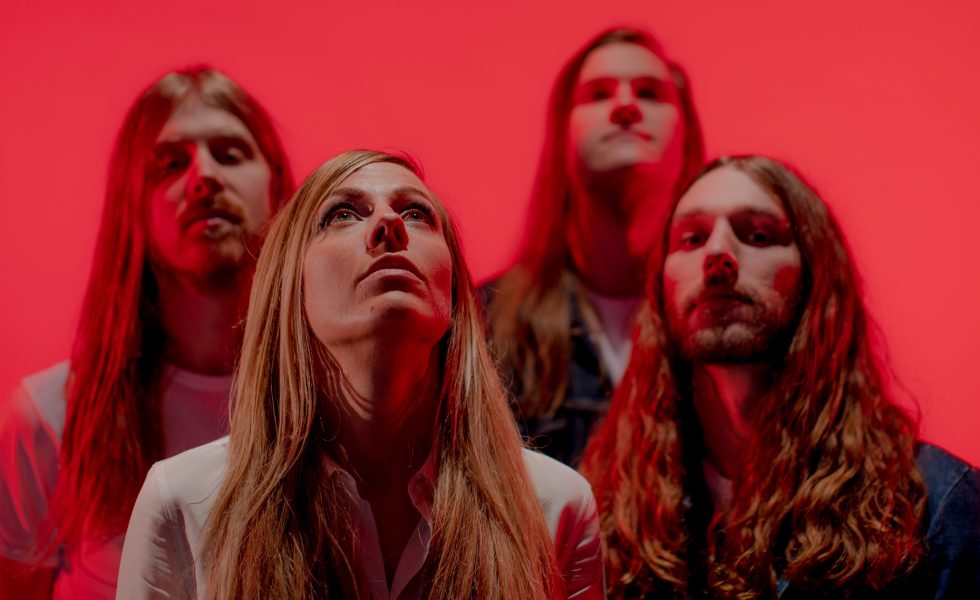 To paraphrase one of their songs, Blues Pills have felt a “change in the years” since their German #1 album Lady in Gold.

In the wake of the touring that followed, guitarist Dorian Sorriaux stepped down from the band, pushing Zach Anderson into the role from his previous capacity as bassist. Their music took a new turn too; a hard swerve back to the rootsy heavy rock and blues of their 2014 debut.

“We wanted to get back to the rock element of Blues Pills,” says vocalist Elin Larsson, “and have more of the live element this time.”

The three remaining Blue Pills, Larsson, Anderson and drummer André Kvanström, built a studio in the Swedish countryside and locked themselves away there. With Johan and Nicolaus from The Hives on engineering duties and general rock n’ roll guidance, the band just rocked out on their own terms.

“This time around I was writing music like the way I was doing it before I got signed, without all the pressure,” Larsson says assertively. “With Lady in Gold, that [pressure] was insane. On Holy Moly!, there was only me, Zack and André in the studio, and we were recording in the studio we built. It felt like we had the freedom we had before we got signed, no people’s expectations.”

None except their own. Coming nine years after the band grew out of a chance meeting between the singer and Anderson and original drummer Cory Berry in the wake of their departure from Radio Moscow, Blues Pills’ third album Holy Moly! is a swaggering rock and roll beast. The riffs bristle with a street-level grit and ferocity and Larsson attacks her role with a cocktail of soul and aggression.

“I recorded the songs when I was pissed off!” she says with a laugh. “I was pissed off, depressed and angry and I remember when we met in the studio, I just went, ‘Let’s write this as a big fuck you to everyone’. Which we sort of have! I think a lot of the songs came about because I was pissed off about everything.”

Possessed of the songwriting maturity of their previous album and the immediacy of the debut, yet earthier and more organic, Holy Moly! defines Blues Pills as a band comfortable in its own skin. At one with itself.

“I think that was one of the strongest feelings on this album, us not giving a fuck if we did a Gospel song, or if we’d written a country song or a punky song. It was just, ‘This is a great song, let’s record it”. And I think that has to do with us being in our own studio, and we were alone and we just matured and don’t give a fuck what genre we are in anymore! We’re very hard to put in a box… we’re not metal enough, we’re too much metal…”

So then a lot of people think we’re over 50 years old, playing the blues! It’s interesting. A lot of people get surprised that we are still all so young and playing this music!
[Elin Larsson ]

Their attachment to Nuclear Blast, a label steeped in tradition as a metal powerhouse, has doubtless caused their potential audience some confusion. One only has to look at the name or hear a few seconds of their songs to discover a band closer to Humble Pie or The Black Crowes than Helloween or Behemoth.

“Some fans probably think that because you’re on a metal label that you’re a metal band,” Larsson says, “but there’s also the fact that we have the word ‘blues’ in our name. So then a lot of people think we’re over 50 years old, playing the blues! It’s interesting. A lot of people get surprised that we are still all so young and playing this music!”

Playing their music is now what Blues Pills would most love to do. That likelihood is still quite far away. Sweden’s COVID-19 restrictions fell just as the band were about to start playing live for the first time with new bass player Kristofer Shander. Since then, they have only been able to rehearse. They have discussed the possibility of a live stream, but with everyone living in different places throughout the country, even that is proving difficult.

“If someone has a cold we can’t even really meet each other. We have restrictions. In Sweden there isn’t a lot, but we have common sense and if you’re sick you shouldn’t be going to another town.”

Larsson is still doing her best to stay creative and busy. She admits to not being very good at just sitting around.

“You take it for granted that you’ll be out on tour. You have this sort of lifestyle and now it doesn’t really mean so much in the end. When it comes to this situation, it feels like you are sort of worthless,” she says, but there are projects she has been involved in. “I’ve been collaborating with other artists in Sweden and outside of Sweden, which is a nice thing during this pandemic because you’re helping each other more and promoting each other.”

Until restrictions lift, Elin Larsson and Blues Pills will have to get used to just sitting around. But at least they have a very fine album to share with the world at a time when the world needs great, honest music.

“This record is written from the heart, and my vocals are sung from my soul and not from my brain. I think the difference between this record and Lady in Gold is that Lady in Gold was more brain – I was more of a thinker and I did more choirs and harmonies and stuff. This time, I just sang from my heart and my soul.”