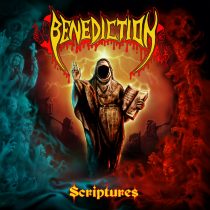 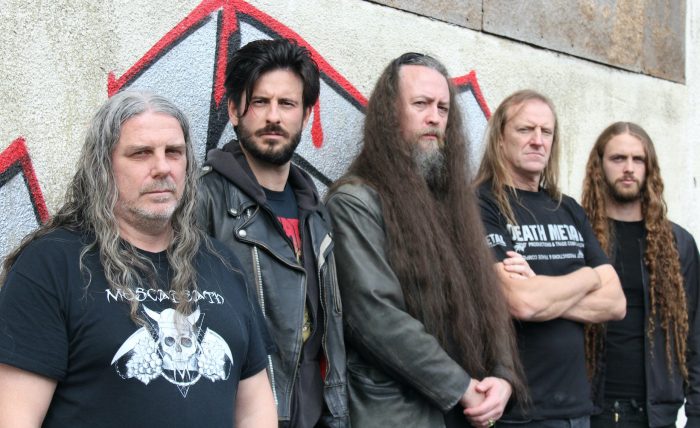 Formed in 1989, Benediction were releasing albums in the throes of the 1990s and have pretty much never released a bad album. Has it really been twelve years since Killing Music?

Indeed it has, and Benediction are back hailing the return of vocalist Dave Ingram, with him the sounds of some of Benediction’s mightiest albums of the early 1990s, including Transcend the Rubicon [1993], among the most beloved death metal albums of the era. With Scriptures, not only have Benediction delivered on the expectations surrounding Ingram’s return; they may have produced one of their strongest albums to date.

Scriptures has landed to reaffirm our faith in the potential of ‘old school death metal’ to be profound and memorable, forward-looking and far from old-fashioned.

Scriptures opens in classy style with Iterations Of I before launching into the dense death metal for which Benediction are renowned, being the flavour of the entire album. Tough as all riffs get, there’s nonetheless a rolling groove inside that carries you through. The sound is thick and satisfying yet detailed and clear. It is fantastic to hear such as strong performance from Ingram on vocals. Let’s be clear, there is hardly a weak moment in Benediction’s sound on Scriptures, and there are some gems in the works here. The Crooked Man is a character-filled song with a malicious swagger to it, sliding into a doom-like moment before re-firing up. Lyrically powerful and musically energetic, In Our Hands, The Scars is a thundering all-rounder of Benediction’s heavy bass-driven groove, mighty vocal presence, and enticing themes.

There are some tracks here that destroy, such as the single Rabid Carnality and the faster number Embrace the Kill, but the real majesty of Scriptures lies in Benediction’s mid-pace pulverising death metal. The epic edge and doom tendencies of Progenitors of a New Paradigm makes for one of the most lyrically memorable death metal tracks of the year. The discordant groove of Tear Off These Wings is enhanced by the prominence of the bass; an intriguingly darker track that speaks to that smouldering doom streak deep within British death metal. Closing with the sombre militant tones of We Are Legion, the crowning glory of Benediction’s full-bodied, grand heaviness, we are reminded that sometimes an album is released that exemplifies why something termed ‘old school’ genuinely is a lesson in how things should be done. Scriptures has landed to reaffirm our faith in the potential of ‘old school death metal’ to be profound and memorable, forward-looking and far from old-fashioned.

STANDOUT TRACKS: The Crooked Man, In Our Hands, The Scars, Progenitors of a New Paradigm

STICK THIS NEXT TO: Bolt Thrower, Memoriam, Morbid Angel