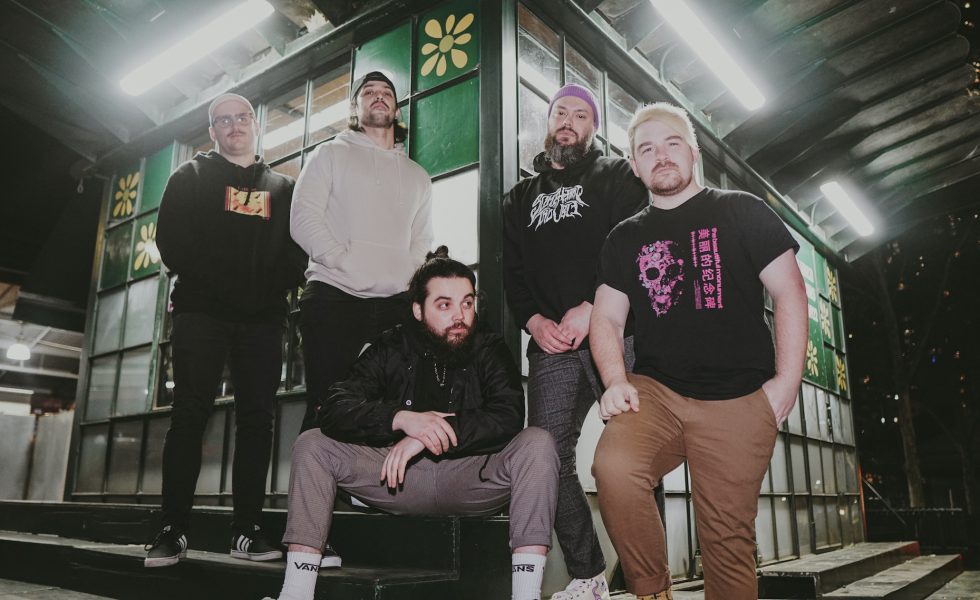 SOME HEARD TROUBLE // Talk Working With Callan Orr, Their First Vinyl Release And Their Newest Single.

There is a common misconception that people in bands don’t work and whilst that may be true for the small percentage of acts topping festival lineups worldwide, but for the vast majority life goes on, with music being more of a side hustle.

But that being said, when I jumped on the phone with Cam Brown, the burly and heavily tattooed frontman of Some Heard Trouble, I wasn’t expecting him to say he works an office job.

“I investigate fraud for a bank” he laughs, “some of the stuff that you come across is just ridiculous, you could write a book about it.”

Discussing the merits and hardships of balancing between a touring band and working full time Cam stated,

“I feel like if you don’t work you lose touch with having real life experiences.”

“If a band writes a great album and they are all working while they make that album, and then they get big enough that they don’t have to work anymore, they often start writing about different things which aren’t as relatable as the working class album that got them big.”

Although, Cam also concedes that not every boss is as cool as his.

“I’m pretty lucky to also work with Josh from Drown This City and have a manager who used to always go to shows in Brisbane, when I told her I was in a band she was really cool about taking time off for shows and everything.”

If the band ends, it ends. But if we can get our message out before then, then we have already accomplished more than we thought we would.
[ Cam Brown ]

Having released their debut EP Scorpion last year to a rave reception, 2021 has seen Some Heard Trouble working with the revered Callan Orr for their newest track Hivemind.

“I think he’s one of the most talented producers in the scene” remarks Cam. “He’s hard to get time with though, I think when we were tracking the reimagined stuff he was already booked out for the rest of the year with JJ; Earth Caller; he did the new Blood Command vocals with Niki from Pagan as well, which is a band I think that band will absolutely blow up and get massive. His career is going really well and I’m so happy for him and happier to work with him.”

Having already stated that the group’s newest single is a “product of the pandemic”, Cam further discussed how the manipulation of mainstream media during the pandemic affected him lyrically and how different protests influenced Hivemind.

“For instance, when the BLM movement was happening and people were bringing out charity shirts; I know it’s a bit corny to a lot of people but I love wrestling and I saw that a lot of wrestlers were getting involved with the movement as well. Again, just all these niche cultures crossing over and helping each other, whereas the mainstream media seemed to be quite disconnected from it all.”

“I kind of lost the plot thinking about it all.”

With the group’s first vinyl release gearing up for it’s drop and a handful of new songs in the works, it seems like there’s a lot to look forward to for the Melbourne hardcore outfit, but for Cam, it’s all still just a bit of fun and a nice reminder of the time he’s spent on stage with his mates.

“I think for a few of us, this might be our last band, so in 2018 we wrote a bucket list of what we want to accomplish which we have been adding and crossing off things to. It’s been an amazing journey already.”

“If the band ends, it ends. But if we can get our message out before then, then we have already accomplished more than we thought we would.”