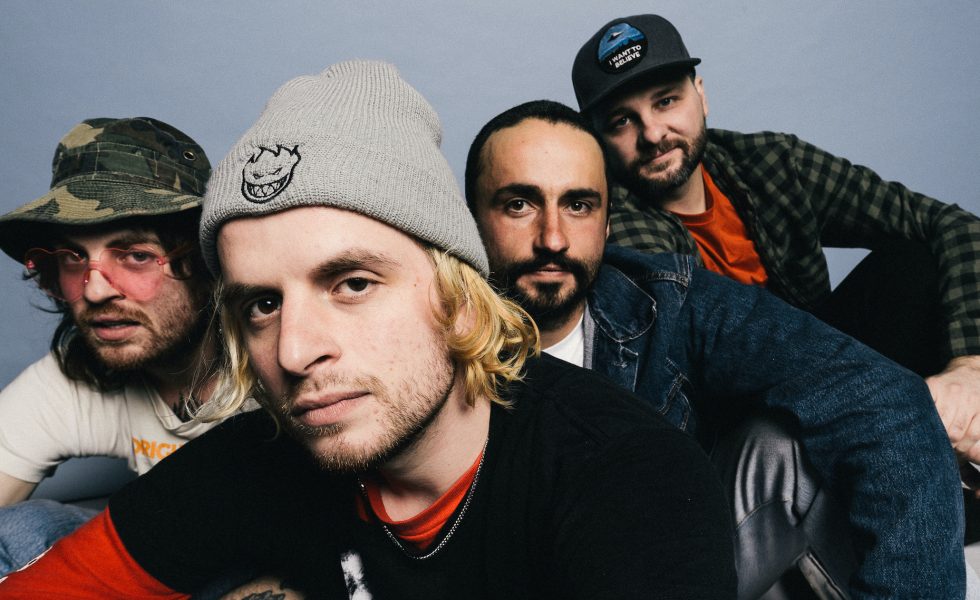 Is it too late for LOSER to rebrand as WINNERS?

The Melbourne based band have gone from strength to strength in recent years and now have strolled right down memory lane with their ‘uge second LP, All The Rage. We caught up with vocalist Tim Maxwell and bassist Craig Selak to chat about how it all came together.

Hysteria: Let’s get straight into the upcoming album, All The Rage. It’s very nostalgic; what made you want to follow that path?

Tim: A lot of our first album was inspired by the 90s. On this one, we dug into the past again. This time we got influence from bands like Green Day, Blink-182 and The Offspring. We wanted it to have more of that pop-punk/pop-rock attitude while still incorporating bits of grunge.

Producing it must’ve been such a massive experience. How’d it go?

Tim: It was awesome because we had so much time to do everything. Craig and I would work on something for a few weeks and then come back to it with fresh ears and fresh ideas. On the other hand, it sucked because it’s hard to get motivated when you do work by yourself. I felt that at those times Craig wasn’t around, and we’d have to get together on Zoom or whatever it was. Pretty 2020 (laughs).

And what was it like working with Anton Hagop?

Craig: It was really special for us, not only as first time producers. Having him on felt like we had a safety net. Typically, we would do what we thought was cool, but that doesn’t always work out. It was nice to have him putting his majestic mix on things, but he also validated that Tim and I could do things properly, which was nice. It was a bit scary at first. When we sent the first few songs to him, we just thought, shit, we hope this cuts the mustard. It gave us a lot of confidence when he came back and said, keep going, you’re doing a great job. We felt like we could trust our gut for the rest of the album.

Tim: We found him by accident, honestly. Through listening to another band. We got a quote from him and got him to mix our first single, and we were blown away.

Craig: The fact he’s worked with Powderfinger was also great. Both of us are fans of them, and Silverchair, who Anton’s also worked with. It was a dream come true to have someone of his stature working on our stuff. There’s a song at the end of the album called Meant to Be. One of Tim’s favourite albums is Odyssey Number Five, and I know that was heavily on his mind whilst working on that song. When we went to produce it, we very much made it an ode to Powderfinger. It was a cool full-circle moment.

Tim: It had a really different arrangement at first. But it was great to have Anton’s feedback. We ended up stripping it back. Compared to a lot of the other songs, Meant to Be took a while because of that. I think those changes made the Powderfinger influence come through even more.

To be 35 and feeling like I’m playing the most relevant, exciting music with the best group of musicians ever is so special.
[ Craig Selak ]

What’s something people don’t know about the recording process of All The Rage?

Craig: I’m not sure if many people are aware of this, but we actually have two different drummers on the record. I think it’s pretty cool though. When we first started recording, we still had our original drummer Chris Cowburn. During the year that was, he became a new father and had a lot of other things on his plate, so he decided to step away. We were sad about it, but we’re all really good friends. He was just at a time of his life where stepping away from writing, recording and performing music was the right call.

Our guitarist Jake “Cutter” Farrugia, became our drummer. As it turns out, he’s actually played them his whole life, and he’s amazing. It was cool to have two amazing drummers on board and one of our members switching during the process. They’re both extremely talented, and from an internal point of view, I can tell the difference, but I reckon a lot of people will struggle to figure out who drummed on what song. That’s a credit to both of them. And to our friendship, and how we could navigate that and put out something cohesive that meant a lot to all of us.

Tim, you’ve spoken about being less metaphorical with your lyrics this time around. Was that scary?

Tim: No, it felt like a huge growing experience. Craig helped me a lot through it. Getting it off my chest made me want to be more vocal. There are a lot more raw lyrics here, but it felt natural. It felt good, rather than feeling like I was hiding something or was ashamed of anything.

You’ve spoken about wanting to make an album that 15-year-old you would’ve loved. So what would you say to 15 year old you from the position you’re in now?

Craig: I’d say stick with it. This shows my age, but I think I played my first gig at 14, which was still in the 90s. To be 35 and feeling like I’m playing the most relevant, exciting music with the best group of musicians ever is so special. I would just tell that guy to keep his head down and bum up and not give up.

Tim: I’d say something in the same vein. Craig and I have been playing in bands for most of our lives, and it takes a while to get somewhere. It’s easy to give up, but we won’t.