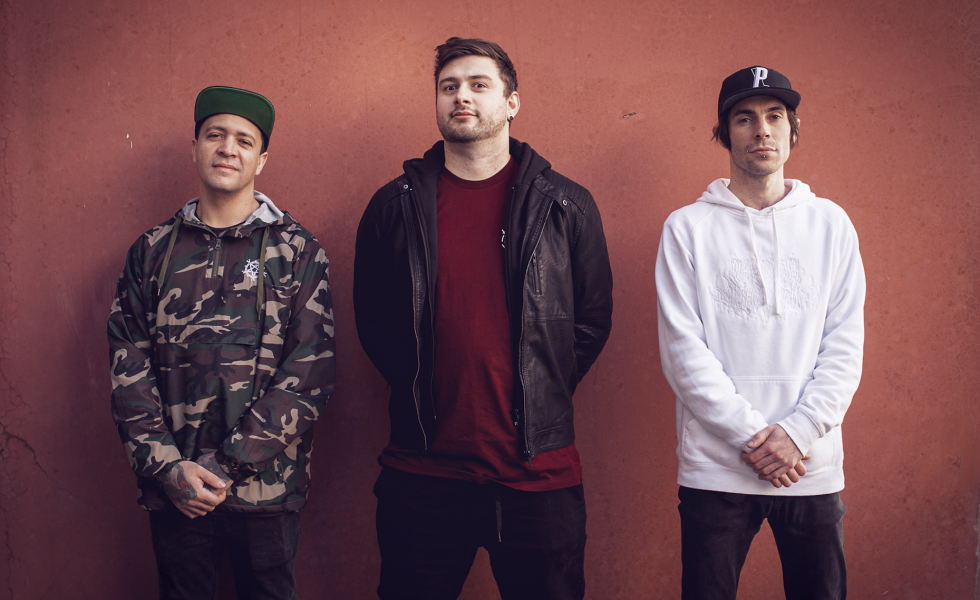 Considering Drastic Park’s penchant for self-deprecation, the band sure are good at what they do, and that is crafting a solid jam.

MORE: LOSER: Call Them Winners // BLOOD COMMAND: Nikki Brumen Discusses Pagan, Blood Command and Why ‘The End Is Her’ REVIEWS: TURNSTILE: Glow On // LOSER: All The Rage // THE DEATH SET: How To Tune A Parrot // SPIRITBOX: Eternal Blue // THE PLOT IN YOU: Swan Song // ALIEN WEAPONRY: Tangaroa // THRICE: Horizons / East // DRASTIC PARK: Snakes and Ladders

Case in point, their latest effort, Snakes and Ladders—a celebration of the golden era of pop-punk and a love letter to their fans and haters alike. Before its official release, we got vocalist/guitarist John Stokes to run us through the band’s history, the track itself and most importantly, their favourite dad jokes.

Hysteria: For our readers new to the band, what’s the Drastic Park story?

John: Me and my cousin Chris (Tannahill, vocals/bass) started the band. We were in so many failed bands before, there were always things like one member not sharing the same goal, and it didn’t work. We sort of gave up for a bit, but then I started writing a song and sent it to Chris, and he was really into it, so we decided to give it one more crack.

Originally, we just looked at it as a hobby. We had other things going on in life. We eventually had some band coaching from a guy named Steve Cannatelli, and he encouraged us to do something saying our music was sick. Our original drummer left to focus on the band he was already in, and then things picked up when we met our current drummer, Joe Larwood. We played a few shows, COVID hit, but we decided not to let it get to us. We made a whole bunch of music, including our Imposter Syndrome EP, completely created in lockdown.

I think we always had the wrong idea of who we were. We took things too seriously, but recently we discovered it’s more fun to be ourselves. That’s what we’re doing with Snakes and Ladders. We’re taking a step back and are embracing who we really are. We love having a laugh, and that’s starting to show more in what we’re doing. With our genre, it’s hard to explain. Everyone lumps us in with pop-punk, but we take elements from everywhere, especially hardcore and punk.

That band name, what inspired it?

We’re right for once!

It’s my favourite movie! We didn’t really float out many ideas for names. I just said Jurassic Park, and the boys liked it. It’s been both a blessing and a curse, it’s been terrible for SEO, but everyone always mentions it’s a great name, and it does make us stick out. There’s no real meaning to it; bar me being a sucker for a dad joke. Chris and I both love puns. All our chats are plays on words, and I think that’s part of the reason Drastic Park stuck. We knew it was a good one when Josh Merriel played our first single on short.fast.loud, and laughed at our name.

Onto the new single Snakes and Ladders! We love how positive it is; let’s dig into what inspired it?

I wrote the chorus a while ago. I was copping it from people, not necessarily on our music but on other things in my life. I took that to heart, and I decided to sit down and write these lyrics. They served as a reminder to not let anything like that get to me again. Over time, it’s turned into the band’s mantra. Being a pop-punk band, we cop it a lot, but we don’t worry about it anymore. That inspired me to jump back onto the track and spice it up with some heavier riffs. Like the lyrics say, to us, the song is about embracing the hate. We thought it spoke well to our audience, who also like to have a joke about us. We welcome that with open arms.

We want to remind everyone that we’re not guys they have to look up to. We never will be; we just want people to be on our level. That’s where the song came from. It was written for us, but also our fans.
[ John Stokes ]

We’re on good terms with our actual haters. After a show at BANG, we had a guy from our trashposting group come up to us. He said he couldn’t stand our music, but he loved us and wanted to come to every show because of that. That’s been a big win for us. We’ve been lucky enough to play some shows this year, and we’ve always had people in the crowd shouting out fuck Drastic Park and having a laugh. We get our audience involved, and we’re involved with them too. We jump in the crowd and have fun. We want to remind everyone that we’re not guys they have to look up to. We never will be; we just want people to be on our level. That’s where the song came from. It was written for us, but also our fans.

The band’s been super busy during the lockdown era. How have you been staying motivated?

Personally, I’m a music recording junkie. I live for it. I prefer it to shows! I’m obsessed with watching something come to life before your eyes. I’m a creative person, and if I think back, I’ve gone from drawing and creating things with Lego as a kid to this. That’s what drives me the most.

It might be a bit different for the boys. Joe is all about playing shows, for example, and Chris is a bit of both. I’m in my late 20s, and the boys are in their early 30s. When we saw people liking our music, that drove us. We also realised this could be our last chance, so we wanted to go all out on it. The best part of it all is we’re best mates. We all talk every day, never argue and are on the same wavelength. It’s a no-brainer why it’s still going.

Give us a memorable moment from the writing/recording process?

Originally the song had no heavy parts. It was very pop-punky. It had this riff that was played through the whole song. It’s still there in some parts, but we experimented with it because we were trying not to be too poppy. We started adding grungier chords and realised it made the track sound heavier, almost like Boxcar Racer. From there, the song evolved to what it is now, with that breakdowny middle and heavier beginning. It became a song that better represented the direction we’re moving in. That was a big turning point for us. Adding a finger to the chords changed it so much.

You’ve developed quite a reputation for your social media meme kings status. So hit us with your best dad joke.

Oh my god (laughs). That’s so on the spot! The issue is I can only think of the bad one where it’s like: Hello hungry, I’m dad. Chris and I always pile on the dad jokes, but it’s always bouncing off something someone will say. The trick is to take what someone says and make it stupider. Hello hungry, I’m dad is the ultimate one though, it’s the template for everything.