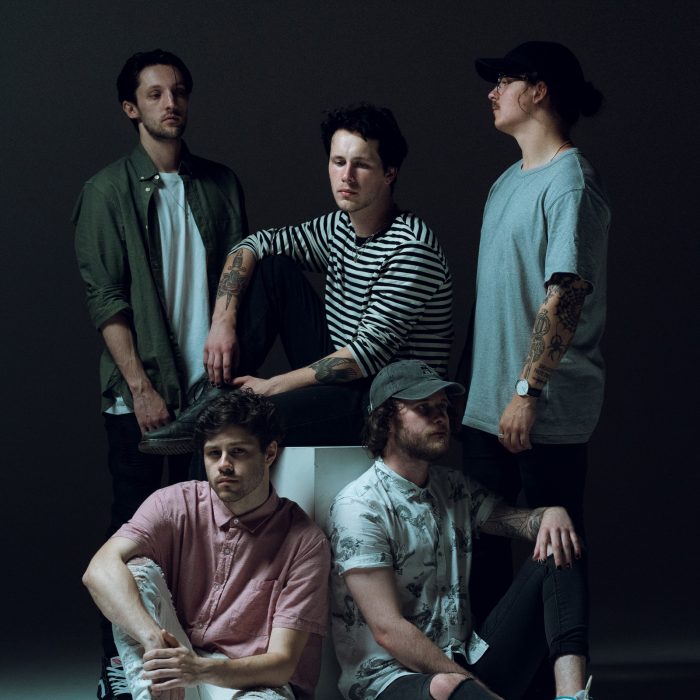 The secrets out! Alera has finally revealed the meaning behind #HAUNTINGME.

Earlier this month, the up-and-comers shared an acoustic take on their track Failure. And with it, a link to an exclusive puzzle-piece style mail campaign. Now, they’re ready to share the full picture in the form of their latest single, Bleak. But don’t worry if you didn’t crack the code in time! Because we got co-vocalist Hayden Oakley on the line to chat us through everything. Read on.

Hayden: We are Alera, a five-piece post-hardcore band. We’re doing the double frontman thing with Matt Ashley, who used to be in To Octavia, doing the screamed vocals and me doing the cleans and bits of screaming. The band’s been five or six years in the works. Now, we’re finally ready to bring what we’ve been working on out to the world.

Storytelling and community interaction are clearly important to the band, which leads us to our next question. We’ve been following along with the cryptic letter clues you’ve sent out, and we’ve uncovered a pre-save link. How’d you come up with this amazing idea?

It came together pretty naturally. We had this really strong concept for The Covenant and the story we wanted to tell through the release of our music. There’s an artistry that comes with the way you present yourself to the world, and we wanted to lean into that. We started things off digitally with our viral campaign earlier this year, but we wanted to breach into the real world in the ways that we could. We were going to have shows, and things might’ve been different if that happened, but I feel like it turned out how it was meant to.

For the most part, the letter campaign itself was reminiscent of pieces of pop culture we’re interested in—things like mystery novels and early internet events like Cicada 3301. We pulled from all these cool sources and put them in the mail-out campaign.

It’s a song about dealing with mental turmoil. I don’t want to get too dark and heavy, but it delves into not being able to see the light at the end of the tunnel.
[ Hayden Oakley ]

Can you explain the mail-out campaign for those who didn’t have the chance to follow along?

There’s a page up now. We’ve had it around since we shared the acoustic version of Failure. The link to it is here. If you jump on, there’s a form you can fill out. Then the wheels start turning on our end, and eventually, you’ll get a letter in your mailbox. From there, you have to piece together the clues. We have a community built up now on Discord, and they’ve been working together to solve it. With their help and your letter, you can solve a cryptic puzzle and then end up with the pre-save link for our new track, as well as some interesting things to uncover.

Can you spill the beans on the single itself?

This track is significantly heavier than our first one. It’s called Bleak, and it’ll have breakdowns and heavier vocals.  It’s coming out on the first of October, and you’ll be able to pre-save it here.

For the most part, much of what we’re doing in this band is reaching back to the music we grew up loving. That earlier post-hardcore sound with bands like Escape the Fate and then layering on newer influences. Lyrically speaking, it’s a song about dealing with mental turmoil. I don’t want to get too dark and heavy, but it delves into not being able to see the light at the end of the tunnel.

We hear there may also be a music video.

It’s more of a visualiser. If you’re paid attention to what we’ve put out so far, you’ll definitely see a narrative connection between them.

Definitely one to keep the detectives going! Before we let you head off, we know you’re a band so shrouded in mystery, but can you share any details of your next steps?

Honestly, just keep your eyes peeled for new music. We have plenty more in the tank, and Bleak is just the first step towards an exciting era of Alera music.