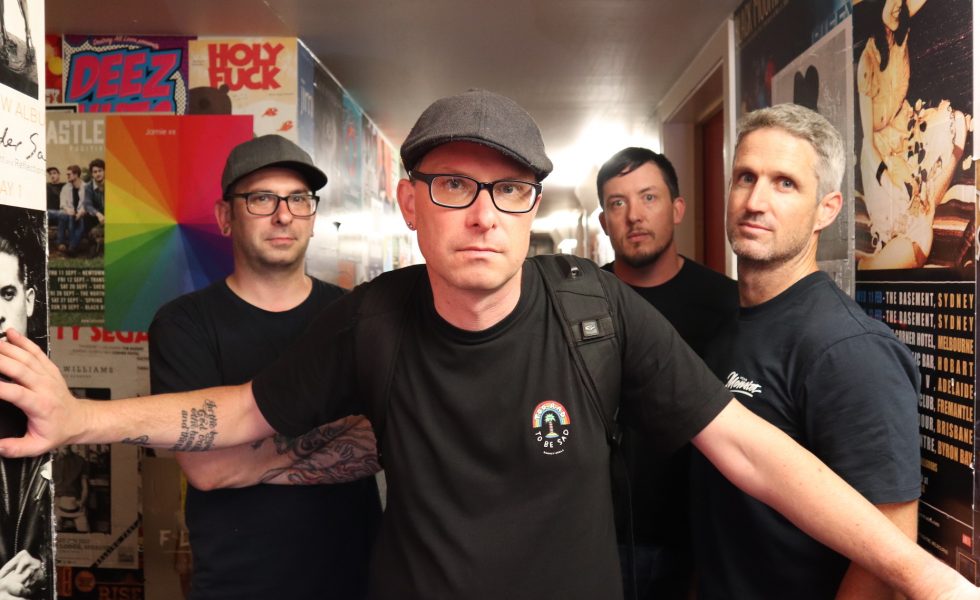 WISHFUL THINKING // Wishing For The Best: An Interview With Alistair Elkins Of Wishful Thinking

Since the formation of Australian pop-punkers Wishful Thinking in 1998, the four-piece were the first band signed to Boomtown Records where they’d distributed several releases and had a couple of subtle line-up changes which were followed by a hiatus between 2006-2019.

MORE: THE GHOST INSIDE: Coming Back Swinging // KICK OUT THE JAMS with Stepson REVIEWS: AVERSIONS CROWN: Hell Will Come For Us All // BOSTON MANOR: Glue // EBONIVORY: The Long Dream I // PALAYE ROYALE: The Bastards // JUSTICE FOR THE DAMNED: Pain Is Power // THE GHOST INSIDE: The Ghost Inside // LAMB OF GOD: Lamb Of God // WISHFUL THINKING: Time To Be Alone

Despite members now having families and while some of them have even moved interstate from Melbourne, they brought their lengthy absence from the pop punk scene to an end last year and re-banded with a new sort of lens that has honed in on their roots, thus they’ve been welcomed back to the melodic genre with long anticipated appreciation.

Speaking to bassist Alistair Elkins about what sparked the decision for Wishful Thinking to reform, he says that “Triple J’s Short Fast Loud played a couple of our songs in 2019 and Carl [Jackson], our singer, got a few phone calls from friends saying ‘They’re playing your band!’ and he thought that was cool and then, I don’t know, six months later Luke from Chopdog Entertainment contacted us and asked if we wanted to do a tour with Area 7 and The Porkers. We didn’t think that anyone would show up for us but we thought it was a great opportunity to get back together with some of our best friends and play music again, then we did and it went really well, so we thought, ‘why don’t we do this all of the time?”

Originally we were a punk band and our sound kind of matured and all that along the way and now that we’re back we’re kinda immature again.
[ Alistair Elkins ]

We reflect on the influences and personal changes that’ve been a part of the bands reformation, to which Elkins notes that “It’s probably more back to the roots of what it was when we started since being back together. Originally we were a punk band and our sound kind of matured and all that along the way and now that we’re back we’re kinda immature again.”

We agree that that’s more than alright, as Elkins continues, “Too much in our lives is serious. We’re all dads, we’ve got jobs and all of that, so it’s a chance to be young again so it’s probably a little bit less, a lot less serious now, we like to just have fun and have a good time and do what makes us happy.” And that’s what music is for a lot of us, as musicians and fans, to which Elkins says “If it wasn’t fun it just wouldn’t be worth the hassle.”

Moving into the growth of their lyrical and musical development, Elkins admits that “Unfortunately I’m not a major song writer at the moment. Most of the new song writing Carl has done. I think he’s channeling his youth and that. He’s married with children but writing break-up songs and stuff, so, I think he’s just channeling the bands that influenced him in his youth and the thoughts behind that.” We then tune into his motivators as a bassist, where he cites that “I’m not trying to be anyone anymore. When I was younger I was probably a lot more influenced by people but now you just kind of pick up [a bass guitar] and do what you can do in the time that you have. For me it’s a hobby now, y’know when we were younger we were chasing it like a career and it was serious and all of that but now it’s just fun so I guess that’s free in a way. I’m not concerned that a label won’t sign us if the bass line is too busy or anything. We’re free to just do what makes us happy.”

“A lot of these songs, Carl has just, like all song writers, has just kept writing songs whether they’re in a band or not and now that the band is back together he’s got an avenue for them to get out there so if one person hears them it’s better than what he thought was gonna happen with the song. Everything is just so positive and we’re so happy with every single achievement because we expected none of it.”

Between laughter, Elkins wants to confirm if that makes sense, which it does, to which he summarises: “We thought nothing was going to happen and now everything that happens is good because we’re friends. We get to hangout, we get to make music, there’s no downside at the moment.”

While the future of live music is unpredictable, Elkins confirms that “We’ve got another single coming out called The Wrong Team on July 10th and that’s got a guest vocalist on it … it’s a secret at the moment so I can’t tell you who that is but it’s just more fun; more pop-punk. Time To Be Alone was definitely the shortest, fastest song on this new release, like it goes for a minute and 23 [seconds]. The rest of the songs are a bit longer than that and maybe not as fast but still along that pop-punk, nineties skate-punk vibe.”

The next best thing that fans of Wishful Thinking can do as they await their impending national tour is anticipate the single release, which, if all goes to plan, will be followed by a full-length album release that Elkins says they’ve “Been talking about what songs would suit and what direction and all of that stuff. It’s definitely something that we want to do. Obviously, y’know, Corona’s put a big halt on everything. We’re not touring anymore and we actually all live in different states, so all of our jamming and song ideas are just recording and sending tracks to each other. We’d love to get together and get in a jam room for a week or so when Corona’s over and see what direction that’s going to go but an album would be awesome and we’d love to do that.”

As we all  eagerly await for life after the Coronavirus pandemic, be sure to keep an eye on Wishful Thinking’s social media pages to stay up to date with future releases and rescheduled shows.