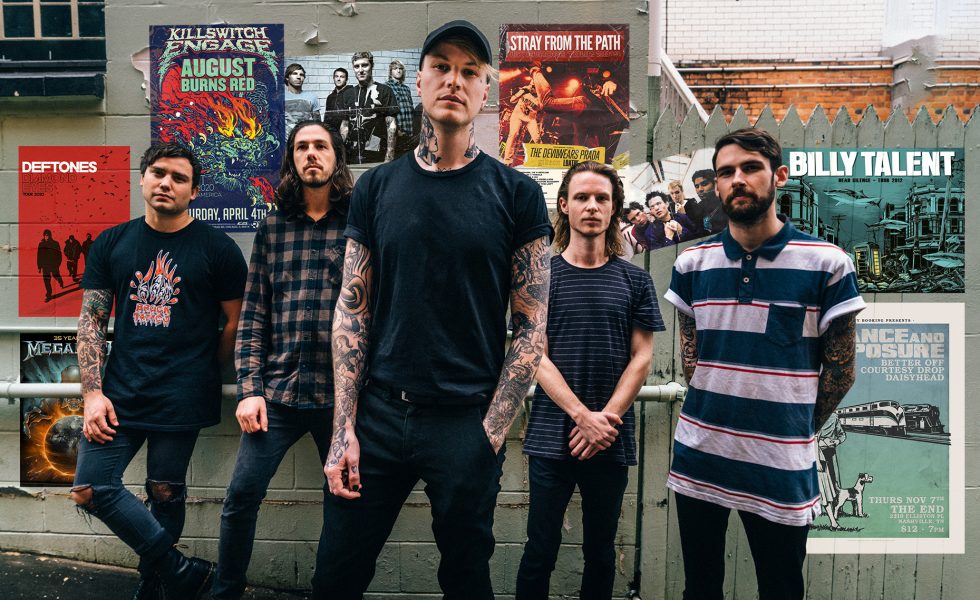 KICK OUT THE JAMS: STEPSON // Setting Fire To Bitterness

2020 might be a write-off for most of us but for hardcore fans, it’ll be the year these Brisbane boys released their clamoured-for debut album, Help Me Help You.

MORE: PARKWAY DRIVE: Triumph Of The Underdogs // KICK OUT THE JAMS With WAAX REVIEWS: VIOLENT SOHO: Everything Is A-OK // ENTER SHIKARI: Nothing Is True & Everything Is Possible // THE BLACK DAHLIA MURDER: Verminous // TRIVIUM: What The Dead Men Say // BOSTON MANOR: Glue

We’ve not heard much from the Stepson camp since 2017’s EP The Beautiful Lie. We have seen them take stages with big names: Polaris, In Hearts Wake, I Prevail, While She Sleeps, Counterparts, Stray From The Path, Ocean Grove, and Hellions. For this album, they inked a deal with US based SharpTone records, giving them freedom to spread their message far and wide. The album itself is produced, mixed and mastered by Callan Orr of Avalanche Studios (Dream On Dreamer, Young Lions, Hands Like Houses).

A title fitting for a time where there’s seemingly nowhere safe to hide, Help Me Help You will be a clarion call for us all to do better and help our fellow brother and sister. They’ve thrown us a tasty morsel from the album to celebrate its release sometime this winter: Run. The stark video with confronting images is one that fans will keep in their memories for years to come.

Sitting down with the lads, we poked around in their minds to figure out just what jams inspired the album; classics, newies, and everything in between.

This song is special to me as it signifies the death of something I poured my heart into, while also presenting a massive opportunity to continue doing something I love. It was the bridge that I really needed to cross and I couldn’t have done this without this band and song.

I remember the first time I heard this song because it was getting pitched to me to be a cover song in a set with a previous band and I was instantly hooked. The guitars and vocals perfectly meshed to create a haunting atmosphere dripping in reverb. The minimalistic approach to songwriting has always been very appealing to me as it allows you to pick apart every section to its core to really understand what message is being conveyed.

As you’ve probably guessed by now I am constantly drawn to slow, melodic, build type songs that feature dreary vocals. I feel like I relate most to these songs as they display emotion as raw as they possibly can. No bells and whistles. Just pure devotion to the words they sing with every part of their heart and soul.

Growing up in a small country town I didn’t have any real musical influence growing up; my parents aren’t musical and none of my friends were. I always gravitated toward the ‘punkier’ side of music when I was younger (probably due to the countless hours sunk into Tony Hawk Pro Skater 2 on the PlayStation) but it wasn’t until I reached high school that music started consuming everything I cared about, I was introduced to Sum 41 and they became my first ever favourite band. I can’t imagine how many times I listened to their album Chuck back to front and this band is the reason I picked up a guitar when I was 13.

Blessthefall – What’s Left Of Me

The first album I was ever given was Kelly Clarkson – Breakaway, but the first HARDCORE record I ever got/bought with my own pocket money was Witness by Blessthefall. Think I saw it for sale at sanity and remembered seeing Blessthefall being in Escape the Fate‘s top friends on MySpace so I wanted to suss it out. The album’s heaviness blew me away and I thought it was SO cool that all the screams on the record was from the bassist of the band. So naturally I started trying to learn how to scream and promptly bought a bass. A decade down the track I now play bass and do vocals in my band so 15 year old me would be frothing!

As I mentioned earlier, I grew up in a small country town with NO music around, I remember hearing friends at school talking about a hardcore concert happening at Byron Bay (45 min drive from me). They said the band was a local band called Parkway Drive who were getting pretty big. I listened to them and thought it was sick; but their songs with ‘full screaming’ was a bit heavy for me. I begged my parents to let me go to the show with friends and thankfully they let me go to what would be my first ever concert. I stood in that room absolutely gobsmacked by the energy and feeling I got from live music & Parkway Drive blew me away. I remember standing in awe watching them at the age of 14 and thinking, this is the only thing I ever want to do in life. 12 years on I’m about to release my debut album, toured my home country multiple times and soon to head overseas, all thanks to that defining moment at Byron Bay High School. I have Parkway to thank for lighting this fire inside of me, forever my favourite band and biggest inspiration. If five surf bums from Byron can do it, why can’t a little country kid from just down the road do it too, right?

Killswitch were the band that really made me excited to play guitar. Not only is Adam D a madman and riff wizard but I don’t remember a froth moment like watching this song live and having Adam and Joel rip pinchies in a call and response. To me Killswitch Engage opened my eyes to being able to sound super heavy but also melodic and beautiful at the same time, which was a game changer for me.

I think Counterparts were the band I was always yearning for. They’ve been the biggest influence on my writing ever since 2013 when they put out Hell and Home and I think Compass best encapsulates how dissonance and melody can create something special and I’ve turned to these guys for inspiration in my writing ever since. My number one band ever.

My favourite album of all time is Separation and choosing a favourite track is hard, but Defeat the Low is a great example of using dynamics to really make you feel something. I love the ebb and flow of this song as it builds and builds to the super nice outro and the more melodic/calm Stepson moments have been heavily influenced by this release

Billy Talent – This is How It Feels

This is the first ‘big’ international band that I got to see live after begging my mum to let me travel to Sydney to see them at Metro Theatre in 2007. I will never forget that show. I had never seen a full room push pit before. The energy in that room was absolutely unreal, not a single person wasn’t screaming the words to every song. It was punk, it was raw and it blew me away. From that moment on I knew I wanted to be in their shoes, I wanted to rock the fuck out on stage just like they were.

My dad bought me my first guitar when I was about ten. It was an old acoustic he refurbished. My dad wasn’t a big muso but he knew I loved guitar and encouraged me to pursue it. When I started high school everyone was into metal and had electric guitars, so I saved up all my pocket money and bought myself one. An Epiphone Les Paul Special. Looking back now, it wasn’t the best guitar but it was my pride and joy. Every day we would rock up to school excited to show each other what riff we learnt the previous night from some of our favourite metal bands. Iron Maiden, Megadeth, Slayer, Pantera, Anthrax. Anything that had mad riffs to bang your head too. This was long before I even knew what a ‘breakdown’ was.

As I grew out of my metal phase I was looking for something new that would blow me away. A friend showed me Stray From the Path’s album Make Your Own History and it did just that. This album still remains in my top three albums of all time. It opened my whole world to the term ‘heavy’ and I still spin it regularly. The heaviest thing I listened to before this was Parkway Drive but these guys at this time in their career were on another level.

As a kid I used to buy drum magazines as I was obsessed with learning about all aspects of drumming. I stumbled across an article about Abe Cunningham the drummer of Deftones. I jumped on to YouTube straight away and was instantly hooked. The heavy and the soft, the soaring vocals and the intricate drum performance really caught my attention and it was something new I’d never really heard before. This band changed the way I looked at music and shaped my playing from then on.

The single most important Australian band for me. It’s been a huge influence. One of the most played bands in my playlist for the last 10 years. I try and catch them on tour as often as I can as they are next level. How good is Ian Kenny?!

This band were way ahead of their time. I first remember hearing this on Tony Hawk Underground and it is always a track I spin still to this day. Released in 1998, the band broke up that same year. Throughout the years the band developed a dedicated cult following. The album The Shape Of Punk To Come is a masterpiece and still very relevant to this day. Definitely worth checking out!