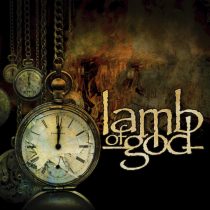 It’s been 5 years since Lamb Of God last released an album, and in the face of America’s most divisive presidency, an unprecedented pandemic, economic destruction and the most wide spread civil unrest in over 50 years; the more things change, the more they stay the same.

MORE: THE GHOST INSIDE: Coming Back Swinging // KICK OUT THE JAMS with Stepson REVIEWS: AVERSIONS CROWN: Hell Will Come For Us All // BOSTON MANOR: Glue // EBONIVORY: The Long Dream I // PALAYE ROYALE: The Bastards // JUSTICE FOR THE DAMNED: Pain Is Power // THE GHOST INSIDE: The Ghost Inside

The first album without founding member, drummer Chris Adler; the biggest initial surprise with this self titled effort is just how little his absence is felt. Adler possessed what you’d safely call an inimitable drumming style, up there with genre legends like Vinnie Paul and Gene Hoglan for immediately identifiable drumming.

Yet new guy Art Cruz has seamlessly replicated Adler’s precision, splash heavy attack with impressive accuracy. Sure, it’s a carbon copy of what already existed and doesn’t contribute anything new to the band’s cannon, but if consistency was the goal Cruz has delivered in spades. Consider the inimitable imitated.

The record leans ever so slightly to their nastier Ashes Of The Wake styling than the blues of Resolution, providing Blythe the platform to go off about the societal ills he often targets.

Consistency truly does seem to be the goal with Lamb Of God, with the cover art looking like a repurposed part of the VII: Sturm Und Drang packaging and Josh Wilbur turning in his now de rigeur production job. The band’s approach is well established at this stage of their career and there are no surprises–bluesy heavy grooves merged with intense thrash speed and clinical Swedish precision overlaid with vocalist Randy Blythe’s caustic screech.

The record leans ever so slightly to their nastier Ashes Of The Wake styling than the blues of Resolution, providing Blythe the platform to go off about the societal ills he often targets. Routes is the most intriguing song, lyrically detailing his experience at Standing Rock as part of the No DAPL protests, and including guest vocals from Testament vocalist Chuck Billy, who is of Native American descent. Musically, the chorus evokes outlaw country with some thundering percussion backing up the outro breakdown.

Lamb Of God is a worthy addition to the band’s pummelling back catalogue.

STICK THIS NEXT TO: Pantera, Slayer, Gojira