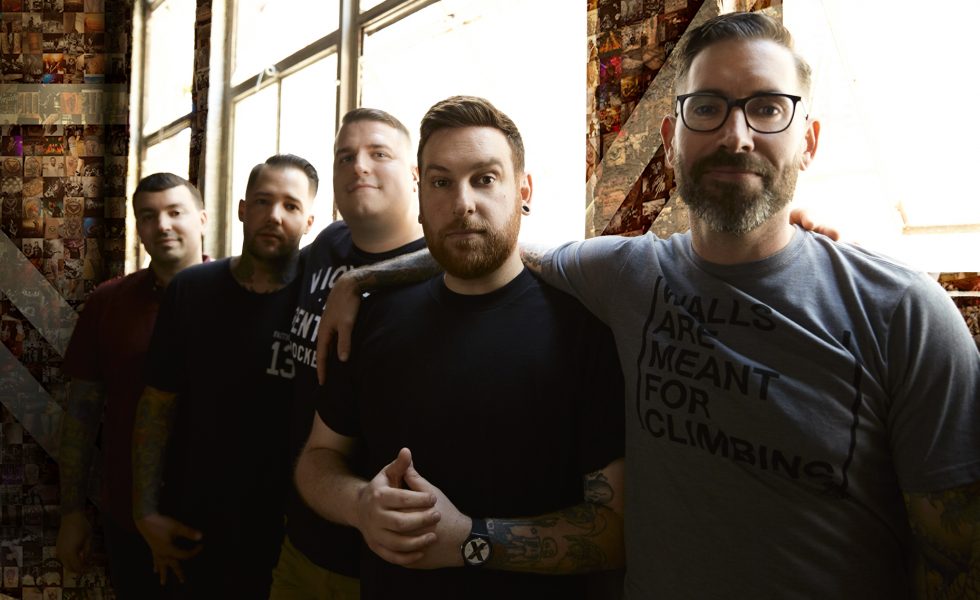 THE GHOST INSIDE // Coming Back Swinging

‘To hell and back’ is a phrase thrown around all too often in hard times–but for The Ghost Inside, given the turbulent past five years the band has endured, that phrase seems fitting.

MORE: PARKWAY DRIVE: Triumph Of The Underdogs // KICK OUT THE JAMS with Stepson REVIEWS: AVERSIONS CROWN: Hell Will Come For Us All // BOSTON MANOR: Glue // EBONIVORY: The Long Dream I // PALAYE ROYALE: The Bastards // JUSTICE FOR THE DAMNED: Pain Is Power // THE GHOST INSIDE: The Ghost Inside

Despite a horrific bus crash in 2015 that left drummer Andrew Tkaczyk without the lower portion of his right leg–the band have still come back with a crushing new self-titled record.

“Man, we are so excited that it’s almost out. We kind of can’t believe it.” said Tkaczyk about The Ghost Inside. “Every single track has something new and something to offer, and memorable parts and great risks and a huge message in the vocals. I just think it’s the best thing we’ve ever done.”

A new The Ghost Inside record is something that didn’t always look like a certainty. On November 19, 2015–a day the band now call their ‘re-birthday’–outside El Paso, Texas, the band were involved in a horrific bus crash that killed both vehicles’ drivers and left most of the band with life changing injuries. Despite having one of the more serious injuries, which resulted in months of physical therapy at the Mary Free Bed Rehabilitation Hospital in Michigan, Tkaczyk is a beam of positivity–happy to be drumming again and releasing new music with his band.

“We’re just happy to get new music out and we hope that people can just put it on repeat for as long as they can.” said Tkaczyk.

Fans who have been waiting for a follow-up to 2014’s Dear Youth will no doubt be glad that they did return. The Ghost Inside is an excellent return to form for the band; packing in an incredible amount of emotion and intensity into every track.

… if you have a drive and passion for something, and you don’t want to lose it, that you can work hard enough and get it back.
[ Andrew Tkaczyk ]

“Personally, I think [The Ghost Inside] is, leaps and bounds, our best record we’ve ever put out. I think the other guys would agree. I just think that it all came together so organically and the process of making it was so fun and natural, and it just got sort of translated into how it turned out.” said Tkaczyk.

Speaking about the band’s self-titled approach on the new album, Tkaczyk said “… it’s the first Ghost Inside record we’ve ever done where it’s been a full on five band member collaborative effort.”

Releasing new music is one thing, but touring is another. While playing live shows has become a tough prospect for any band in a post COVID-19 world, for The Ghost Inside, coming back to the stage after their recovery wasn’t always a sure thing.

“Early on, we all agreed that no matter what, whether we ever played a comeback show again or not, the plan was always to do another record.” said Tkaczyk.

Of course, the boys did end up doing that comeback show–on July 14, 2019 the band played an emotional show in Los Angeles, California to a sold-out crowd of over 8,000 people. To say the show was a big deal for Tkaczyk, who played with a specialised prosthetic leg, is an understatement.

“Getting back on stage for that first comeback show in Los Angeles solidified the fact that, you know, I did it and I overcame this monumental task and it’s definitely possible. I proved it to myself and everyone else that, if you have a drive and passion for something, and you don’t want to lose it, that you can work hard enough and get it back.” said Tkaczyk.

It was a triumphant show for Tkaczyk and the band, but one that wouldn’t have been possible without the support of the passionate heavy music community behind them.

“I honestly think we owe it all to the community, and to our fans and friends and family. That’s what kept us going. We felt like with the amount of support we had when everything happened, and to this day, the people that still support us. Over the years, we had a lot of people saying, like: ‘we’ll wait 10 years for you to play again, we’ll still be there.’ That hit us really hard. And we wanted to make sure we somehow could give back to the community.” said Tkaczyk.

That’s something that we really learned the hard way, to not take things for granted. And I think there’s several themes on the record that touch on that.
[ Andrew Tkaczyk ]

Hopefully, we don’t have to wait 10 years to see The Ghost Inside play again down under. While any of the band’s immediate international tour plans have been halted due to COVID-19 restrictions, the band are always keen to grace our shores again.

Though there might be a few things about Australia Tkaczyk isn’t quite used to yet.

“Yeah, we were eating at this restaurant [Queensland’s The White House of Waterford] and the size of the bats that we just saw, like, casually flying around, you know, everyone there was just like ‘oh, it’s normal’, but for me, I’m like ‘Uh, holy shit!’ (laughs). We don’t have bats that big here in the States, so it was just crazy to see.” said Tkaczyk.

As well as marking the band’s much anticipated return, The Ghost Inside–being the group’s fifth album to date–also marks a sort of transition for the band; from being a young band in the scene trying to find their footing to one of the most established names in modern metalcore.

“I’ve never really thought about it like that. But I mean yeah, I guess we are kind of the old guys now (laughs). But yeah, it’s definitely cool man. Like there’s so many sick new bands out and you know, we’re fans and friends with a lot of them and if they truly are inspired by us and look up to us, that’s awesome. To know that we maybe played a role in making them want to make their own music. I mean, that’s the coolest feeling ever.” said Tkaczyk.

I just really hope everyone loves the record and, take away from it what you will. You can interpret the songs and apply it any way you want, apply it to situations in your life and it can be an outlet for you to focus in a dark time.
[ Andrew Tkaczyk ]

“We’re all big fans of Wage War. I think that band just has killer writing and awesome riffs. And I’m a big fan of Kublai Khan, and I just think that what they’re doing is super cool and their vibe is so hard and so raw. That’s what I love about heavy music. Bands like Knocked Loose, and Code Orange, who isn’t exactly a newer band. I guess none of these bands are newer. They’ve been around for a while now, but I guess maybe I’m considering them newer since I’ve been out of the game for so long (laughs).” Tkaczyk continues.

This latest record is certainly a personal one for the band, and one that should mean a lot to fans. It’s an album that is only strengthened by the hardships that are behind it, and the lessons that Tkaczyk and his band mates have learnt over the last 5 years.

“I just hope that, when you listen to the album, it can inspire you to not sweat the small things in life and be grateful for every day you have. That you can wake up and, you know, you got to tell your friends and family and loved ones that you love them. That’s something that we really learned the hard way, to not take things for granted. And I think there’s several themes on the record that touch on that.” said Tkaczyk.

To sum up so much pain and trauma as Tkaczyk and The Ghost Inside have experienced is no easy task; but The Ghost Inside definitely does the band justice. They’ve been to hell and back and are still coming back swinging: which is nothing short of inspirational.

“I just really hope everyone loves the record and, take away from it what you will. You can interpret the songs and apply it any way you want, apply it to situations in your life and it can be an outlet for you to focus in a dark time. That’s the power of music, and we stand behind that and we love that we’re able to provide that. So yeah, we just hope that everyone loves it.” said Tkaczyk.