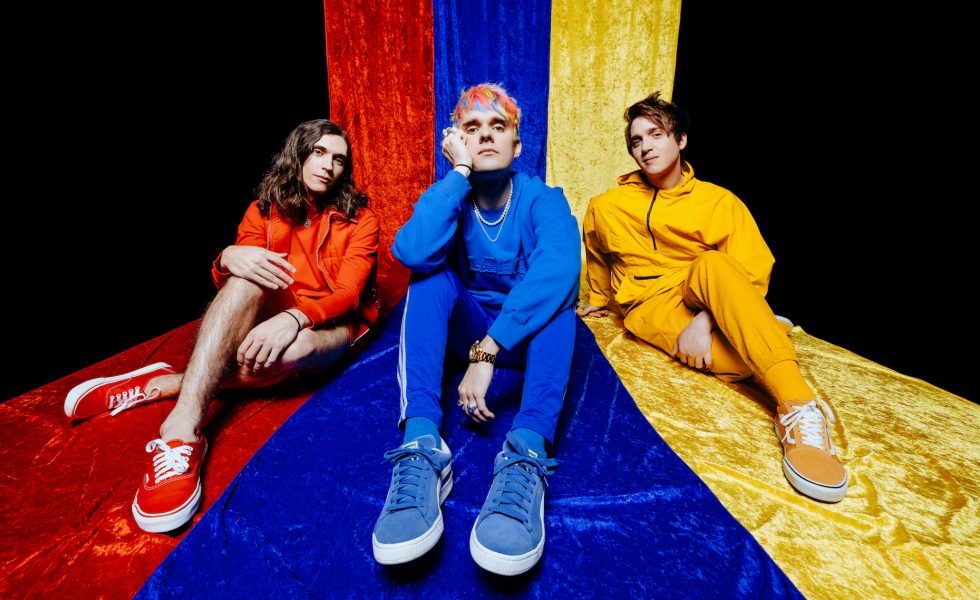 WATERPARKS // The Best Of Parx

When you call your record Greatest Hits, you have high standards to meet.

Thankfully for Waterparks, they were able to rise to the challenge. The genre-bending trio is confident that LP4 is their strongest work to date, and after a couple of spins, we can’t say they’re wrong.We caught up with frontman Awsten Knight to chat about how it all came together.

Hysteria: Hi Awsten! Where are we catching you from today?

Awsten: I’m in my place in sunny Los Angeles. I played tennis today, did some interviews and got food with Otto (Wood, drummer).

We’ve heard in some of your recent interviews you’ve been into tennis. How’d that happen?

I kind of wanted to golf at first and be all pinkys-out fancy. Our business manager is super into it, so I texted him, saying I wanted to give it a go. He gave me a call saying, we have to get you lessons and some clothes, and you’re going to have to do this a few times a week. Then he was like, golf is the only thing that brings out the darkness in me; it’s really hard. I was just like dude holy shit, never mind! I just wanted to drive the cart. Tennis seemed like the next best thing, still fancy but lower maintenance.

Yes, something about golf carts seems like so much fun!

They seem amazing. That’s what drew me in. But then, because of COVID, you can’t rent golf clubs, and they go for like a grand unless you’re getting really shitty ones. I posted on my close friend’s story that I was doing tennis, and a ton of music people hit me back about playing. I’ve got like a whole rotating thing now. I think everyone just wants to go outside.

Tell us about the album title. It feels super tongue in cheek.

There are a few layers to it. I knew it was supposed to be the title before the Cluster EP. I wanted to make a greatest hits from a bunch of eras that people never got. A lot of our eras are marked with a hair colour change, and I wanted this to be a multi-coloured thing. On the album cover, we’re all in yellow clothes with a blue sky behind us. We ended up doing the editing, but I told the photographer at the time that I wanted all the shadows to be scarlet. When you’re working with primary colours, you have to be careful. It’s super easy to look clowny. You really have to work on the tints and shades.

And also, this is the one that makes people that don’t like us on the internet mad, but they kind of are our greatest hits. I love them.

Did you feel any pressure going into this album, considering how well Fandom did on the Billboard alternative charts?

No, and I’ll tell you why. It’s not in an asshole way, I swear! When I’m demoing, I’m not thinking that a track is for an album because if I do, it’ll be too much pressure, and things will be shit. I make a lot of things, and eventually, I say we have so many songs here, we could make an album. If you go into something saying this has to go here and accomplish this, you won’t do it.

This is the one that makes people that don’t like us on the internet mad, but they kind of are our greatest hits. I love them.
[ Awsten Knight ]

Tell us about when the album came together. Was it during lockdown?

Yeah, the majority of it came together in lockdown. The only ones that were done before were Just Kidding, The Secret Life of Me and Crying Over It All. Even those had additions during the year though. This album was able to get done by me recording a lot of it in my living room. This is our first album where I have a co-producer credit.

What usually happens is I’ll demo something and bring it to Zakk Cervini, who produced Fandom. We’ll look at each stem and try to beat them, beat the guitars, beat the vocals or whatever. Then we’ll compare them and decide which one is better. This time around, a lot of demo stuff made its way in. I had more time, and I’ve been getting better at it. I’ve been doing it since 2014.

In the past, you’ve spoken about being selective with your music and not putting things out unless you think they’re better than your last. How many tracks were you sitting on before you cut it down to the 17?

I don’t have the exact number, but I think it was around 108. I can’t say that stuff will never be released because I’ve pulled from old material before. With Never Bloom Again, we had a partial version done in 2015, and that didn’t come out until Fandom did in 2019. There was just so much this time that nothing old made it. Who knows though. If we start touring heavily and want to put out some stuff, we have good enough tracks to go forward with.

You were releasing a whole stack of the singles for Waterpark Wednesdays. That must’ve been such a great way to connect with the fans.

It’s good. I’m just so restless in terms of waiting for stuff though. Tracks Like Snowglobe and Numb happened back in March of 2020, so I just wanted to get shit out. It’s not like it’s a ten-track album either. When it comes out, people will still have a whole album worth of tracks to listen to. I also like the idea of giving songs their moment.

Tell us about your recent livestream, The Anti Tour.

It was good! It was odd not having people there and still trying to feel good about it, but the nice part of it was doing production we usually wouldn’t be able to. We couldn’t bring a full-on, otherworldly looking forest on the road with us, y’know? We just recorded the album release show, and I will say that it beats the Anti one. It’s crazy. It looks like heaven.

It feels like that’s going to take fans to a whole other universe.

That’s the thing. I didn’t want to livestreams, but this shit is lasting so long, and we have to do some type of shows. I thought if we had to do this, it can’t be something they can see anywhere else. They can go on YouTube and just search up us playing in some venue, but we wanted to make it a whole experience. You have to beat everything that people have easy access to. We wanted to use this time to make it the biggest and coolest thing. And really, it’s an album release show for something called Greatest Hits. It has to be crazy.