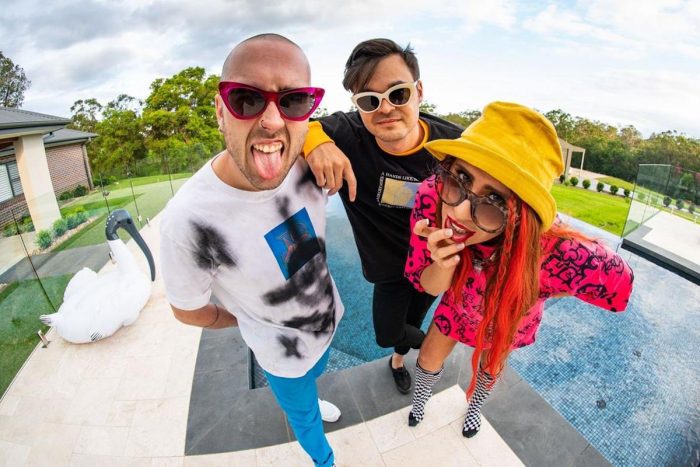 Bad decisions really do make good stories. And in RedHook’s case, they also make for some pretty tasty bits of tuneage.

Case in point: their debut EP. Self-described by frontwoman Emmy Mack as a Horcrux, Bad Decisions offers a glimpse into a side of RedHook not seen before. With so much to dig into, we got Mack on the line for a chat.

Hysteria: How long has the EP been in the works?

Emmy: We’re always writing, but because our touring schedule was so vigorous, we could logistically only do one track at a time. That was the one silver lining of the pandemic and our touring plans getting the wrecking ball. We were able to get into the studio and focus on a larger body of work.

A lot of the songs had been kicking around for a while. I know our fans were stoked that Your Heroes Are Bullshit was on the EP because we’ve been playing it live since the band started. Other tracks are different. We wouldn’t have written I Don’t Keep Up if it wasn’t for the pandemic. It came together once Download and another big tour got cancelled. In a way, Bad Decisions has been in the works since we started and then in another, since COVID started.

The album art is such a standout. Is there a link between that and the EP’s opener, I Don’t Keep Up?

Yeah, the weird apple lyric definitely inspired the album artwork. I was toying with the idea of calling the EP Bad Apple, but Bad Decisions sums up the themes pretty well. The image of an apple with a bite out of it is symbolic too. It goes all the way back to the Garden of Eden. You could call that the original bad decision, taking a bite out of an apple and dooming humanity to a life of sin.

A lot of our music is very angry and aggressive, and I love that, but capturing that vulnerability is so important when it comes to mental health.
[ Emmy Mack ]

These tracks are so raw and personal. Was that scary for you?

As a songwriter, it’s something I’m still learning to do. These songs are the most honest I’ve ever been. I’ve never experienced so much fear and excitement at the same time. There is so much of my soul laid bare in these tracks. It’s ugly, naked and everything. There’s no sugarcoating it.

Breaking out of a negative mind frame can be so challenging. Did these songs help you get through it?

When I wrote a lot of the lyrics to songs like Alien and Bad Decisions, I was in the thick of those feelings. Then when it got time to record, I was in a different headspace. In a sense, that made things easier. But, writing helped me process it, analyse it, and learn from it when I was going through it.

I had someone else ask if it was hard to perform those songs because they’re tied to negative emotions, but it’s the opposite. It’s kind of like a scar. It’s evidence you’ve gone through something, survived and learnt from it.

Alien stuck out so much to us. It feels like we’ve never heard RedHook that pared back.

In terms of our music, I need to capture the whole range of emotions that come with being a twenty-something-year-old woman going through this shit. A lot of our music is very angry and aggressive, and I love that, but capturing that vulnerability is so important when it comes to mental health. It was scary, but Alien is my favourite song off the EP and potentially my favourite RedHook song to date. It means so much to me. It’s my soul. I still get kind of emotional when I listen to it.

Stevie and I go way back. We used to live together in Redfern. He was actually around before Craig (Wilkinson, guitarist) was. He’s kind of the reason the band still exists. Getting the band to even happen in the first place was such a slog. I had the masters for Minute on Fire and Paralysed sitting in my Dropbox for two years before we officially released them. I almost gave up; I was going through so much and struggling to find the right members. Without getting too deep into it, I let a very negative person convince me I would never succeed and should just give up. Stevie gave me that pep-talk, saying, ‘No bitch you can do this. You got this!’ (laughs).

He’s like the Mr Miyagi of the whole thing. I love working with him. He gets what we do, and he has this way of taking our songs to the next level. It would be weird to work with any other producer. He just feels like part of the band.

What’s in store for your upcoming tour?

I’m so excited! We’re playing all the songs off the EP and a bunch of the old singles. There’ll be lots of cool surprises as well, a few guests and some unconventional instruments. We’re going to boogie, have walls of deaths, mosh, there might even be pillow fights if we can pull it off (laughs).

I’m sure your fans are hoping a sax solo comes through!

(Laughs) I can confirm that one. Craig has the sax in the rehearsal studio right now! We’re going to go all out for our hometown show. It won’t just be one. It’ll be a whole thing.

Catch RedHook at the following dates