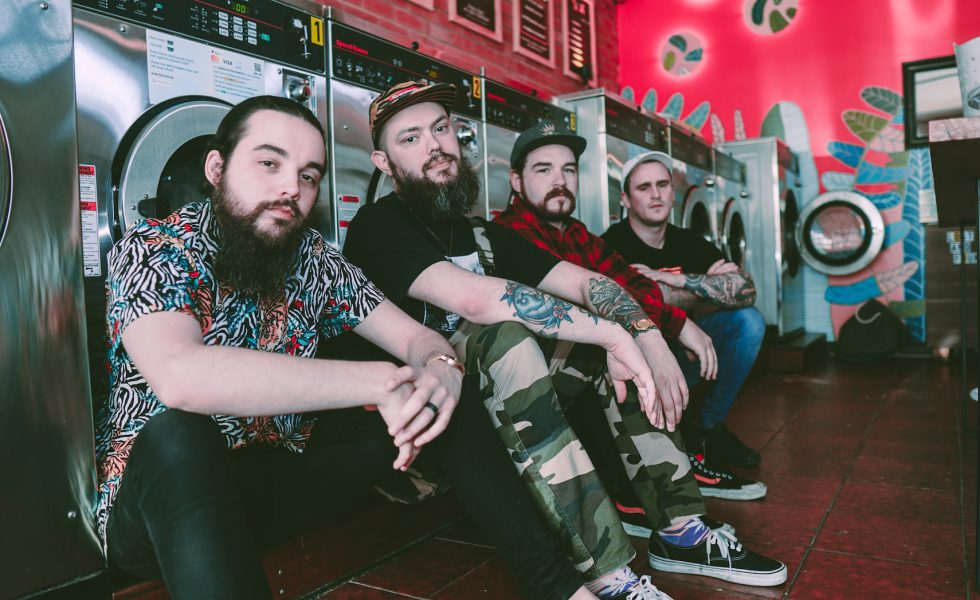 SOUNDS OF THE UNDERGROUND: SOME HEARD TROUBLE // The Age Of The Scorpion

Some Heard Trouble is here to shake up hardcore with their debut EP, Scorpion. Originally recorded back in November 2019, it’s now set to officially drop on the 9th of October and we are hyped!  Ahead of its release, we caught up with guitarist Jarrad Ferrier to chat all about it.

MORE: KICK OUT THE JAMS with IN HEARTS WAKE // SUPERDOSE GANGWAY: The Emo Revival REVIEWS: ALPHA WOLF: a quiet place to die // MARILYN MANSON: We Are Chaos // NOFX/FRANK TURNER: West Coast Vs. Wessex // IN HEARTS WAKE: Kaliyuga // PRIVATE FUNCTION: Whose Line Is It Anyway? // AGNES MANNERS: Fantasia Famish // MOVEMENTS: No Good Left To Give // SOME HEARD TROUBLE: Scorpion

Jarrad: A couple of the guys were actually in another band and I was living overseas for about two years.  They’d started the project and then when I got back to Australia I joined and we put out two new songs, Blood Eyes and Sweet Tooth. We recorded them with Scottie Simpson from Alpha Wolf, that was cool. We moved onto the new EP from there.

Tell us about the creation of the Scorpion EP.

I’ve been doing a lot of the writing. This time around I was just writing what came naturally to me, rather than focusing on anything in particular. I think that’s why this EP has a few more sounds to it.

Before recording, I was going through a few things with family members being quite sick and passing away. When we got around to actually recording, it was quite difficult. Our track Permanence was especially hard.

It was the first time I’d written something that personal and it’s still a bit surreal to hear. Being able to share that experience with people and get such a positive response back has been very nice. So was being able to share Permanence with my family, who’d experienced the death of my father as well. It gave them something to have in his memory.

The track Scorpion was mainly inspired by my experiences and things I’ve seen in my own life. I tried to make the EP a bit more personal and natural, tying it back to what was not only affecting me but the whole band.

Tell us about the video for Permanence.

It was something that’d been bouncing around in my head for a while. We recorded the EP back in November last year, I’ve been working on the idea since then. I spoke to a number of people to try and find the right person to be the dancer and then with COVID hitting it became a lot more difficult. I originally had a friend in the UK that was going to do it but that couldn’t happen. We’ve done a bit of work with Amy Mac from The Beautiful Monument, and she suggested a friend for the part. She helped bring the video to life.

This time around I was just writing what came naturally to me, rather than focusing on anything in particular. I think that’s why this EP has a few more sounds to it.

Who would you say are some of the bands biggest influences?

In this scene, we’re influenced by the likes of Hellions and Polaris. We were able to play a show with a band from the UK called Heights a few years back, and we do take influence from them as well. Outside of the scene, we’re influenced by Tyler, the Creator and a lot of rap. I try to bring a bit of electronic into our sound too, which you can hear in Permanence. It’ll be more prominent in a few of the new tracks I’m working on.

How are those new tracks going?

It’s quite early on, but since I’m home so much at the moment I’m just trying to write as much as I can.  It’s a really new experience, not being able to be with others to write.  I’m constantly writing, just to get all these ideas in my head out. We should have some more stuff on top of this EP soon, which is exciting.

You worked with Scottie Simpson [Alpha Wolf] on some of your last singles, how’d that go?

It was really good, that was the first time we’d recorded in quite a while. Scottie’s great, we gelled really well and we were on the same page. Blood Eyes and Sweet Tooth are on Spotify now if anyone wants to check them out!

What can we expect to see from the band after Scorpion drops?

Our sound will remain quite similar to what you’ll see on the Scorpion EP, I want to try and explore a few of the newer ideas and sounds that we did in that. I also want to push our writing even further.