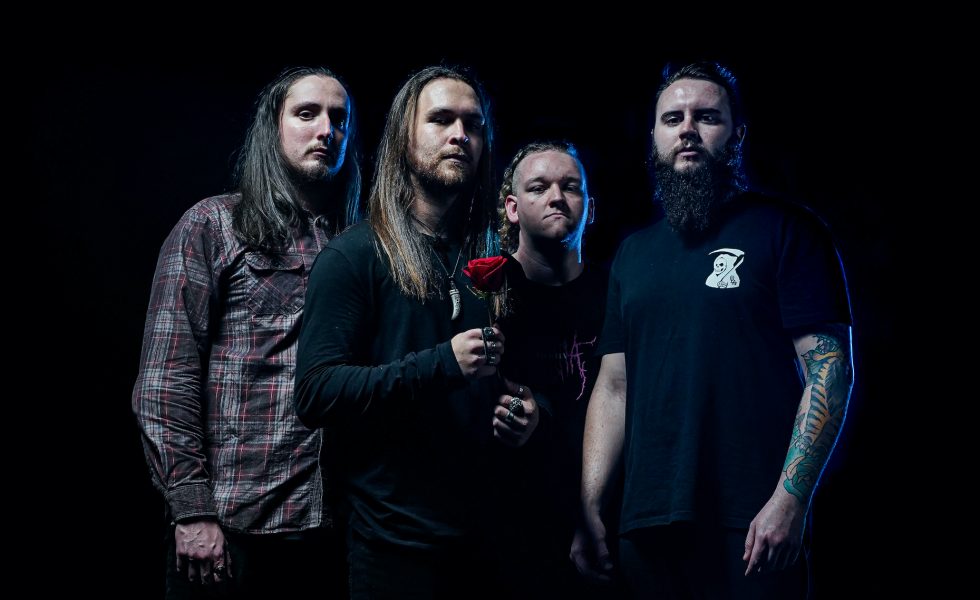 Brisbane metalcore act Revoid have had a busy year.

After releasing their latest EP Reform & Regret way back in January, like everyone, things slowed down a bit in the wake of the pandemic. However, being locked inside just fuelled the fire for Revoid; and after a line-up change and an attitude adjustment, they’ve come back stronger than ever with their dark new track Cut Me Down.

According to vocalist Dale Dudeson, while lockdown has put the band back into a writing mindset, Cut Me Down is an idea whose roots stem from a time pre-COVID-19.

“Well, with Cut Me Down, it’s actually a project we’ve been, I guess I even have been, sitting on for maybe two years or so, and it’s something that we never really took seriously. I guess as a band, I think we’re in more of a transitional phase between what we were before and becoming Revoid,” says Dudeson.

A dark track for the Brisbane band, Cut Me Down deals with some heavy themes around mental health and suicide, ultimately imparting listeners with a message that no matter how hard it gets, it’s always still worth holding on. While the song itself may have been an idea kicking around in Dudeson’s head for a long time, it’s a message that only became more relevant when COVID came around.

“I was in quite an isolated environment; I wasn’t doing so great mentally. So, I just thought, instead of trying to power through and sit and think on these thoughts for a little bit and, you know, ask myself the questions, like ‘How do I feel?, ‘How am I meant to make myself matter here?’ and ‘How am I meant to keep motivated?’, and, in thinking that, I just sort of gained the perspective of how many other people before me have crossed this bridge and how many other people seek support where there isn’t any–or don’t feel like there is any–just because of how we feel. At the end of the day, we end up being consumed by our own feelings.

“I just wanted to sort of grasp the perspective and convey that, with this song particularly, that even if you don’t really feel it, if you even just ask, to let someone know, you might be surprised by how much they care and by the way they care, because not everyone cares the same. Not everyone can show they care well enough to really connect with you, unless they know that you need it.”

Leading up to this, before the real completion of it all, I would even struggle to get the concept of the video explained to people without getting choked up a little bit, because it was just so real to me and it was something that I believed in.
[ Dale Dudeson ]

Thoughts of isolation have a very relevant connection to the current state of the word, but despite that universality, at its heart Cut Me Down is a song that’s born from Dudeson’s own personal connection to its message–a connection that he believes has strengthened the track significantly.

“Leading up to this, before the real completion of it all, I would even struggle to get the concept of the video explained to people without getting choked up a little bit, because it was just so real to me and it was something that I believed in. Something that I had been through, at more than one time in my life.

“It’s just something that I really believed in, and I felt like if I was going to say anything, I really had to say it right. So, I really took a lot of time to do these lyrics, and while they may seem simple, it’s more to do with relatability than anything. Cause you can write poetry, but not everyone’s going to really blend into that, I guess.”

While this latest stand-alone single comes less than a year after the band’s previous release, in the process of Revoid ‘becoming Revoid’, Dudeson believes that the band have certainly improved upon their sound in a big way.

“I think quality wise, it’s just a better song. Everything’s tighter, more pulled together. We went down to Sydney to record this with Mark Williamson, he’s from Keyword Audio and also plays in the band Inertia, and so we, he reached out to us to record this, and we were like, ‘Oh, that’s a really good sign’, because he actually has good reputation and really good results…

“I put a lot of meaning into everything, like Reform & Regret has its own set of, you know, has its own set of values and meanings and stuff, but this is a hundred percent more relevant. Especially with the year that we’ve just gone through, it just hits home in a whole different way. More universally relatable, I guess.”

While it’s nothing new to anyone to say that COVID-19 has had immeasurable effects on the world in 2020, there are still the odd silver linings in an otherwise miserable state of the world. For Revoid, these darker feelings that come with a track like Cut Me Down are only more relevant in a post-COVID world.

“I guess COVID came at such an inopportune time, but it’s so relevant to the basis of this song, because nothing drew out peoples, I guess it drew out the darkness in people, and that really became applicable with Cut Me Down. It’ll hit at such a perfectly horrible time.

“So, I guess we’re in, as far as reliability goes, we can only pay more attention to what’s going on around us, you know, but we’re always going to pack meaning into everything we do. It may not be as soft or as heavy, depending on your opinion of where Cut Me Down is, but it’s always going to be meaningful.

“It’s always going to be as relevant as possible. We’re aiming to pack as much of a punch as we can live and really get out there with it, because we’ve seen what works. We’re seeing what we can do, and now we know that we’re on the right track, we can just hit it really hard.”

Looking to the future after such a turbulent time for the band, it certainly seems like Dudeson and his bandmates have a solid idea of where 2021 will take them–with Cut Me Down being the stepping stone to a brighter future for Revoid.

“So, [Cut Me Down] is the standalone that we’re going to bridge the gap between our next work, which will be coming in 2021. We’re looking at doing an EP and, obviously the details are vague so I can’t say too much more than that (laughs), but that’s the plan…

“We’re using this as a standalone single, and then we’re going to start getting everything together. Well, we’ve already started. We’re going to get recording at the start of 2021 and hope that we don’t get hit with quarantine round two.”

Not every song on Revoid’s next release will have the same dark message as Cut Me Dow does, but one thing’s for sure: you can guarantee that the band are always going to write from the heart.

“Honestly, I think it’s way too easy to just write songs and just pack them with whatever sort of garbage you want these days. We’d never knock any bands for their success or anything, but there’s, I feel like that if you’re not saying much while you have the opportunity, you have a grand platform to do something with your voice, with your songs, with the meaning that you provide, the least you could do is say something that matters, and something that means something to people.

For fans and listeners that hear Cut Me Down and can relate to the troubling message in its lyrics, Dudeson has some parting words of encouragement.

“For those dealing with things like this, personally, I just, I really want to say to them to just be here.

“But for those of us left in a position of support, or who are just left to deal with it after unfortunate circumstances, be brave more than anything, because that’s kind of it at the end of the day.”

Revoid’s latest single Cut Me Down is out now.