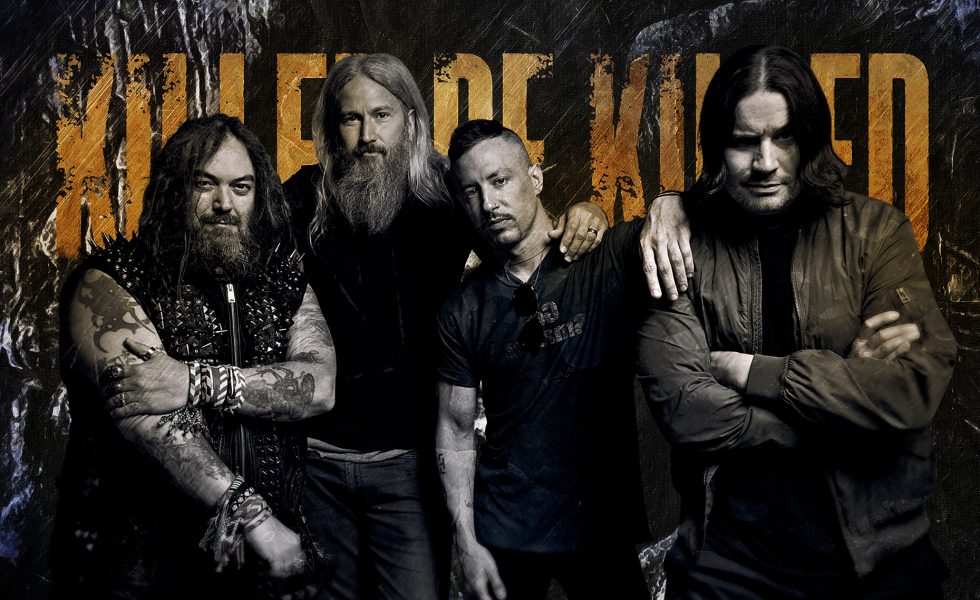 With the only change that of Ben Koller stepping into the breech left by Dave Elitch, Reluctant Hero picks up the Killer Be Killed story from precisely where it left off six years ago.

The album opens on pretty ferocious territory, a flurry of riffs, furious grooves and three distinctive voices bouncing off one another—Troy Sanders’ gruff croon, Max Cavalera’s ragged roar/growl and Greg Puciato providing every shade of contrast from melodic hooks to towering screams. It’s familiar ground, a carry over from the self-titled debut, a reassurance that album was no fluke. As it unfolds further, Reluctant Hero builds on the solid foundations of that opening account and reveals how strongly the chemistry has developed amongst this combination of souls.

Unlike the first album where the vocal duties seemed contrived in order to give everyone an equal share, on Reluctant Hero it is generally the contrasting but complementary tones of Puciato and Sanders playing off each other over the bulk of the tracks. Cavalera’s contributions have mostly been dialled back to brief grabs, stepping up only occasionally to take the lead on rabid thrasher Animus or to deepen the three way vocal attack with some bellowing back-ups.

Dark, heavy, furious, coherent and compelling, Reluctant Hero stamps Killer Be Killed as a true force to be reckoned with.

On the enormous From a Crowded Wound, the band fully stretches out its progressive leanings over a balefully chugging riff, Puciato investing every aspect of his vocal dexterity into the album’s longest and most diverse track. The Great Purge has an almost ethereal air, until it suddenly swings from introspection to explosive raging thrash; Dead Limbs comes careering out of Animus with a certifiable ferocity and Filthy Vagabond burns with a searing hardcore energy. With the title track, the band shifts the mood to a sprawling, brooding atmosphere that echoes some of the more sombre moments of Sanders’ regular gig but remains comfortably distant from it.

That is the real charm of Killer Be Killed: that it sounds like the main bands for its three principal protagonists, and yet vastly different from them at the same time. Every song draws from a remarkable creative wellspring that provides some surprise at each twist and turn, a carefully constructed guitar melody, some dextrous move from Koller, vocal lines emerging out of one another or just a killer groove and a riff locking together. Dark, heavy, furious, coherent and compelling, Reluctant Hero stamps Killer Be Killed as a true force to be reckoned with.

STICK THIS NEXT TO: Mastodon, Lamb of God, Machine Head