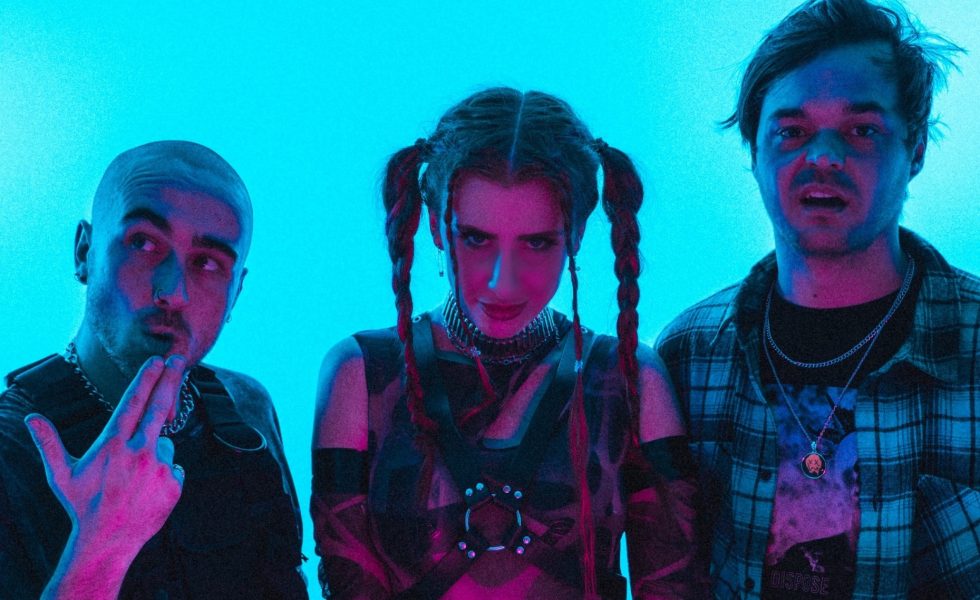 REDHOOK // Not Good Enough For Truth In Emo Cliche

RedHook’s latest single Sentimental Surgery is here for anyone who’s ending lockdown with a self-cut side fringe or mountains of eyeliner on.

It’s been self-described by frontwoman Emmy Mack as a happy/sad anthem and by us as a celebration of the sounds that made us all a bunch of raging emos. Before its official release, we caught up with Mack to chat.

Emmy: It started as a lyric kicking around in my head – “I’m not okay, I’m a fucking emo cliche.” I was sitting down with our producer Stevie Knight over Skype. We were trying to write a song because what else are you going to do during lockdown? It ended up becoming my own happy/sad anthem about this whole lockdown [laughs]. I just found it so hard to write about anything else. It’s not news to anyone, but this whole pandemic has been so fucking rough. For my friends, especially those who are artists or in the industry, there’s been all this uncertainty and blow after blow. And this lockdown was harder than the first for everyone because we thought we were heading in the right direction. Since everyone was really sad and emo, I wanted to write a song that helped cheer them up.

We love how Sentimental Surgery celebrates the sounds that made us all a bunch of raging emos.

Yes! Can you pinpoint a band or music moment that helped you decide the raging emo life was the life for you?

It’s going to be such a cliché, but My Chemical Romance’s The Black Parade. That’s one of my favourite albums of all time. Just in terms of dealing with the angsty feelings I was going through when I was a sad ginger kid trying to find my place in the world (laughs). But also musically, as an artist, I still listen to it now and think it’s perfect. It encapsulates so much raw emotion, theatricality, and different kinds of songwriting- it’s a work of art! I never went through the hectic MySpace fringe phase, but in terms of emo becoming part of my DNA, it was definitely that album.

Take it from this journo who went through the fringe phase and more. You’re lucky you skipped it!

You know what, I remember this one time in high school. I’ve always had really bright red hair, but I thought it’d be a good idea to put one of those eight wash black rinses through it. It just looked burnt, so bad! After that, I came to terms with the fact that I could be emo on the inside but not so much on the outside [both laugh].

We were going to save this one till the end, but with that story in mind, what would you tell young Emmy looking back now. Aside from encouraging her not to use shitty hair dye.

Aw man. I’d say stress less and that it’ll all be okay. Feeling like the world’s ending because someone made up a rumour about you in high school will not impact your life that much.

[The song] ended up becoming my own happy/sad anthem about this whole lockdown [laughs]. I just found it so hard to write about anything else.
[Emmy Mack]

We can’t wait to check out the music video when it’s ready. It must’ve been such a special experience to connect with your fans in that way. How’d you come up with the idea?

We were cockblocked really hard because of lockdown. I had this grand idea for the music video. This will sound stupid now, but do you know that 90s TV ad for the board game Operation?

Yeah, it’s really cringe. So I wanted to do something like that, but then mix it with the goriness of Bring Me The Horizon’s It Never Ends. Because of lockdown, there was no way that was going to happen, and originally we thought we just wouldn’t do a music video. But then, we thought since everyone was bored as fuck in lockdown, we should have some fun and do a big emo dress-up party. We wanted people to have fun with it and have something to smile about even though we’ve all been feeling sad. Y’know a bit of serotonin and a blast from the past!

I was scared that people would say it was dumb, but we’ve been so overwhelmed with everyone’s involvement and submissions. Lockdown particularly hit me this last week, but watching all the videos has really put a smile on my face. We’re hoping the music video does the same when people do get the chance to watch it.

We’re stoked to have you on Halloween Hysteria. Who are you most excited to see there?

The lineup for Halloween Hysteria is awesome. There are so many bands I’m jumping out of my skin to see. I’m going to be biased and say FANGZ and The Last Martyr. They’re such good mates, and I always feel so much pride and joy seeing them perform. I’m really excited about that.

To go back to our earlier point, how has RedHook been staying sane during lockdown?

Listening to music, writing and trying not to sit there and twiddle my thumbs has helped. We’ve just been doing what we can to feel like life’s still going forward and not at a stop sign. Oh, and I’ve started to learn to rollerskate! I impulsively bought some skates off Depop and decided to teach myself how to do it. I’ve been really unco, like when Bambi first started walking. But I’ve gotten slightly better in the last few weeks. It just looks cool! As a kid, I used to have big, ugly rollerblades, and I thought skates would be easier, but they’re way harder.

When you get better at it, that’s going to be your next music video.

It’ll be a training montage, and I’ll fight Chuck Norris in rollerskates [both laugh].

Is this track a sign of more to come?

Since we’ve been writing so much throughout the lockdown period, there’s heaps of new music in the pipeline. I know this song is poppier than our other stuff, but there’s also plenty of heavy stuff we’ve been working on too. We don’t really like to leave it too long between releases, so we’ll keep that up.