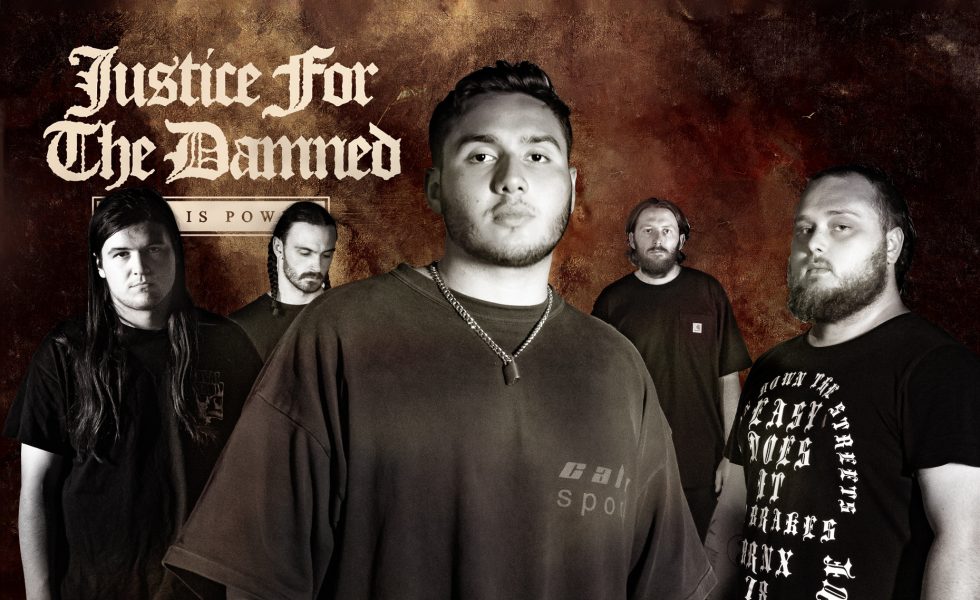 JUSTICE FOR THE DAMNED // Emerging From The Fire

Justice for the Damned are back, potentially at the time when they’re needed the most.

MORE: THE GHOST INSIDE: Coming Back Swinging // KICK OUT THE JAMS with Stepson REVIEWS: AVERSIONS CROWN: Hell Will Come For Us All // BOSTON MANOR: Glue // EBONIVORY: The Long Dream I // PALAYE ROYALE: The Bastards // JUSTICE FOR THE DAMNED: Pain Is Power // THE GHOST INSIDE: The Ghost Inside // LAMB OF GOD: Lamb Of God

The pure aggression of their music is a welcome soundtrack to the bleak world we’re currently living in. Their debut record, Dragged Through The Dirt was a grime filled, hateful record that immediately made an impact on how aggressive Australian hardcore/deathcore saw itself. Now, they’re about to release their follow-up record Pain is Power.

Interestingly enough, singer Bobak Raffiee isn’t the sole lyricist behind the band’s driving lyrics. Tackling heavy issues like family abandonment and domestic abuse are difficult topics to dredge up alone, and the singer says everything that originally came to his mind ended up on the cutting room floor. Regaling the tale of how they destroyed to rebuild, we’re taken to Europe in the midst of a tour with the record’s producer Will Putney’s touring band, Fit For An Autopsy. “The interesting thing about Justice that I really enjoy is that everyone contributes to the writing of the lyrics,” says Raffiee. “With this record specifically, it’s not a long story but there’s some detail.

We like to think of the new record as Dragged Through The Dirt but on steroids.
[ Bobak Raffiee ]

So we went on tour with Fit For An Autopsy in Europe, then from Europe to America. So when we left home [Sydney, Aus] in May, we didn’t come back until the end of June. Stuff happened in our personal lives, a lot of stuff changed, I had something really bad happen to me. So we wrote lyrics and songs and we were in Europe going over the pre-production. All of us were off in our own corners sometimes and then I thought ‘I don’t want to sing about any of this.’ I decided ‘I don’t want to sing about this person, this situation or use any of these words’. This is a permanent thing and the person I wrote it about, I thought ‘they don’t deserve to be written about’. What am I doing? I’m not in high school. I had a massive revelation. I didn’t want to tell the boys because I didn’t want to stress them out. But then we got into the studio and had 16 pre-production tracks and about five or six done with lyrics. Will and Marshy turned around on the first day and said ‘Is it cool if we delete all the lyrics and all the phrasing and start from scratch?’ I thought that was best case scenario and it made me so excited.”

The tales weaved in short bursts throughout the record–The House You Built is Burning explodes in just over two minutes–are tight with metaphors and direct pit calls. Rather than shifting into their own circles as they had done before, Raffiee describes the collaborative storytelling each member of the band partook in to craft Pain Is Power. “Kieran [Molloy, guitarist] actually wrote most of the lyrics and he’s very talented in that aspect,” describes Raffiee of the overall writing. However, to begin, he says: “Putney wanted us to send him an email with 20 topics and he didn’t want any lyrics or content. Just give him the topic and an explanation. Some of us turned them into little fictional stories, like one of the topics was karma. That became Guidance From the Pain. One of the stories became about driving, having a car accident and the bodies scraping across the floor with blood everywhere and that became A Crimson Painting. That song changed into driving whilst on your phone and it highlights the impact of phones in everyday life. Will came into the room the next day, he got the top 11 pre-productions, top 11 topics and then said ‘this topic matches this song’, ‘this pre-production sounds angry like this topic’, ‘this song has a sad bit in the middle so let’s make it Sinking Into The Floor’. He didn’t say it, but it was essentially like ‘fuck off and go write the lyrics’. So then within seven days we wrote all the lyrics.”

Despite record pushbacks, Raffiee is confident in the album they’ve created and its ability to impress discerning listeners. “The only thing we did consciously–or that I did as much as I could–is that I tried to go 0-100 as much as possible,” says the singer. “We like to think of the new record as Dragged Through The Dirt but on steroids. Recording at Graphic Nature [Audio, Will Putney’s studio] and going to Belleville [New Jersey] we were concerned how it sounded sonically. Everyone was on the same page about how it should sound. We wanted it to sound real, but we also wanted it to sound really, really angry. I think we did that and I’m very proud of the record. The first record came out and some people call it ‘artsy’. I appreciate that and I agree with it to a certain point. I think the first record we were young and it was what was done at the time. It was the first stepping stone and I love that record. But this time we went into the studio saying, “Dragged Through The Dirt is fucking mad so let’s make something even better, let’s just go crazy.”