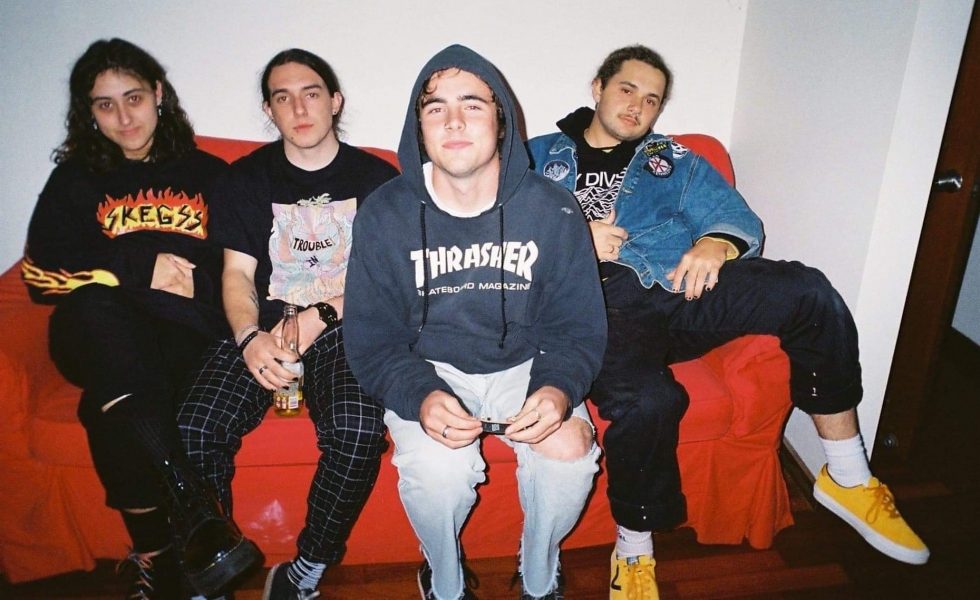 In May, they dropped their debut EP, Sick of Trying. And as if sensing we all needed some grungy goodness to get us through the rest of this cursed year, they’ve shared their latest bop, Baltimore. Before its release, we caught up with vocalists/guitarists Connor Massey and Connor Dean and dug into its inspiration, creation and more.

Connor Massey (AKA Massey): Three of the four of us went to school together. We were in the same music class, jamming out on our lunches and recesses. Our drummer Darcey Greco and Connor Dean (AKA Deasey, vocals/guitar) actually started the band. They were doing two-piece covers. I got jealous, so I begged them to let me in. After that, we got organised with our first gig.

For a while, we’d been asking one of Deasey’s best friends, Taj Sinclair, to be our bassist, but he had a bad case of stage fright and didn’t want to get up there with us. But, he did say he’d come along and watch. So anyway, we played the show, and he had heaps to drink. He came to us slaughtered afterwards saying, forget what I said before, that was awesome, and I want to join. We’ve been a four-piece ever since, and it’s been bloody incredible.

The power of a bevvy, hey?

Let’s dig into your new single, Baltimore. What’s the story behind it?

Deasey: Obviously, the song’s quite influenced by Violent Soho. I think most people would be able to see that. I really like the way they write. I was writing about how the world is falling apart because of technology and things like that, and I wanted to talk about how people can be so snobby and really live on social media.

Massey: There was also a story from one of our shows. We had a group of people being really snobby in the front row. They were dicks to us before we even got on. They were kicking everyone out so they could be at the front and centre and were generally acting like they were better than everyone else. It really pissed us off. And then, when we got up on the stage, they realised we were the headliners, and they completely changed face. They acted like they were our best mates whilst still getting in the way of everyone in the front row. I like the fact that Deasey used Baltimore as a way to say fuck off and fuck you to people that do that. It’s annoying.

Deasey: In the song’s chorus, I say ‘slowish Soho dancing, everyone just seems so fucking fake.’ That was about their bopping in the crowd. Their headbanging made me write that line.

I bet those people are looking back now thinking we shouldn’t have been such dicks.

Both: We fucking hope so (laughs).

I was writing about how the world is falling apart because of technology and things like that, and I wanted to talk about how people can be so snobby and really live on social media.[Deasey]

You guys hit the nail on the head there; we got massive Soho vibes from the track. So what is it about them that inspires you?

Deasey: They opened my eyes to what I could create. The sound they have is so beautiful, Australian and raw. They’re amazing. My first instinct is to write songs as they do.

Massey: I was never into the stuff we do now. But one of the first bands Deasey got me into was Violent Soho. I was blown away because they were doing something so familiar yet still different. Things that were simple but so hooky, and things that made you feel uneasy, but also at home. That made me think this is real art and the kind of thing I want to create. Deasey wanted to create stuff like that too, so I was excited to work on something like that with my best mate.

Aside from Soho, who else would say inspires the band?

Deasey: I think Nirvana inspires every single band in the world.

Both: Dear Seattle, they’re a big one for us.

Massey: Especially since they’re so close to home. They feel like a goal we might be able to reach. Their music is so Australian, and it makes you proud to be Australian.  But it’s also so heart wrenching and really makes you feel something. There are so many bands we could list off. It’s hard to nail it down. It’s good that Deasey and I listen to different, but similar, bands. So when we come together, we can create something different again.

It’s great to see you’ve listed some Oz acts. So tell us, who are some of your favourite Aussie bands?

Deasey:  My favourite Australian band at the moment is Sly Withers.

Massey: Yes! I was going to say them first too. Also, Tiny Little Houses, Pandamic, Bugs, FANGZ, Lucid Hoops and Soda Simulator are sick. Who was that band you were showing me before Deasey?

Massey: There’s so much of the Oz scene that doesn’t get attention. But these bands are awesome, and they’re in our corner of the world. I couldn’t be happier about that.

Give us a view inside the recording studio. How’d this one come together?

Massey: We worked with our producer and engineer, Jack Nigro, at The Grove Studios. We worked with him on our last EP and our single, You.F.O. He’s worked with heaps of Triple J artists like Pacific Avenue and has done stuff for Middle Kids. He also assisted on the last Soho record and engineered the upcoming Dune Rats one. He’s done a lot of big stuff, so we were stoked to have him on board. He gave us a lot of pointers on cutting things out and gave us new ideas. When we went in, we gave him a demo that I’d produced in my home studio. He listened to it a few times and took notes about tones and the cinematic world he imagined the track would live in. He picked out the pedals he wanted to use, knew exactly what amps would go for our rhythm guitars, and had new mic setups to make Baltimore feel anthemic. It worked out really well in the end.

We know it’s tough to know now, but what do next steps look like for the band?

Massey: We’ve got to wait for COVID to go away. We did have some massive tour plans on the table, but they’ve all been put on hold. We’ll keep on working on new content until we can finally get out and tour. We want to keep people entertained too, through making YouTube videos and stuff like that.

Deasey: I want everyone to know I’m a tech deck king. I can shred.

Massey: Yeah, he can! He made his own skate park; it was awesome! I personally want everyone to know that I’m really proud of this song. I think it’s one of Deasey’s best to date, and I love the bloke. I think everyone else will love it too.

Deasey: You’re a babe. I love you.

We’re emotional! That’s such a sweet note to end things on.

Massey: Deasey with his love of tech decks and me with my love of him (all laugh).

That contrast got us too. It’s okay Deasey, you got there in the end!