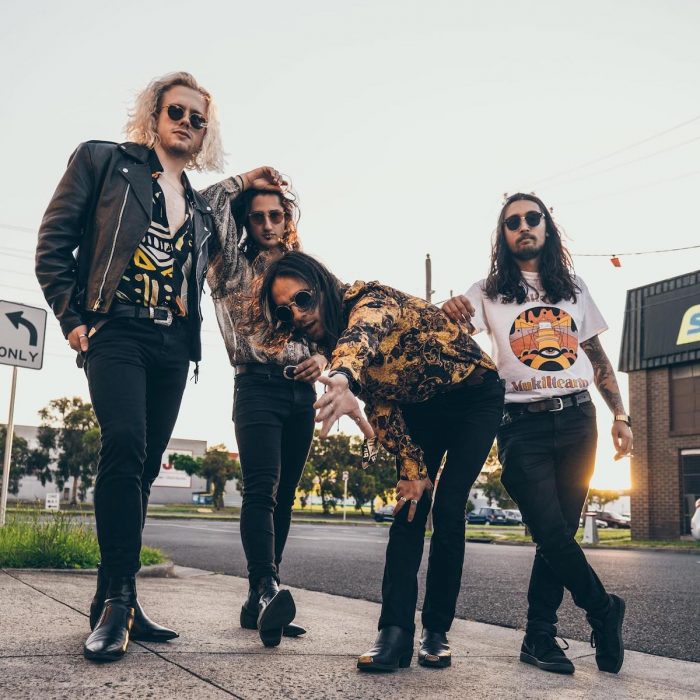 The Crookeds walked a different road to get to their debut EP.

After seven years, lineup changes and, of course, a global pandemic, they’ve shared Dead Eye –  and despite all their challenges, it’s proven to be an absolute triumph. We caught up with drummer Oscar Linkson to dig into how it all came together and more.

Oscar: Our singer/guitarist, Sonny James, started The Crookeds in 2014. They had a different lineup and different songs and came to an end in 2017 or so. He was looking to kick things off again, so he started looking around in mid-2018. He paired up with his good friend, Matt McLean, our bassist. He then put an ad up on Facebook looking for a drummer, and that was me. We had a jam, and it was like love at first sight. We clicked really well. The three of us worked together for a while, and then we found our guitarist, Aaron Franks. Sonny met him at Sky Music and thought he looked cool, so he asked him to join the band. We actually had to convince him. The timing wasn’t quite right as he’d just joined another band, and he didn’t think he could commit. After a month or so, he changed his mind, and it all came together from there.

Congratulations on the release of Dead Eye! With delays and everything pandemic related stopping you, you must be stoked to finally have it out in the world.

It’s a massive sense of relief! It dawned on me the day before the release. I was talking about it to my workmates. I went home early that day, put the EP on and just listened to it cover to cover. I got quite emotional, honestly. It’s been a two-year journey to get here. The EP has gone through a few iterations, primarily fuelled by lockdowns and some other mishaps. We all feel the same though. It just feels fantastic to get it out there. And at the end of the day, we’re all so proud of it, regardless of how it goes. It’s a beautiful piece of art in our eyes.

We see so many people just going through the motions of life. They go to school, work or whatever and are numb to everything going on…People are really losing touch with their sense of identity.
[Oscar Linkson]

Where’d you find your lyrical inspiration?

Sonny writes all the lyrics, so I’m really just paraphrasing what I hear from him. A lot of it comes out of frustration. We see so many people just going through the motions of life. They go to school, work or whatever and are numb to everything going on. That’s fuelled by media and socials and having access to all this information. People are really losing touch with their sense of identity. And with everything that was happening in Melbourne at the time, specifically the lockdowns, it came together. Frustration was definitely the biggest thing though. We were frustrated with people losing touch with their humanity.

In our review, we called the EP a wild ride to riff city. But tell us, what were you guys jamming that inspired Dead Eye sonically?

The four of us are actually massive metalheads, and that always comes through as inspiration. Our sound has grown a lot, we’ve gotten heavier, and I think that’s just us coming to terms with what we love. That said, Sonny’s vocals change things completely. With them, we’re not metal or hard rock. It’s hard to pinpoint one exact inspiration, but I think Sonny and Aaron draw the most from metal. They love bands like Pantera. That’s where that real dirty guitar tone and riffing comes from.

Honestly, it was pretty cruisy. It all fell into place. We recorded it over the last couple of years. It’s pretty hard to take my mind back to the end of 2019 when we did the first recording, but I know the one we did earlier this year was beautiful. We were together, just bouncing ideas off each other and watching things come to life.

You lot must be itching to get back on the road! Can you share any upcoming plans?

We’ve been working on an October tour, but it’s a bit up in the air given the state of lockdowns and everything. That’s why we haven’t announced it yet. It’s looking like we’ll be pushing it back to the end of this year or early next year. We’re itching to get back on the road though, and share this release with the fans.