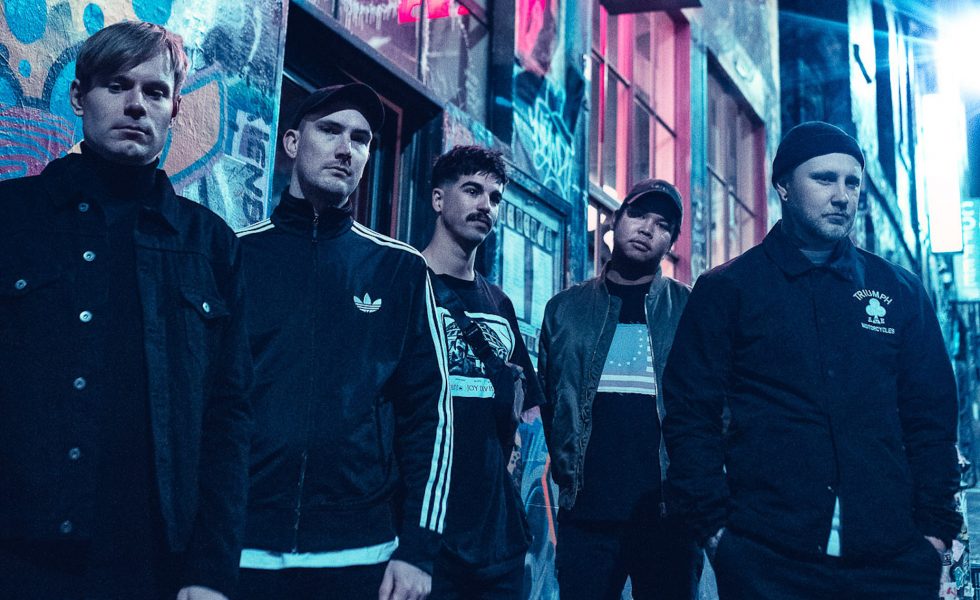 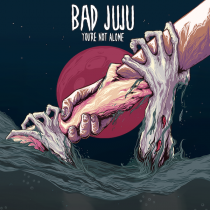 The follow up to their promising 2018 debut Hidden Desire, You’re Not Alone, sees Bad Juju expand their sonic palette, exploring new musical textures and melodic approaches, without sacrificing any of the immediacy or emotional impact of earlier efforts. The result is a record filled with the type of widescreen anthemic rock songs that beg to be screamed at the top of your lungs.

Opener Disappoint is an excellent example of what Bad Juju do extraordinarily well. A big, raging, emotive punk rock song with an unashamedly emo heart, Disappoint is a banger that has found a home on triple j, as a special place in Bad Juju fans’ hearts. Combining some superb layered guitar work from Abe Miller and Armarin Saengsri, pounding rhythms from drummer Drue Herring and some thick bottom end from bass player Matt John, Bad Juju conjures a massive sound here, creating the perfect instrumental backdrop for vocalist Russell Holland to deliver a standout and heartfelt performance. A song about the seemingly endless process of grief, Holland lays his innermost thoughts bare here and in doing so seems to unlock a new level to his performance. There’s something raw and real that’s been captured and when it explodes towards the end of the song, it almost feels like he’s undergone a cleansing of sorts.

Overall You’re Not Alone is a real step-up from an already stellar Melbourne band that aren’t afraid to showcase both their musicality and their humanity.

Sirens covers somewhat similar territory, musically, however there’s enough differentiation in song structure via a nice atmospheric bridge and some tasty lead work, to keep the dynamic fresh. Holland is again front and centre, delivering lyrics with unmistakable passion and honesty, while some powerful stickwork brings the track to a thunderous close that showcases both the skill of the musicians and of producer Callan Orr, who really has the knack for bringing out huge sounds.

Picture Us brings some 90’s emo influence to the forefront, with quite brilliant results. Calling to mind contemporaries like Trophy Eyes, Basement and Teenage Wrist, Picture Us combines the sonic vibes of early Bad Juju jam Moving On with the more developed songcraft of the tracks on You’re Not Alone. One of those rare songs that makes the open wound of heartbreak seem strangely appealing. The combination of Holland’s desperate vocals, some gorgeous Jimmy Eat World meets American Football quiet passages and another spacious chorus makes this the type of song that grows on repeat listens. If you turn your headphones up, you can hear Orr’s production really shine here too, with what sounds like synth strings adding further dexterity to the composition.

Recent single Dawn serves as the centrepiece to You’re Not Alone and it’s an astute choice. A song about loneliness, addiction and mental health issues, and the intersecting lines between them, Dawn arrives with us at a perfectly imperfect time for its message; as we find ourselves in midst of a pandemic and a lockdown that has so many facing these issues, Holland’s open yearning for understanding, both from the self and from others is a sentiment shared by too many right now. The self-doubt, the anxiety, the disappointment, the over analysing, the loneliness, it’s all so relevant. As such it hits home hard, but not in a destructive way, almost in a comforting one. If this song can help inspire open conversations about these issues among the Bad Juju fanbase, then that would be a wonderful thing. Musically, the song has some stellar melodic guitar work, punchy rhythms, hooks for days and a really nice step-down into a call and response vocal bridge that just begs to be played live. The build up to the song’s crescendo towards the end is a triumph.

A record full of anthems that wear their hearts on their sleeves and dare you to the same. You’re Not Alone because you have this record to help you through. Bad Juju understands.

Say It brings the themes of mental illness and self-healing to the forefront in explosive fashion. Sitting at the heavier, grungier end of the Bad Juju musical spectrum, Say It is an absolute stomper. The quiet/loud dynamics of 90’s grunge and alt-punk feature prominently here and honestly, it fits Bad Juju like a glove. The way the chilled instrumental passages of the verses provide room for Holland to embrace a more intimate vocal style, really works, setting the table for a knockout chorus. When you write a chorus like the one on Say It you should absolutely build the song around it, and credit to Bad Juju for realising that. Every single element of this song serves as the perfect journey back into that monster hook.

Every member equips themselves masterfully on this one, but shout out to whichever of Armin or Abe nailed that lead heading into the final chorus, that’s a sick riff that helps guide a banging song to its finale. People are going to have a blast losing it to this one at shows.

Total earworm and most recent single Let’s Talk brings pop dynamics to the fore, with an addictive chorus and a sunny soundscape. With so many hooks it is easy on first listen to miss the lyrical message, but when it connects that this song is about exiting a toxic relationship, well, let’s just say that the chorus feels even funner than it did beforehand. Compositionally, this song is a perfectly executed modern punk rock song. Snarly but clean vocals? Check. Melodic guitar leads? Check. Pre-chorus atmospherics? Check. Verses that build quickly and effectively into the earworm chorus? Check. A big old half-time chorus sing-a-long coming out of a spacious bridge, repeated at full speed to take us through to an explosive end? Check! All of this is there, infused with the signature Bad Juju sound, and the result has been stuck in my head for a few days now.

Closer Watch Me Fall is the most musically adventurous track on You’re Not Alone fusing elements of every song on the record into one perfect ending. Starting out similarly to the first two tracks, it moves along nicely before a lead break a minute and a half in, serves as a killer transition piece into a sprawling final two minutes that packs in some lovely guitar layers, some harmonised vocals, a brief blast of post-hardcore that calls to mind some of the earlier works associated with some of these musicians and a lovely instrumental fade out built around the vocal melody. A fittingly dense and emotional closer to a very accomplished EP. I would

Overall You’re Not Alone is a real step-up from an already stellar Melbourne band that aren’t afraid to showcase both their musicality and their humanity. A record full of anthems that wear their hearts on their sleeves and dare you to the same. You’re Not Alone because you have this record to help you through. Bad Juju understands.

END_OF_DOCUMENT_TOKEN_TO_BE_REPLACED

Melbourne’s Stuck Out has announced their release of their second EP Lie Through Your Teeth, …

Like the elite Roman legionaries from whom they take their name, Evocatus unleash a heavy …