BABIRUSA // Beware Of The Digital Age 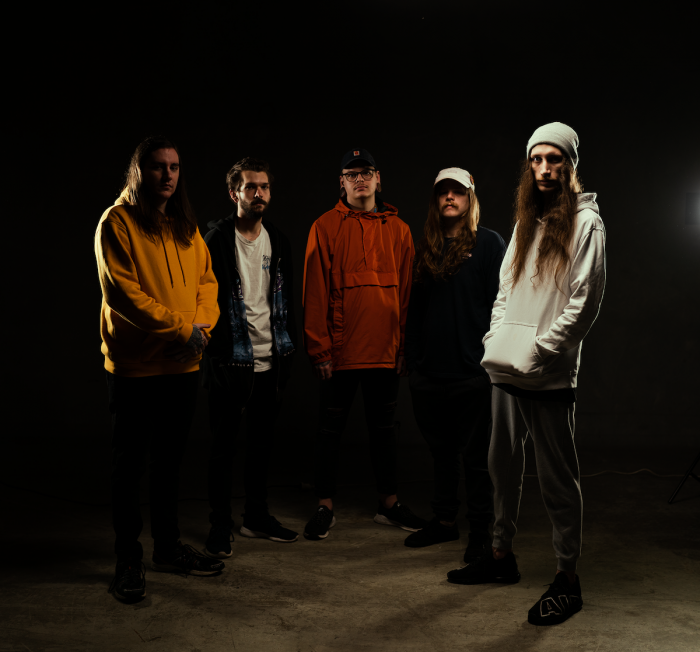 Dystopian times call for dystopian music. If their savage debut Humanoid is anything to go off, Brisbane deathcore group Babirusa are intimate with dystopia.

Humanoid is a concept album that bears a clear cautionary tale for the digital age we now live in, co-vocalist Kyle Williams says.

“The concept behind Humanoid is pretty much all centralised around the character referred to as ‘343’, and he’s pushed and pulled between reality and a cybernetic world where he’s used as a battery to fuel the entire cybernetic world. When he comes back to his normal life, he’s very depressed, and doesn’t really know whether he wants to remain as a battery and live in this cybernetic world or return back and stay in the reality where he’s really depressed, seeing the overuse of technology taking over humanity; and how they are slowly falling at the hands of themselves to the overuse of technology in the world.” Kyle says.

Humanoid is an impressively fleshed-out concept for a local deathcore debut. For Williams and his co-vocalist Rheese Peters, a concept record was always the plan.

“Both Rheese and I are really inspired by pretty much all concept albums. We’ve always loved reading lyrics and getting into the whole world that the artist has created around their art, the whole artist’s vision of their craft. We’ve always liked that,” says Kyle.

Compared to writing a standard deathcore record, Williams believes if anything, having a concept at an album’s core streamlines the entire process.

“We personally find it easier,” Kyle says. “‘Cause we see it kind of as a movie in our head, and we can write almost what we’re seeing and expand on that a lot easier than writing when we don’t really have anything in mind. It’s a lot easier when we have an orientation to go off.

“Rheese and I started writing the concepts and the lyrics together and it pretty much flowed from there. It just brainstormed, it floated all off Desolation System, the first song, because that was the single. And then when we started writing the lyrics for the other songs, we continued that concept and expanded on that.”

While concept albums have remained a staple in the heavy music scene Kyle believes they’re somewhat of a lost art in pop circles–with single-driven, chart toppers taking the spotlight instead.

“I still feel that in our genre of music, there are usually underlying concepts behind it,” Kyle says. “At least the stuff that I listen to and the stuff that I surround myself with. But, definitely in the mainstream, I feel that meaning has been lost in music. It’s more about production value and stuff like that now, and the image of the artist.”

I guess the roots of deathcore have always come from the whole, if we go back to the MySpace deathcore, was using audio samples and little clips from movies and stuff in their songs. It’s always just been there at face value. It’s just been about fast brutality
[ Kyle Williams]

So how exactly does a concept like that of 343’s use as a human battery in a cybernetic world come across to listeners within Humanoid? A lot of the album’s conceptualisation comes across through audio samples from works that inspired the album like The Ghost In The Shell, something that harks back to deathcore’s origins.

“I guess the roots of deathcore have always come from the whole, if we go back to the MySpace deathcore, was using audio samples and little clips from movies and stuff in their songs. It’s always just been there at face value. It’s just been about fast brutality,” Kyle says.

While deathcore remains a strong genre for this kind of storytelling, Williams and the band have layered other elements into their sound, taking influence from a variety of heavy bands, as Kyle says.

“It’s definitely deathcore and definitely heavy and has those aspects, but there’s still other elements that Tate (Senhenn, guitar) and Dean (White, guitar) have chucked in there from their influences, especially, listening to bands like Issues, Volumes and Dance Gavin Dance, The Word Alive and stuff like that.

“Rheese is definitely an old school deathcore type guy. He’s into As Blood Runs Black, All Shall Perish, you know, all that kind of first wave, I guess you would call it that. Cause I’m a bit younger than Rheese, I was into more like Suicide Silence and pretty much that kind of wave of stuff. But yeah, definitely influences us a lot.”

Perhaps one of the great ironies of Humanoid is its release in a time when we’re more reliant on technology than ever. Because of restrictions around social interaction during the preparation for Humanoid’s release, there have been several hurdles to jump for Kyle and the band to get the album ready for release.

“We expected to have the Catatonia music video out a lot earlier than it was, and we had a studio booked in and stuff,” he says. But as everywhere closed down, we weren’t able to do that. I had to do everyone’s parts, go to their houses, following restrictions, and just go to their house and film their part at the house of each member and then edit it all together myself. So that definitely pushed Catatonia back and the whole release.”

At the very least, the current state of the world has given both Kyle and Rheese some lyrical inspiration for the next Babirusa album.

“Yeah, it’s definitely fuelled a few lyric influences for me, seeing how the world’s gone, and this whole pandemic,” he says.

Looking forward to the future and what comes next for the band, Humanoid is only the start; with many a concept album to look forward to from Babirusa once Humanoid has done its rounds and they boys set foot back in the studio.

“I think we’ll always do concept albums. That’s just part of Rheese and I. I don’t know if we’re going to expand off Humanoid or not yet. Just writing the instrumental material for it first. Tate, Dean and Rangi (Barnes, drums) are always writing their instruments. They always have material under their belt and they just present it to Rheese and I when they’re happy with it and we can write out lyrics onto that. So, there’s always material to go. I guess we’ve just been focused more on this album so far. But we’ll be cracking into the next release very soon though.”