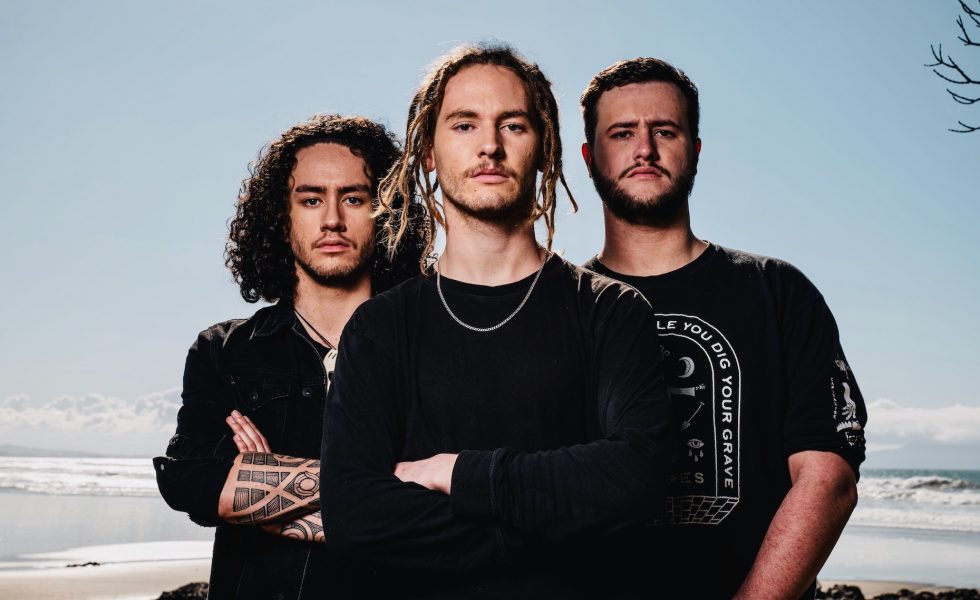 ALIEN WEAPONRY // Take On the World

Henry and Lewis de Jong from Alien Weaponry are up probably a little earlier than usual this morning. Today is the release day of their eagerly anticipated second album, Tangaroa, and they have a pretty heavy schedule ahead.

The pair cut a friendly, disarming picture, almost self-conscious, as they settle in on the couch just after 9am New Zealand time.

“For us it’s super exciting and we’re starting to get a few reactions from the fanbase now,” says the older and rather more talkative Henry de Jong. “It feels really good to finally have it out and to actually be here now. There was a lot of hurry-up-and-wait for the last few weeks.”

The release of Tangaroa might be the biggest thing for the band right at the moment, but even more massive things are close to the horizon. All things going well, the trio will be on tour in the US in October with one of their major influences.

“At the end of this month we’re meant to be flying out to America to tour with Gojira, which is massive,” says guitarist and vocalist Lewis. So right now we’re practising and getting ourselves all up to scratch.”

The awe the brothers have for the French heavyweights is hugely obvious as they talk. Henry even invokes one of the band’s song titles as he expresses his thoughts about them.

“They’re a hugely influential band for us, not only lyrically and thematically, and with the way they think, but musically those guys are some next level bullshit. We’ve seen them live a few times at festivals when we’ve been on the same bill, and they are really like from another world. They’re not even human. There’s some alien stuff going on there. Maybe that’s why they’ve taken us as support!”

The two bands certainly share similarities, especially in terms of lyrics and themes, as the drummer has pointed out. Alien Weaponry’s new album Tangaroa explores environmental degradation and issues relating directly to the Maori experience in modern New Zealand as well as stories from their own family ancestry. Despite half the lyrics being in Maori, the title track has a powerful message about polluting the oceans that should concern anyone.

“That’s really what the band is about, whether it’s messages about what’s happened in New Zealand in terms of colonisation,” Henry explains, “the treatment of Maori here which is something very personal, or something traditional or something that affects everyone, like the track Tangaroa. Which is, I guess, why we decided to name the album Tangaroa, because it comes across as the most encapsulating idea, the most relevant to everyone who’s going to listen to this album.”

I feel like on this album, us as people have had some experiences and stuff that have been a bit different to when we were writing the last album. Some of the last album was written when I was 13 years old. This album was more of a compressed snapshot of our minds, almost.
[ Lewis Raharuhi de Jong ]

With recent world events bringing the treatment of First Nations people around the world into focus, Alien Weaponry’s songs such as Ahi Kā and Titokowaru that deal with the themes of colonisation and dispossession are particularly timely. The brothers hope that with the popularity of their band expanding, the reach of their message will too.

“I think as our fanbase grows and they cotton on to us telling these stories,” Henry says, “it’s only going to grow. And to be part of something bigger, as well, is definitely something we want to do.”

Singing in their native Maori is a powerful tool in the Alien Weaponry arsenal. Combined with the use of traditional instrumentation, it’s a technique adding further depth and meaning to their already provocative songs.

“With the Maori stuff,” Henry begins, “we’ve had a lot of people say to us that they can get the whole vibe and message, it’s something that you just feel what the vocals are doing and you can understand where it’s coming from. I think it’s a pretty good mix, as far as that goes, and it’s not something we’re going to stop doing anytime soon.”

“I’ve seen one or two comments, I think, but for the most part people were supportive of the work we do, whether it’s in Maori or English,” Lewis continues. “A couple of slightly ignorant comments said, ‘How come you guys are singing in English now?’ Forgetting the fact that on the last album, half the tracks were in English. I think it’s just people who type before they think, but for the most part we’ve had nothing but positive reactions.”

As most of the songs were written over a tight time period, Tangaroa is a crystalisation of where the de Jong brothers are as they both reach early adulthood. There is a lot to be angry and frustrated about, Lewis says.

“I feel like on this album, us as people have had some experiences and stuff that have been a bit different to when we were writing the last album,” he explains. “Some of the last album was written when I was 13 years old. This album was more of a compressed snapshot of our minds, almost. Most of the songs were written and recorded in the space of about six months, and the other two, Ahi Kā and Blinded, we did two years before that. This album has definitely got some heavier subjects.”

They also draw heavily from Maori legend and their own family heritage. Maori history is a verbal one, passed through generations by word of mouth, and now Alien Weaponry is turning those ancient stories into metal songs they can share with the world.

“Īhenga and Hatupatu talk about people in our genealogy. Īhenga was one of the first people to come to New Zealand with the group of Maori we’re part of,” Henry says. “He traveled and named a lot of places in New Zealand, so that song is taking you on that journey where he is traveling through Aotearoa and finding all these places and naming them, and exploring. The other one, Hatupatu, is almost folklore at this point. Hatupatu is a character, again from our genealogy, from the early part of our history. He gets captured by this bird-witch in the forest, and it’s about his escape and what he does to ensure his survival.”

“A lot of Maori know that story,” Lewis concludes, “and I remember when I used to hear that story when I was a kid, it used to scare me. So it was awesome to be able to write the song and shoot a pretty sick music video and visually tell that story.”