UNDERGROUND INC // A Snapshot Of Obscurity 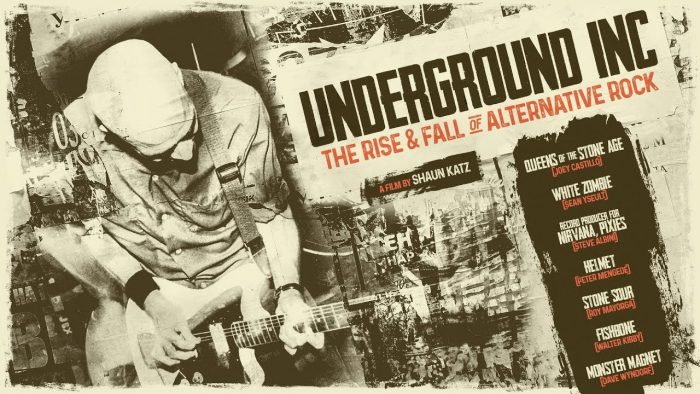 For anyone who ever considered themselves an authentic rock music devotee, the late 80’s and early 90’s was a period like no other for up-and-coming heavy/alternative bands participating in a subculture that became the apex of mainstream popular culture for a good part of a decade.

Record labels, commercial radio and television took notice of bands that deliberately went against the sanitised pop music dominating the media’s attention mainly thanks to the Seattle Grunge bands and youth globally being interested in guitar music that spoke to their anger, alienation and their despondency of governments and authority. Whilst this was a golden age for rock to once again thrive and reach the masses, it only lasted a few years as many of these bands faded away into obscurity and are now only remembered for their sonic experimentations and being stubbornly uncompromising.

All of this is the subject of the 2019 documentary–Underground Inc: The Rise & Fall of Alternative Rock directed and produced by Sydney based filmmaker Shaun Katz. This is a film made up entirely of talking heads many Grammy nominated musicians, producers as well as A&R’s and managers who were prominent in shaping the alternative rock sub culture of the 90’s, together they have plenty of stories to tell resulting in ecstasy and hardships.

The film opens with this defining statement–“In 1991, Nirvana signed to a major label. Their first release with Geffen Records sold 30 million copies … this is NOT that story” Musician and record producer Alex Newport is one of the many artists interviewed in this film and was the vocalist and guitarist of the now disbanded English noise/sludge metal trio outfit – Fudge Tunnel. Alex spoke to Hysteria about what it was like being in a participating band of this subculture of musicians that challenged the status quo “I think that at the time participating in this music scene, it didn’t seem like it would have any effect on mainstream music or society particularly. For us I think it was more about being able to play the kind of music we liked, and we didn’t really have huge aspirations beyond that, at least at first. At that time there wasn’t a name for this scene, it wasn’t popular at all—there wasn’t a movement for it, certainly not in the U.K, and I don’t think there was in the U.S either really. As the music started to become noticed and it developed into a “scene” in 91 and 92, labels and the general public became interested in it, and it became more popular and ultimately commercialised—which is a lot of what Underground Inc explores”

… the way labels such as Sub Pop, Secretly Canadian, Alcopop, Transgressive, and Dine Alone treat their artists, and how they structure their deals and contracts has been impressive to me and its reassuring that many of these labels don’t want to follow in the typical major label-style heavily biased and unfair type of dealings.
[ Alex Newport ]

Alex has gone on to become an in-demand producer/engineer and mixer lending his talents to many seminal bands such as The Mars Volta and Death Cab For Cutie amongst many others. He also accumulated credits for scoring films including Underground Inc which was a direct result of being an interviewee and offering his services to the director whilst having just completed another score for the sci-fi thriller film ‘Interpreters’ “Shaun and I discussed the general direction for music but he was pretty open. I felt like it generally had to be music that fit with the style of the movie—there wouldn’t be much call for orchestral pieces obviously so I tended to stick more with the aggressive rock. It was fascinating for me because I’ve moved away from that style of music for myself and certainly when it comes to composing, so it was quite interesting and fun to play some extremely loud guitar and drums for a while!”

Many of the heavy music genres that came later such a nu-metal, emo rock and pop punk were all influenced and had their beginnings in the 90’s. Band members, managers and producers of Fishbone, Clutch, Monster Magnet, Henry Rollins band and Helmet just to name a few are all featured throughout Underground Inc, they laid the foundation for music aimed at outsiders and for people who just didn’t want to fit into mainstream society. The film ultimately tells a story of a global solidarity of bands not just from the U.S but from other western countries such as England and Australia and how rebellion, arts and commerce is often a difficult balance to strike.

In my youth music was a critical part of one’s identity. People’s musical tastes were aligned with their politics, background and aspirations. Streaming makes music more available but without strong positive promotion (new releases or touring) it won’t hold people’s attention for very long.
[ Alex Newport ]

The politics of the time if also touched upon with the 90’s being a grim time politically as George H.W. Bush had begun the gulf war and England was feeling the long terms effects of Margaret Thatcher’s neo liberal economics. America’s underground hardcore and punk rock bands who often were the first to scream about injustices and hypocrisies toured internationally and brought bands such as Fudge Tunnel on their touring bills “I’m not sure if U.S politics was something we thought about a huge amount. We had more than enough of our fair share of problems in the U.K in the late 80’s. We certainly loved a lot of American bands around at that time, such as Fugazi, The Jesus Lizard, Girls Against Boys, Babes In Toyland, and were lucky to get good support slots with those bands when they came over to the U.K.”

Many of the interviewees discuss at length how record labels treat artists like cattle and how many of them at the time rode the wave of success the grunge bands had kicked off but after one hit song on the radio or album on the charts there follow up releases did not do nearly as well and as a consequence they would break up and have punch ups over financial losses. “We had some miserable dealings and I know a lot of other artists did too. Since that time, I’ve worked with countless of labels in my capacity as a produce and I’ve had a lot of positive experiences that offset some of the horror stories. For example, the way labels such as Sub Pop, Secretly Canadian, Alcopop, Transgressive, and Dine Alone treat their artists, and how they structure their deals and contracts has been impressive to me and its reassuring that many of these labels don’t want to follow in the typical major label-style heavily biased and unfair type of dealings. However, there are still some unscrupulous label and management companies out there that take advantage of artists – often as a throwback to the 90’s and corporate-style thinking, but sometimes unintentionally due to bad organisation”

For years I’ve been hearing talks about the grunge movement “coming back” but it would just be pointless … the social conditions don’t exist now that allowed it to exist back then. People don’t really want grunge music to come back do they? I don’t. I’d rather hear something new.
[ Alex Newport ]

The 90’s has been described by many fans and critics as the last counter culture movement in music and after that period there hasn’t been a real visible music scene quite the same. The internet may well have made music subcultures more fragmented and harder to discover yet all the musicians who made an appearance in this film can all be streamed a million times over and gain new fans that they may not have been able to reach in their heyday. This all of course is up for further debate and Underground Inc starts these conversations and highlights the importance of community and bands existing in an ecosystem as they all depend on each other to survive and thrive “I don’t know that any music “scene” has the power to get that big these days or to affect people’s lives the way the music cultures did from the 50s through the 90s. With the advent of streaming, mobile phones, video games music doesn’t have the same hold on people that it did back then. In my youth music was a critical part of one’s identity. People’s musical tastes were aligned with their politics, background and aspirations. Streaming makes music more available but without strong positive promotion (new releases or touring) it won’t hold people’s attention for very long. Still, with the advent of social media and music streaming we are discovering that Fudge Tunnel does still have a lot of fans out there, maybe a lot of them discovered the band through streaming? If so then I think it’s cool.”

Films like Underground Inc may inspire other documentaries that will explore music subcultures in the 21st century as we are now in the midst of a digital revolution that the 90’s could not have experienced or even imagine the possibilities of today’s world. Yet music is still as relevant as it was then and alternative forms of rock and heavy music still prevail in and amongst new genres and subcultures “Personally, I am still hearing a lot of good creative music coming out, but there is absolutely less of a community anywhere around music, and less focus from the listener. For years I’ve been hearing talks about the grunge movement “coming back” but it would just be pointless … the social conditions don’t exist now that allowed it to exist back then. People don’t really want grunge music to come back do they? I don’t. I’d rather hear something new.”

Underground Inc premiered at the 2019 Sydney Underground Film Festival and has since gone on to be played at various other prestigious international film festivals. It is now available to watch on iTunes and Vimeo on Demand as well as various other online platforms so if you’re in lockdown or just want to watch something that hasn’t been explored nearly well enough, do yourself a favour a watch this documentary and discover the real stories and gems of this ground breaking time in music culture.