TWISTED HORIZON // The Shape Of Rock To Come 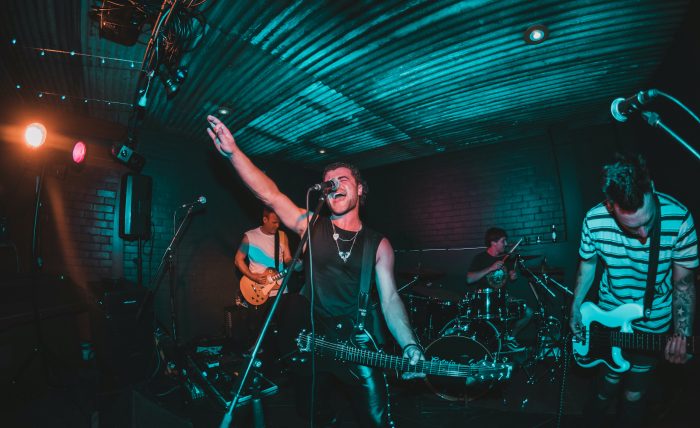 Albury’s Twisted Horizon are an act to watch this year. And you need not look further than their latest single, Guilty Pleasure, to see why.

It’s the latest taste of their debut record, Road to Revival—a work that promises to take us all back to the glory, and glam, days of rock and roll.

We caught up with frontman Jack McDonald for a chat about it.

Jack: I had the name Twisted Horizon in my head for a while. Initially, I planned for my previous band Catnip Kaiser to go by it; however, as time went on and that experience finished, I chose to go solo and do my own thing.

With a full album written and ready to be released, I went out under my own name for a while until a few of my mates suggested I use the Twisted Horizon name for my music. Since then, I have got an Albury all-star studded band from my hometown and have been rocking along ever since.

What’s the story behind your new single, Guilty Pleasure?

Guilty Pleasure was a song I sat on for a while and put a fair bit of time into writing. I accidentally came up with the intro riff one afternoon while waiting for my best mate, who ran a music store, to knock off. I would just pick out a guitar off the wall and start to play random stuff until I eventually came up with the riff, and it evolved from there, eventually developing into a real fun song.

I wanted it to be like a dirty, part glam-rock kind of song that dived into a bit of old-school Bon Jovi and Van Halen. Basically, I wanted a kickass chorus and a thrilling guitar solo. When writing the solo, I kept thinking, ‘hmmm, what would Eddie (Van Halen) do in this situation.’ In saying that, I wouldn’t even consider myself to be 1% of what the man was on a guitar. He was a freak of nature, and his influence is something that is always with me.

I wanted it to be like a dirty, part glam-rock kind of song that dived into a bit of old-school Bon Jovi and Van Halen.
[ Jack McDonald, Twisted Horizon ]

Who’d you work with to put it together, and what was that experience like?

For this song, I worked with my old faithful producer, Buttsy Clarke, from the band Trancestate. Buttsy is someone who I work with extremely well. He isn’t afraid to push me musically. The song was basically 99% written when I came into the studio, but his expertise on guitar gear helped make it one of my favourites I have ever recorded.

There are thousands of musicians I could put into this category; however, I think it is a dead heat between Sammy Hagar era Van Halen or Richie Sambora (Bon Jovi’s original guitarist).

Van Halen is one of my choices because, to me, Eddie Van Halen was a God of music and is the greatest guitarist I have ever seen. He reinvented the guitar in so many ways and basically crafted a new wave of rock music through all the crazy things he could make those six strings do. His guitar equipment alone has influenced music from Rock in the ’90s to a whole new era of metal music in the 2000s.

Richie Sambora is my other choice as he is my biggest musical hero. He was able to express so much through a guitar and can write hit after hit – a total Rockstar in my eyes.  In reality, he is probably the biggest influence on Twisted Horizon and the main reason why I started this project.

I am always spinning a heap of acts from all genres at any time. The Amity Affliction are on constant rotation. Parkway Drive‘s new song kicks backside too. My brothers in Midnight Alibi and Drastic Park are also bands that are doing really cool things right now!

You recently shared the stage with Reece Mastin. What was that like?

Reece is a really genuine person who has a huge love for rock music. I learned a lot from him by watching him play and hanging out with him afterwards.  He is just a super chill person, and his fan base was so supportive of Twisted Horizon, which was appreciated. It was a tremendous honour to share the stage with him.

What can we expect to see on your upcoming album, Road to Revival?

Road to Revival is a collection of songs written during the peak of the pandemic. It bounces from music style to music style. While writing the songs for this album, I didn’t want to restrict myself to a specific genre – even though, for some reason, people have started calling us lux rock from our live shows, whatever that is (laughs).

The songs blend well into one and tell a story of the confusion, heartbreak and emotions during the time of the CoronaVirus. The songs also go into me discovering who I am as a person, the different types of people you come across in life and the bigger picture of the world.

It will be a guitar-driven album with catchy choruses and relatable lyrics. I am excited for everyone to hear it. We will also be doing a tour to celebrate the album where we will be travelling to a lot of places none of us have been before!