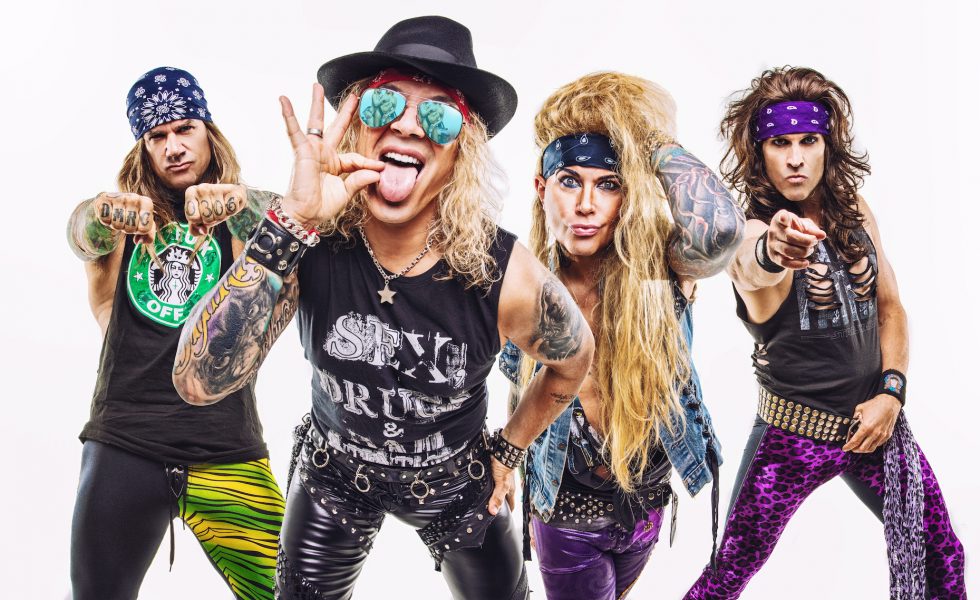 STEEL PANTHER // Bringing The Debauchery Down Under

If you haven’t got tickets to the heavy metal party of the year, what are you waiting for?! The long-awaited Steel Panther and Sevendust tour will hit our shores this October, with shows in Melbourne, Newcastle and Sydney, on top of a stacked mini-fest in Brisbane.

We caught up with vocalist Michael Starr to chat about what punters can expect and more.

Hysteria: We’re so excited to have you tour Australia soon. The biggest venues you’ve ever played here; how are you feeling?

Michael: It’s about time! I’m so excited to finally come back to Australia. It’s been two years! There was obviously the pandemic, so we had to cancel and reschedule and reschedule again, and now we’re booked in for October, and we’re coming no matter what!

We all know how much the pandemic sucked. It’s got to be even more exciting that this is finally happening after it stopped you so many times.

The pandemic did suck, but a lot of good things came out of it. My hair grew longer, so that was cool (laughs).

The lineup for your Brisbane mini-fest is stacked! Who will you be checking out?

I watch the show of every band we play with. At least for a bit. If there’s more than one band, I’ll watch everybody.

I still get nervous before going on stage, and what helps me overcome that is being side-stage or going out in the crowd and watching another band.  I love going into the audience and hiding off and just watching the bands, seeing what the crowd sees. It excites me, and it looks different to how it feels on stage. When I watch the opening bands play, it feels awesome – like fuck, we’re doing a concert, and it looks bitching. It makes me feel more comfortable, and it lets me check out all the great talent we have out there. So I’ll probably be watching every single band.

What else helps you overcome those nerves?

I have friends who experience the same thing before they go on stage. One of my buddies once said to me that I wasn’t nervous, just excited. Having that perspective makes things a little easier. But to me, we travel really far to do shows. The most important part of it is the 90 minutes we get on stage.

I want to be the best I can be. But like I was saying, what really helps me with that is just watching other bands play. I look at them and think to myself, I can see what they’re doing, but now I have to go beat them (laughs).

That’s what we’re about. Just having fun and making you laugh. I think people need that, now more than ever.
[Michael Starr]

Give us some memorable moments from the Oz tour circuit over the years.

I was just talking about this with a friend. I’d have to say Soundwave. We were welcomed by the Australian people and got this amazing feedback, and I’ll never forget it. Soundwave was the first time I was ever in Rolling Stone. It was a picture of me, but the article was about my band. It was really exciting, such an I made it moment.

We did a couple of amphitheatres, and that was rad. We’ve headlined. It’s been such a great journey for us in Australia, and the springboard was Soundwave. It introduced us to a lot of people who might not have seen us otherwise.

Now we hope that Download Australia books us. It’d be nice to be on stage with a bunch of the bands we’re friends with and have a great time together. All those festivals are a big camping trip for bands. We get to hang out, drink after the shows, and chill together. When you’re headlining your own show, you get to hang out with your buddies and the opening bands, but it’s fun to have all your friends from different bands hanging out and shooting the shit. At the end of the day, I feel very fortunate to be in Steel Panther and to be able to tour around the world and play for people. It’s the dream I’ve had since I was a teenager, and it came true.

Do you have any fun, behind the scenes memories from those kinds of tours?

All the fun really happens in the bar at a hotel. People figure out where you’re staying, and it just becomes a party. Normally, bands don’t have tour buses in Australia and instead have hotel rooms. So you’ll have the bar to get drunk and a hotel room to go have sex in. It’s great.

For anyone who hasn’t seen a Steel Panther show yet, what can they expect?

If you’ve never seen Steel Panther before, but you’ve heard of us, just try to come to the show with an open mind. Remember, you’re there to have a fun time and get drunk with your buddies. That’s what Steel Panther is all about. Making you laugh and giving you the ability to escape whatever is going on in your life for an hour and a half.

Just have a laugh, have a beer with your buddies, see some titties and hear some bitching heavy metal. That’s what we’re about. Just having fun and making you laugh. I think people need that, now more than ever.

Can we expect to see new music soon?

Yes! I finished the vocals last week. We’re having our producer mix it now. He’s already done four songs. Once that’s all mixed, and we come up with an album title and a song order and artwork, we can solidify a release date. We’re hoping to release it in the first part of 2023 if everything goes right.

I can’t wait for people to hear it. Every Steel Panther record has been slightly different, but we’ve still stuck to our core roots – singing about fucking bitches, partying and having a good time. That hasn’t changed, but after being together, doing music for a while, you naturally change just by getting older. So I think people’s minds will be blown when they hear this record. They’ll be pleasantly surprised at how we’ve still been able to write bitching songs that resonate with people, no matter their age. That’s the beauty of Steel Panther.