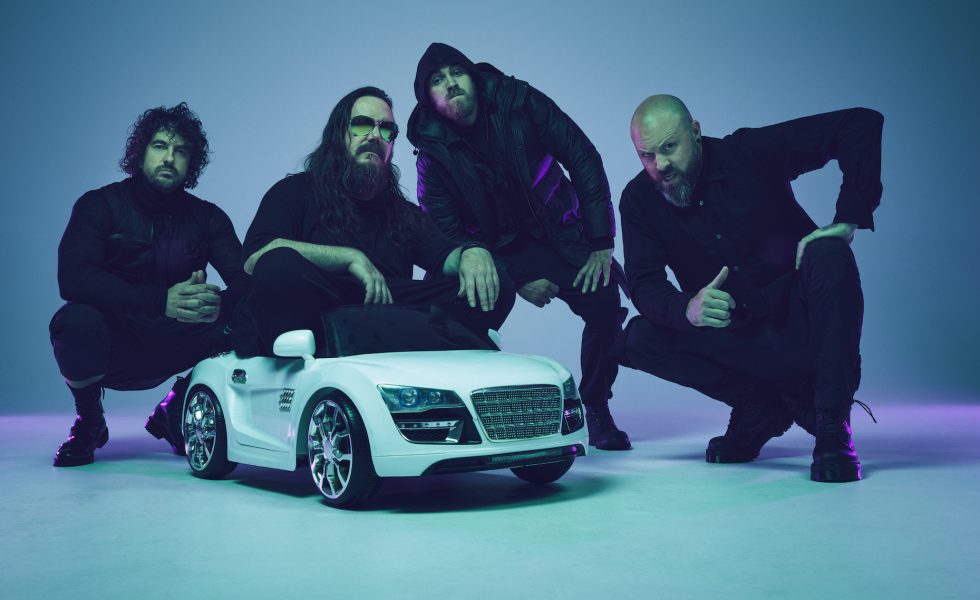 “I think anything with rhythm and pitch can be manipulated into a song” states Stevic MacKay, as he discusses the new Twelve Foot Ninja album.

Being no strangers to innovation, Vengeance, the groups newest effort highlights soundscapes and experimentation not only new for the band, but for music in general.

As explained by the group’s self proclaimed “ideas man, I actually use an old school dial up modem, which I digitally tuned for one of the songs on the album.”

Expanding on how an internet modem found its way into one of Australia’s most hyped prog metal releases of the year Stevic said, “Everyone who ever had dial up would remember that ‘brnnng, pewpewpew’ sound it makes. But, it actually has a beat to it and it matches the tempo of the song.”

“First I sampled it and then I tuned into the nearest note in the key of the song, it plays a bit of a transitional role between different sections of the track.”

Although, it wasn’t just old pieces of tech-trash that found it’s way into the album’s liner notes, with the group also incorporating a 12 piece orchestra and the inclusion of a Tibetian ‘kangling’ on lead single Start The Fire.

For those unaware of what a kangling is, it is one of the only instruments in the world that can be shown on an X-ray. Why? Because it is made out of the bone of a human femur.

“The kangling was an instrument that always interested me,”

“It’s considered to be the ‘sound of death’ and is made out of the leg bone of a human, which I find to be a very interesting combination of features.”

“I wrote that into the graphic novel and it became a part of the story, so I felt it made sense to use it on the actual album.”

I actually use an old school dial up modem, which I digitally tuned for one of the songs on the album.
[ Stevic MacKay ]

By mentioning the graphic novel, Stevic also highlights the incredible release cycle that Vengeance is gearing up for. In addition to the album release, Twelve Foot Ninja have also dropped a videogame and are nearing the release of both a high fantasy novel and a graphic novel, which was written by Stevic. Touching on the newest album, Stevic said

“We knew what we wanted to improve on, which made writing really easy.”

“Each album has been a bit of an experiment, whether that is referring to the content we are writing about, the compositional structure, the production and how we do it and what resonates with people the most, we try to really look at it from that impartial perspective.”

“After Outlier I think it was really evident what we needed to do to improve on it. We are seeing that with ‘Start The Fire’, which has been getting a lot of traction in America and if you are looking at it comparatively to the same time as Outlier, it seems like this album is looking at doing even better.”

Although a positive reception isn’t always enough to calm nerves, with Stevic openly stating how the Covid impacted time off the band has had, has led to enhanced anxiety for the release.

“I think it’s a mixture of feelings,” he remarks.

“I’m not sure if heightened anxiety would be the right term but there is almost an apprehension because we haven’t played for so long that it almost feels like a distant memory.”

“Going from being locked in a studio to going out and playing, does feel like a bit of a mental barrier, even though it’s the logical move that all bands make. I think apprehension would be the word, mixed with just wanting to get into.”

“They are contradictory terms but that does kind of sum up the paradoxical mixture of feelings that I’ve been getting for this release… I could have answered that question better by just making noises, but that’s how I feel about it.”