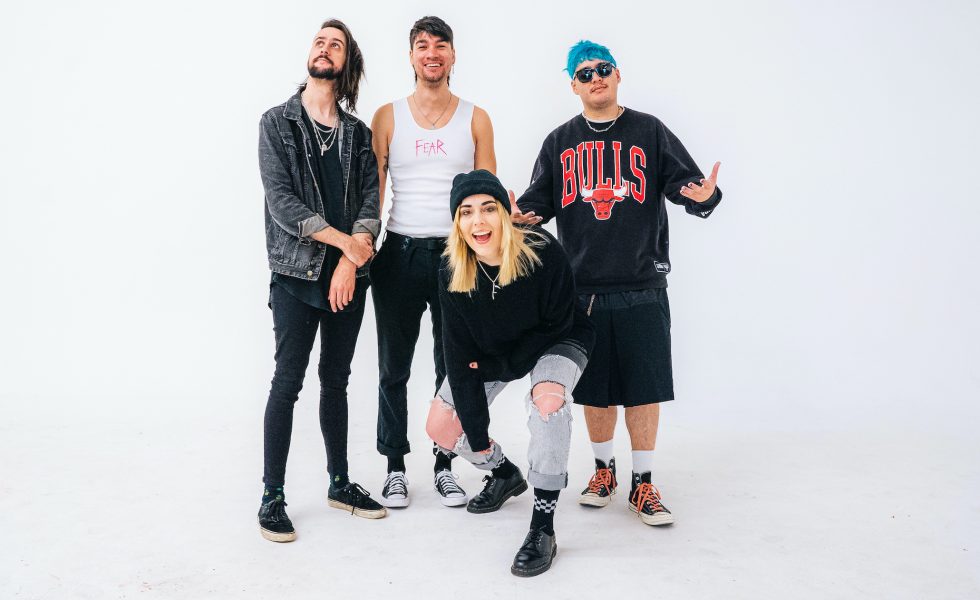 When it came to their new album, Stand Atlantic had two options: Face everything and rise or fuck everything and run. They chose the former. Fuelled by frustrations, they faced the crushing realities of the last two years head-on, culminating with their most exciting record yet, F.E.A.R. (ironically, short for Fuck Everything and Run).

We caught up with vocalist/guitarist Bonnie Fraser and bassist Miki Rich to chat about how it came together, throwing the rulebook out the window and more.

Hysteria: F.E.A.R. – tell us what that title means to the band and how you landed on it.

Bonnie: It’s weird. I’ve always had the title of an album before we’ve written it. I’m either really dumb or really smart. I’ll let you pick which one.

I had it written down, and I kept trying to put it into a song. It wasn’t working, I thought I’d ditch it, and I just forgot about it for a while. But then, when the album was done, I was struggling to think of a title. Because it doesn’t have a concept or anything, it’s just shit feelings. Should’ve called it that, actually (laughs).

So anyway, I went through my notes and found F.E.A.R. – fuck everything and run. And I thought it made sense with the album. So I ran with it. No pun intended.

What was going through the band’s mind when you first started thinking about F.E.A.R. It must’ve been tough, not being able to tour Pink Elephant and the pandemic dragging everyone down into this big negative void.

Bonnie: That was the thing. I didn’t know what the fuck to write about. I felt like I hadn’t lived my life or experienced anything new; this sucks. Usually, I try to lean into it and write about it when I feel like that. It all kept ticking over, and eventually, I made a whole album about being annoyed. There was no moment where I was like, this is what I want this album to reflect. It was just all these real feelings, and that’s how it came out. The guys were feeling the same way. And everyone else was too because it was a shit way of life.

So that was how it came together. I apologise; there’s not much hope in any of the songs (laughs).

We 100% feel that, but we reckon to be able to put it out there and get catharsis makes it a little hopeful.

That’s it. So how did it feel for you to put all that shit into these songs and say, hey, we’re angry, but we’re putting it out there in our art?

Bonnie: Yeah, it’s like a positive outlet for negative shit.

Miki: I feel like that’s what you always do.

Bonnie: It is. I don’t really talk about my feelings much. I’ve always just written songs. It’s how I’ve dealt with shit in my life, how I’ve gotten over a feeling or moved on from something. Just put it in a song, and you’re good (laughs). It was 100% good to get it all out, though. Now we can just move the fuck on.

Bonnie, with you living in Manchester and the band living in Australia, what challenges did you experience putting the album together?

Miki: It didn’t really make a difference. Bon came back to Australia to record it anyway, but because of COVID restrictions, we had to do the whole album one at a time. It wasn’t at a studio. The drums were done at Jonno’s (Panichi, drums) house. The rest was done at Stevie’s (Knight, producer).  So we all went in one by one, we couldn’t see each other. We recorded our parts and said good luck to the next person (laughs). If she had done it from afar, it wouldn’t have mattered this time.

Bonnie: Normally, I’m never apart from the guys in those situations. I came back to Australia for six months because we had that tour, which got postponed a billion times. And we wanted to write the album too.

I’d done a bunch of Zoom sessions with other people in the meantime, and I fucking hated them. It was crap; it’s not the same as writing in the same room as someone. Having that back and forth and getting the vibe is so much easier in person. For this record, I stayed at Stevie’s house for seven weeks, and we wrote and recorded everything during that time. It was satisfying to finally see someone in person and create something that way instead of doing it over Zoom.

We’d call this your most diverse record. There are so many different sounds on offer and Bonnie’s screams. What drove you to bring all that in?

Bonnie: I’ve screamed on every album, but we went fully into it this time. It was that fuck it attitude. There was a point where we didn’t know what the world was going to do. We were promised things would open up, and then they didn’t. Things were touch and go. We had the attitude that we might not be able to release another record after this because the world might go to shit. So we wanted to do everything we’ve ever wanted and just be unapologetic about it.

We started it with Skinny Dipping. We tried to do something a little different from the normal pop-punk. Then on Pink Elephant, we pushed the envelope a little more.

Miki: And on this one, we were like, finally, blast beats (laughs).

Bonnie: It was important for us to do that. I think there’s a song for everyone on this record too because we didn’t box ourselves in or have any limits to what we wanted to do. It was exciting for that reason.

There are a few collabs on the record. How was it working with some new people?

Bonnie: It was cool. We had nothing,nowhere. on Deathwish, Royal & The Serpent on Pity Party and Tom The Mail Man on Dumb. It was nice to breathe new energy into the songs. The strategy behind it, if you want to call it that, went back to us not wanting to be boxed into any genre. We don’t want Stand Atlantic to be that kind of band. The only band we want to be like is Stand Atlantic. Adding these different artists from all these different worlds was important to us. We’ve never really done it before either. We have one on Skinny Dipping with Hannah Hermione Greenwood from Creeper, but that’s it.

You’ve spoken about having so many demos for this album. Will we ever see bits of those tracks anywhere?

Bonnie: There is a bit of one of them on the very last track. It’s so subtle that you probably won’t be able to hear it, but that was a little Easter egg.

Miki: We had 30 or 40 demos. We initially planned to do 10 or 11 songs, but we ended up with 14. We like some of the tracks that didn’t make the album, but we were passionate about everything that did. So it’s okay if some of them don’t ever see the world (laughs).

Bonnie: Some of them aren’t even finished. We might go back to them one day when we’re stuck.

You must be so stoked for your upcoming tour; what’s in store?

Miki: We were talking about this the other month. Hate Me (Sometimes) was released a billion years ago, and we’ve never played it in Australia.

Bonnie: We’ve only played Skinny Dipping songs in Australia. How cooked is that? It’s awesome that we’re finally coming back. It’s vindicating that it’s finally happening.