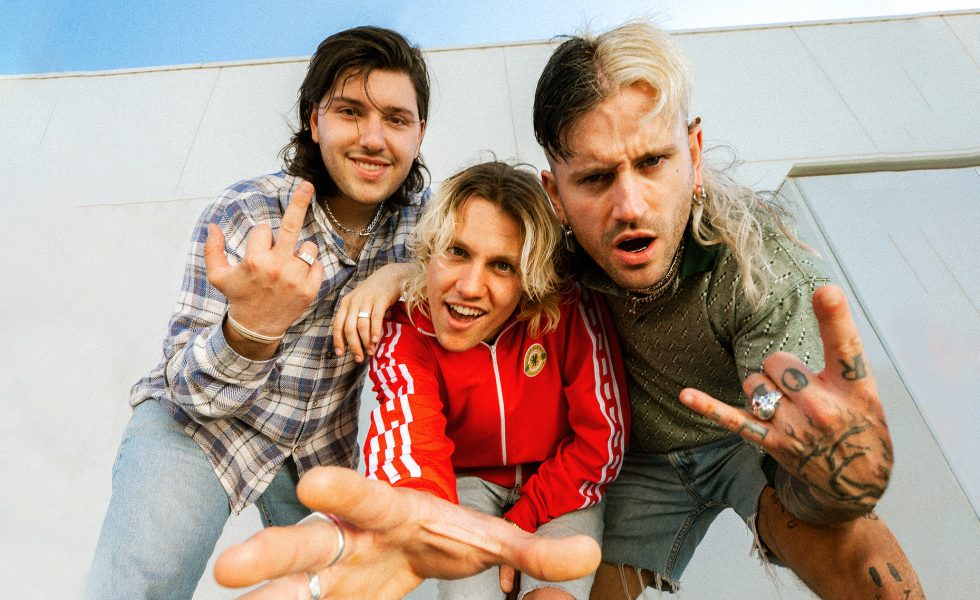 OCEAN GROVE // Another Voyage To Oddworld

Melbourne’s Ocean Grove has always been up for a challenge. But on their third record, they faced their biggest one yet, and they conquered it.

This was the desire to champion one core idea, and it’s what birthed Up In The Air Forever—an ambitious, sunny offering with the mantra of PMA at its core.

While less weird than some of their last records, LP3 is just as wonderful. We caught up with frontman Dale Tanner for a deep dive into this change, what it meant to the band and more.

Hysteria: Take us into your minds. What direction were you thinking of taking when you first discussed the follow-up to Flip Phone Fantasy?

Dale: When we set out to write this album, we understood we wouldn’t be able to tour Flip Phone Fantasy at all for an unforeseeable time. That was shattering, but we came to terms with it and decided the only way forward was to write more music. It was the only way we could be productive during lockdown. We hadn’t had the chance to experiment or get a fair indication of what songs people liked or not. When you play live, it’s a great way to ascertain that.

So we had a bit of a lucky dip of what we’d write next. And in that respect, the approach was unique. We felt like the only way to bring ourselves out of the collective rut the pandemic had brought upon us was to get back into the studio and write the most positive and cathartic album we could. That’s what a lot of this album is centred around – this idea of PMA (Positive Mental Attitude). And challenging your mind to see every disadvantage as an advantage and every negative as a positive. This worldwide phenomenon of COVID threw everything into chaos, and there was a lot of negativity. We thought the best way to combat that would be to instil the listener with this idea of PMA and write music that complimented that.

As anyone listening to the album will tell, it’s very much focused on the summer anthems’ vibes. It’s very uplifting and energetic, and that’s what we were aiming for when we set out to write it. Looking back, I truly feel like we achieved that. I hope any listener can use it as a tool during difficult times.

We knew taking that approach would leave some people thinking we were stepping away from being that kooky and experimental band. We had to be at peace with that and that we couldn’t get away with both.
[ Dale Tanner, Ocean Grove ]

What struck us about the record was how varied but accessible it sounded. We’d call it your most normal yet.

We were taking everything that felt right to us from Flip Phone Fantasy. We honed in on a few key components and sounds instead of going down the path we have in the past of throwing a total mixed bag at the wall and seeing what sticks. That has been fun, and we’ll always be a band that experiments with new sounds, but with this album, we made a conscious decision to hone in on a few. We didn’t want to spread ourselves too thin and try too many things. And as I said, we wanted to convey this really potent idea of PMA – one digestible capsule for people to say from start to finish they really understood what we were trying to do.

With other records, what’s caught people is how bizarre and chaotic they are. That’s something people really like, and I like it too. So for us, the sheer notion of experimenting with this album was it being something we’ve never done. We’ve never actually focused on just one idea and tried to execute it. That alone made it challenging and something new to us.

We knew taking that approach would leave some people thinking we were stepping away from being that kooky and experimental band.  We had to be at peace with that and that we couldn’t get away with both.  There are a few moments in the album where we delve slightly into the melancholy, but going too far into those other realms would’ve detracted from the core idea we were trying to communicate.

I’m so content with what we’ve achieved on Up In The Air Forever and its overall sound. You can really see that evolution and the full-circle moments from Flip Phone Fantasy. Moving forward, it’ll be an open playing field, and we can experiment again and do some crazy stuff we haven’t before.

It must be exciting too, not knowing what you’ll do next. I know it’s exciting for us as fans.

I think our listeners have come to a point where they expect the unexpected. We take a lot of pride in the fact that we can do what we like and our fans understand. They know it won’t be our sound forever. So it’ll be exciting with our next release, whatever it will be.

I’m so ready to get back into the studio. We had to leave aside so much material for this album to have that cohesiveness. There are a lot of different sounds and ideas we have ready to go. We’re just waiting for the right package to deliver them in.

Why was it so important for you to spread the message of PMA?

For us, this ethos of PMA is at the core of who we are.  I’ve grown up believing that it’s one of the best ways to make a significant difference and influence those around me. When it comes to creating art, there are a thousand and one ideas you can try and impart on your audience. This idea of having a positive outlook and taking all your circumstances for better or worse and using them as an opportunity to grow. When I’ve put that ethos to the test day in and day out, it’s proven to be the most foolproof strategy. I’ve seen it have such a  massive impact on my own life. When I look back on the difficult times, I see how they were actually the most positive gifts I could’ve ever been presented with. From those experiences, I grew and became the person I am today.

We’ve been hinting at this message with previous releases. But now, especially with me being frontman and having more of a chance to contribute lyrically, I couldn’t sit around any longer and not have this be at the core of OG. I believe in it so much, and I back it. I want everyone to be able to adopt it. Especially after the last two years, everyone could do with a good dose of positivity and some strategies for coming out of this collective darkness we’ve all been feeling.

I think our listeners have come to a point where they expect the unexpected. We take a lot of pride in the fact that we can do what we like and our fans understand.
[ Dale Tanner, Ocean Grove ]

The album’s art is so striking. Tell us how it came together and how it ties into the theme.

When we landed on this idea of the shoe, it was pretty thrilling. It symbolically represented so much. And Brent Engstrom, who does the Garbage Pail Kids cartoons, was keen to bring it to life.

We wanted this big omniscient, almost oppressive looking shoe, breaking through the wall and trying to squish us as we ran away. The more rebellious, anti-establishment, anarchic messaging of the album came through from there. This big shoe may represent authority, CCTV, government, the bully in the schoolyard – whatever. Its presence may be in our life, but we can break free from it.

This breaking through the wall and us running out or into the Oddworld. That was us presenting this idea of another way, another reality and another way to perceive reality. Maybe the reality that we see around us isn’t actually what we’ve come to believe. Maybe this sensory world around us isn’t the true reality. Maybe there’s another real reality that exists in another dimension. We were getting into those realms of thinking.

This shoe represents empowerment. It’s a transportation/transformation device. We’ve actually got these shoes manufactured, which has been really cool to round out the idea. They’ll be up for sale very soon. They’re called the ODDWORLD 3000. They’re something that the listener can slap on their feet, and it’ll empower them and give them the sense that they can overcome these powers of oppression and these negative, exploitative factors around them.

Up In The Air Forever conveys the idea of floating, being empowered and rising above. We want the listener to feel amazing and special because they are. They have an eternal spirit that can’t be conquered by these contractive measures.

Something like a shoe, used in sports advertising, enables athletes to take their game to the next level. We co-opted that idea so it could be a more universal symbol of empowerment. It’s not the shoe doing the magic; it’s the idea of putting it on and having this new PMA outlook on life. A new perspective.

That is sick! When can we expect to see the shoes?

Unfortunately, they were delayed because of COVID, but we expect they’ll be here in the next week or two. As soon as we have them, they’ll be up online. I imagine when we’re on tour, we will have them. People will be able to buy them at the shows. They’ll come in a special ODDWORLD 3000 shoebox. We’ll have socks. We’re having interchangeable patches made that velcro onto the side of the shoe. The shoe will come with the OG logo, but those patches can be subbed in.

We’re hoping to get some other bits like varied laces.  Maybe even a crep cleaning kit. We’ve got to make sure people are keeping them in good fashion. I’ve even got some of those hospital sockettes that go over a shoe if anyone comes to a gig and wants to wear them but doesn’t want to get them dirty. Shoot me a message, and I’ll sort you out (laughter)

You must be excited about your upcoming tour.

Definitely. We’re going from no shows in two years to staring down the barrel of a hectic year ahead. We have our headline tour next month. Those shows will be really special because we’re playing all the songs from both Up In The Air Forever and Flip Phone Fantasy. We’ve never played a set as long as this one. It’ll be a unique OG experience for that factor alone.

We have Full Tilt and Monolith festival too. We’re just so blessed to be back out on the road touring, doing what we do best.