SPKEZY // Whose Sound Is It Anyway? 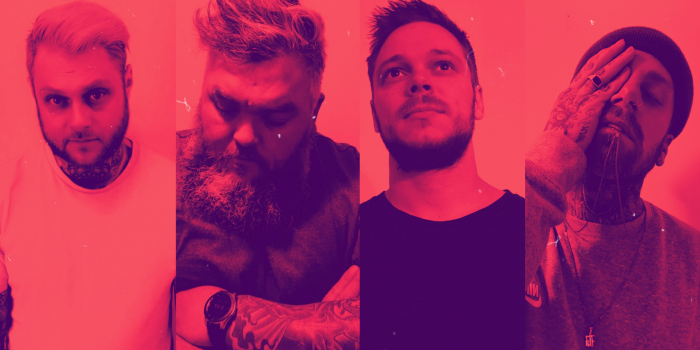 Huey Lewis and the News, Justin Bieber and Bring Me the Horizon … it may sound like an odd combination but it’s exactly what inspired SPKEZY on their debut Midnight Club.

The EP is a solid mission statement for the Tasmanian’s and a surefire sign of their huge future. Ahead of its official release, we caught up with frontman Luke Vaessen to chat all about it.

Hysteria: Let’s get the band introduced. How did you all come together?

Luke: We’ve been playing music together for ten years, some in the same band and others not. Two years ago, we just decided we wanted to do something completely different and be more in line with our influences.

Tell us about the creation of the Midnight Club EP?

We’re lucky that Joel (Hallam, guitars/keyboards) has a home studio. We can go there and write, record and do whatever we need to do really. With our writing, if we liked it we liked it and if it sucked, it got chucked in the trash (laughs). These six songs best represent what SPKEZY is and what we sound like at the moment.

When did you put the EP together?

We’ve been recording the whole thing for the last eight months. In all honesty, it wasn’t going to be an EP, we were just going to release a bunch of singles. We all thought that the songs sat well together, so we decided to put the EP out instead.

These six songs best represent what SPKEZY is and what we sound like at the moment.
[ Luke Vaessen ]

Despite your roots in metal, there are so many different genres on the record. Tell us about that.

Coming from metal and rock, we still have that in all our songs. Even with the songs we’re writing now, that base is still there because that’s what we were brought up on and grew up playing. The main two genres that we really wanted to show were rock and today’s sounding rap and R&B. We found other influences along the way, for example, Joel is really influenced by 80’s sounding stuff like Huey Lewis and the News and he really wanted to incorporate those synths in the EP. That’s how we ended up with all those influences.

That whole rock/rap fusion is so big right now, it definitely feels like the right time for this EP to be released.

When we first started recording songs that was the main thing. We wanted it to sound like Post Malone, but with a full, rock band base. We got a little bit sick of writing that type of stuff though. The more we wrote, the more influences we wanted to push through.

Did any other artists influence the band?

Chase Atlantic would be one. Don Broco is another, they do such a good job of mixing rock and dance music. Then you’ve got Bring Me the Horizon, specifically amo and their poppier sounding stuff. Joel is also really big on Halsey and Justin Bieber and trying to have that slick production.

Did you run into any challenges, experimenting with that poppier production?

Not really, we had a pretty smooth transition! With the whole COVID thing, Joel was really able to focus on his recording and production skills. I don’t think we had any roadblocks coming from the sound but there were definitely some when we were writing the songs. Some just didn’t come together properly or they didn’t sound the way we wanted them to.

The EP is inspired by love and loss, was it challenging putting all those emotions on display?

Yes and no. We did that with our old band and I feel like it was harder then because, every time you performed, you’d leave a bit of yourself up on the stage. It’s hard to write about some of this stuff, all of it has happened to me but it’s come down to whether or not I wanted to show it from a first-person point of view or an outsider’s perspective.

What can we expect to see from the band’s sound going forward?

There’s definitely going to be some more blending of genres but it’ll be more cohesive. On Midnight Club, all those songs lend to those different genres but now we’re trying to blend them all together in one song.