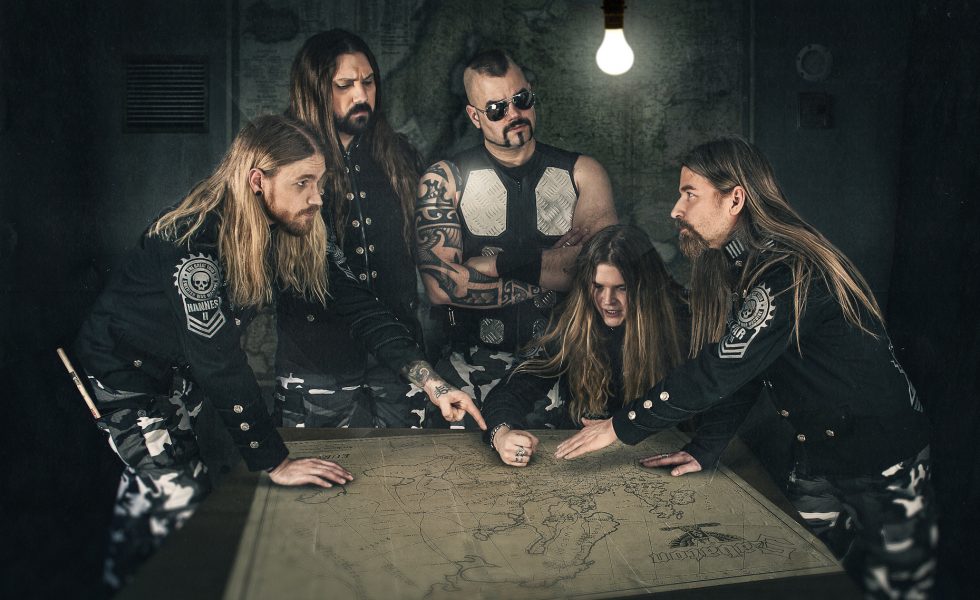 SABATON // Once In A Lifetime

Sabaton are no strangers to the topic of war. The Swedish giants of power metal have unleashed a number of albums that hail historical battles, war heroes, and battle scenes from the past.

Now with their ninth album, The Great War, Sabaton celebrate twenty years of mighty music with a staggering sonic foray into The War To End All Wars; the first truly global conflict that raged for four years, three months, and two weeks during 1914-1918.

Given Sabaton’s longstanding interest in military history, the question looms; what brought their attention to WWI this time? “The First World War is very awesome,” bassist Pär Sundström says. “Often, it is overshadowed by World War Two, at least in the European scene, but coming up to the one hundred year anniversary of Armistice Day of WWI made it like there were so many people talking about it…and I think that this was one of the main things that made us think, ‘okay now is the best time, we won’t get a second chance at this one, at least not in our lifetimes, to get so close to a century ago’…but also that lately there has been nobody who has fought in WWI who is still alive today, while there are still a few from the Second World War. With people dying things get forgotten.”

The Great War has two versions – a normal album format and a ‘history edition’, which features the voice of a narrator. On why Sabaton have issued different version, Sundström says, “We have actually done it in three versions, but the third one is not really revealed that much yet. There is a third one that is called The Soundtrack To The Great War, which is more orchestral and instrumental version of the album as well. But why we decided to do the two main ones – the history version and the standard edition – is simply because there are a lot of people today who like to enjoy music by just choosing their favourites, one or two songs, put them into their favourite playlist, and just let it be like that. They don’t want the whole album. And then there are those who really want the full album. For those people who really want the full album, the history version gives a little bit deeper.”

I think that this was one of the main things that made us think, ‘okay now is the best time, we won’t get a second chance at this one, at least not in our lifetimes, to get so close to a century ago’…but also that lately there has been nobody who has fought in WWI who is still alive today, while there are still a few from the Second World War. With people dying things get forgotten.
[Pär]

Historians do revel in asking deep questions, and so too the narrator of the ‘history edition’ of The Great War asks perhaps the most penetrating question of all: what is so ‘great’ about war? As Sundström says, the title track epitomises one of the main threads throughout the album. “It’s a bit controversial,” he begins, “and we saw it immediately when we started writing the album. WWI basically has three different names: it’s called ‘World War One’, it’s called ‘The War To End All Wars’, and it’s called ‘The Great War’. And of those three, definitely ‘The Great War’ is the most controversial, because war is not supposed to be ‘great’…if somebody were to call it the ‘large’ war, or the ‘major’ war, then it would make more sense than to call it the ‘great’ war, but calling it ‘The Great War’…people may ask ‘what is so great about war?’ and the title track is a little bit like that, and also inspired by the front cover, where we wanted to show that war is not that great. So that was the idea for this song as well.”

This sense of the mixed legacy of WWI is laced through the album, and seems to culminate in the second-last track, The War To End All Wars, which is of course an ironic name for the war, the closing of which essentially set the conditions for WWII. “Yes, again,” Sundström confirms, “it is difficult to tell so much in so little music. So this was an interesting song, in which we thought, maybe we should try to make, like, a fifteen minute long song and make it super graphic, and after starting to write it, it simply didn’t turn out that way. It’s an interesting song though, constantly evolving, and constantly being bigger and bigger, and never going back, so to say, but we didn’t make it into a fifteen minute song so we couldn’t go into much deep stuff about it, but a quick recap of the war and telling a little bit about the outcome of it.”

”… and I suppose if somebody wants to know more about the whole war, there will be a Sabaton History Channel episode to look into.”

So, prepare your speakers and notebooks, Sabaton fans…