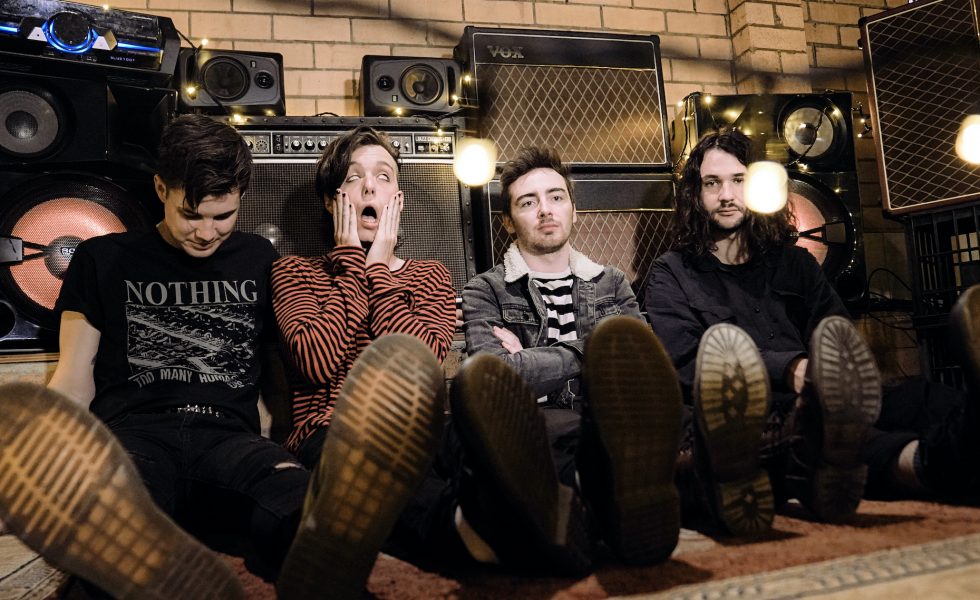 PREMIERE: MONSTERS UP NORTH // All Our Flowers Are Growing Sideways

Brisbane’s Monsters Up North are back with another ripper tune; All Our Flowers Are Growing Sideways.

Frontman Lachy Kerr drew influence from his own romantic relationships, using his feelings of doubt to fuel the emo turned pop-punk fire. Before the track officially dropped, we got him to run us through how it came together and more.

Lachy: I was playing some acoustic shows around the valley, and Corey (Neal, drums) came to one of them with his brother. Afterwards, he approached me and asked about a band, and I said I’d love to start one. We started practising, I put an ad up on Facebook on the Brisbane music scene, and Max (Lyall, bass) answered it, saying that he was keen to play bass for us. Max’s old band, Astoria Paranoia, had actually been in contact with my old band as well. So he kind of liked what I did already, and we knew it would be a good match from the get-go. We recently added Lachlan (Cope, guitar) as a second guitarist. He is the guitarist from one of my good friend’s bands, Toluca Lake. He felt like the final piece. I feel really happy now; the band feels full.

Let’s dig into what inspired the new track All Our Flowers Are Growing Sideways.

One night, I was just having some doubts about a relationship I was in for over a year. It just got to that point, and I wanted to work through those thoughts. So I just sat in bed and had my notes app open and was just writing some thoughts. And eventually, I gave it a rhyming scheme.

While I was in bed, I couldn’t really make much noise because I live with three other people. So I kind of wrote a bassline and a melody in my head and recorded it as a voice memo. And then the next day, when I got the band around, I showed them the bassline, drumbeat, and the melody, and then we jammed it out. And it became a song from that. But it just started out as the cold feet I was having in this relationship that was getting really serious.

The title of the track itself is so striking. Is there a story behind it?

Yeah, I love flowers. And I’ve always loved gardening; my nana’s really instilled that in me. I just think they’re really beautiful. People put a lot of time and effort into these things that really only bloom once or twice a year. And I think there’s a kind of beauty in that. The line all our flowers are growing sideways is a direct metaphor for relationships and plans in life. You can plant the seed and put all your love and time into something that might not grow the way you want. It might grow sideways; it might grow straight up to the sun, or it might not grow at all.

That’s such a good metaphor. So if we go back to the recording process, can you give us a standout moment?

It was amazing to see it all finally come together. A standout moment would’ve been when Lachy added his leads into the verses and the chorus. When he busted out what he came up with, I was just blown away, and it transformed the song completely but in the best kind of way. So I guess just seeing another person’s input in the song. It was really refreshing.

You’re embarking on your first-ever tour in support of this. Such a massive milestone! What are you most excited about?

I’m really excited in general. It’s cool that I’m in a band that’s come so far in such a short amount of time. I feel like I’ve never really been a part of something that’s felt so progressive and fun. I’m really excited about this special acoustic gig we’re doing at the end of the tour. We’re playing some brand new songs that have never been played to an audience before. And it also coincidentally falls on my Mum’s birthday. She gets to spend it with me here in Brisbane, so I’m really happy that I get to play some songs to her. I think that’s actually what I’m most excited about.

Can you share any details of your debut album?

This debut album has been in the works for the past year and a bit. When Max joined the band, we just started writing songs together from the get-go. It’s got 12 tracks on it, and it’s like pop-punk and emo – a bit of Blink, Taking Back Sunday. It ended up being darker than we initially planned. We thought it’d just be a pop-punk album, but then as COVID went on and lockdown went on, some of the songs took a darker turn. So it definitely paved the way for the next couple of tracks that we started writing.

Will we see more singles before it drops?

Yeah, 100%. We’ve got two singles planned after this one. They’re high energy, bratty punk. One of them’s called Not What You Expect, and it’s got a very big soundtrack to American Pie feel. There’s another one called Star Wars Cup. And that one is another self-meditative track about my personal experiences and thoughts with depression and suicidal tendencies.