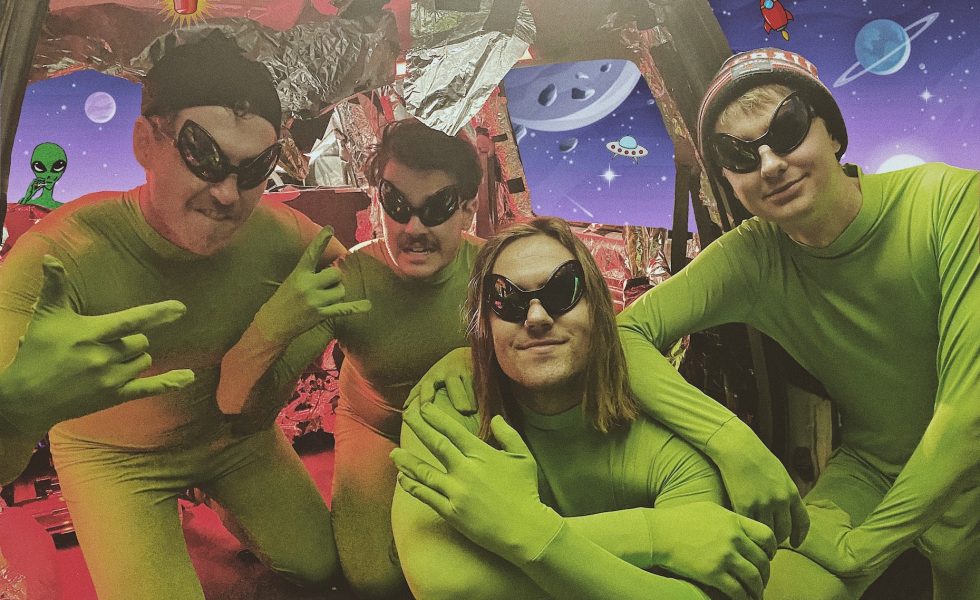 If aliens do exist, we reckon they’d be major fans of Adelaide’s Lickity Split. And with out-of-this-world tunes like Blinkin, it’s not hard to see why.

As the band explains, the track was inspired by the pop-punk greats, namely blink-182. We caught up with them for a chat about this and a whole lot more.

Lickity Split: We are Lickity Split. A nostalgic punk band from Adelaide (Kaurna Land) who intend to have as much fun as possible doing what we love … which is writing fast, energetic punk rock music. We draw most of our inspiration from bands such as blink-182, The Offspring, NOFX, Foo Fighters and The Living End – just to name a few!

We met at The University of Adelaide whilst studying Pop Music. The knowledge we gained was priceless, but I think the best thing we found was each other. It didn’t take long for us to become a band of best mates … and Reg (drummer).  Since then, we have played many shows and written an archive full of tunes, and we can’t wait to release more music.

What’s the story behind Blinkin?

So Blinkin was first written a couple of years ago. It has come a long way since Jamie (Selway, guitar/vocals) started the writing process. Originally it had nothing to do with aliens, but I think due to its very “Blink” like sound, we thought it would be great to tribute it to one of the greatest bands ever to do it … hence the title Blinkin. More specifically, we drew heavy inspiration from the blink-182 song Aliens Exist as we believe Tom DeLonge is right!

We changed the lyrics and altered the form of the song, which really brought it to life. I think Blinkin would definitely be one of our proudest songs to date!

The premise is that the alien versions of Lickity Split get stuck on earth and try to find a wormhole to get them back to their home planet.
[ Lickity Split ]

So how many strange looks did you get filming the music video?

We got so many strange looks, which we expected considering we were dressed in unflattering green morph suits for about six hours straight. One of the funniest parts of the day was when we ordered Domino’s. The delivery driver rocked up to us four extraterrestrial-like beings sitting in the back of our spaceship, Connor’s (Hudson, vocals/guitar) van, and completely lost it with laughter. He said this was a first for him and something he’d never forget! We asked him if he wanted to come back to our home planet with us, but he said he had too many deliveries to do.

It must’ve been such a blast putting it together. How’d it happen?

The idea of this music video happened very organically. We sat around one afternoon, and it seemed as though every stupid gag, idea and space pun made it into the video. The premise is that the alien versions of Lickity Split get stuck on earth and try to find a wormhole to get them back to their home planet. We relayed our vision to our videographer and director, Matt Caporaso, and he assured us that most, if not all, of our stupid ideas, would be manageable. So we all went out, bought green morph suits, alien sunnies and a shit load of al-foil. We also got a heap of second-hand printers, keyboards and other gadgets so we could smash them open and decorate the back of the van even more … I mean, the back of the spaceship.

Who’d you work with to record the track, and what was the experience like?

Blinkin is part of our latest EP, If Symptoms Persist, recorded entirely at home. Home being Zak (Stuart, bass/vocals) and Connor’s basement in Athelstone. Both of our EP’s have been home jobs. We find it to be very comfortable being at home whilst recording. Mainly so we can get on it.

After we finished the recording process for Blinkin and the rest of our EP, we then sent it off to the one and only Jarred Nettle (House of Sap) to get mixed. It came back sounding even better than we expected. When we got the tracks back from Jarred, we sent them off to William Bowden (King Willy Sound) to get mastered. Just like that, our second EP was ready to be released into the world.

I mean, you’re probably thinking we’re going to say bands like The Offspring, Foo Fighters and the almighty blink, but at the end of the day, it would be pretty fun to rock out with a choir of Tuvan throat singers.

Well, to be completely honest, half of our playlists are filled with local Adelaide bands. The band scene is going off here at the moment. Bands like Lola, The Lizards, Bad Dreems, Young Offenders, Teenage Joans, Towns, Looch. The list could go on!

Outside Adelaide, we’ve been cranking a lot of The Terrys, Dune Rats and Tuvan throat singers. Nah, seriously, we’re very proud to be involved in the Australian music scene!

We’ve been writing a lot lately, so releasing new music is definitely on the cards. We’d love to play some interstate shows before the end of the year. Oh, and we have a podcast coming out within the next month.