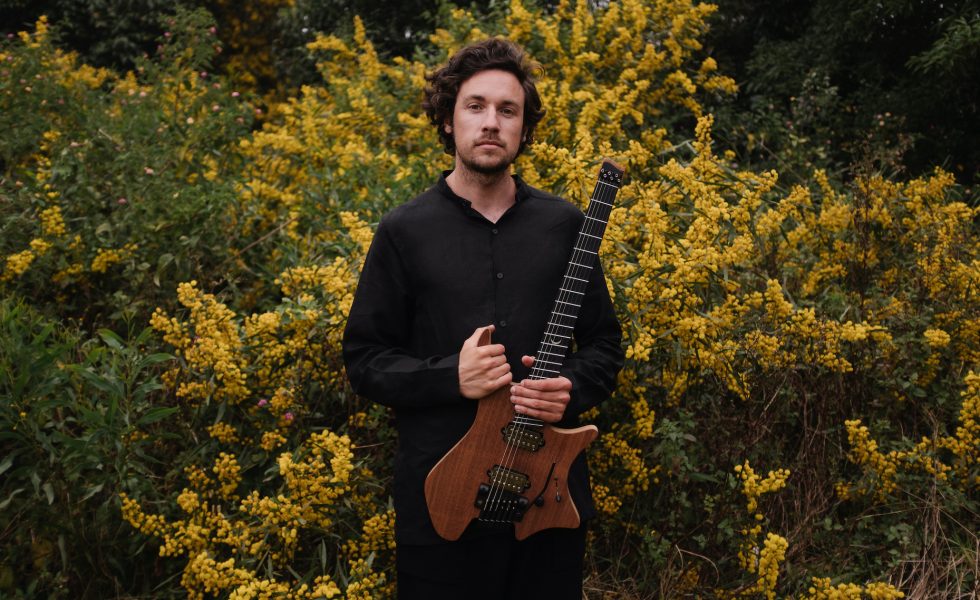 Dec 03, 2020 / WORDS Brian Giffin / PHOTOS Chad Dao / With the appeal of his music widening with each successive release, it might not be long before Plini’s songs feature more prominently on worldwide stages across various spheres.

No less a talent that Steve Vai has rained praise on Sydney guitarist Plini Roessler-Holgate, known to the wider world simply by his given name.

Like Vai, Plini found the world beating a path to his door after the release of his 2016 album Handmade Cities won global praise for his talents.

Four years and another EP later, the rather reserved guitarist has just issued his second full length album, Impulse Voices, bringing the overall total of his releases over the past nine years to eight including a split with Scottish musician Sithu Aye and an early work put out under the name Halcyon.

“The thing that holds [even more releases] back the most is myself,” he says in steady, self-effacing tones, “and I wouldn’t have it any other way.”

He talks about plans he made to record even more music during the last year, due to the inability to go out and play live – plans that went nowhere beyond what he had already decided to do before the world came to a halt.

“When it first became apparent that there would be no touring and a lot less activity,” he begins, “I immediately messaged so many friends, especially vocalists, that I wanted to write with, thinking that I could smash out at least another 5000 albums in the next month. And it’s so far gone approximately nowhere! Six months later, I’ve done one album, which is all I planned to do anyway. I think the extra time hasn’t added any productivity. It’s just given more breathing room for other parts of life. I haven’t written any more music than any other period, I’ve just had to do something else in between being inspired!”

Impulse Voices is a sweeping collection of eight tracks that defy casual pigeonholing, moving through various shades of rock and into pop, jazz and beyond. While previous endeavours have had his music classified as everything from progressive metal to djent, it’s clear that Plini is moving outside any creative box, and he’s more than happy about that.

Because it doesn’t sound like metal and it doesn’t sound like rock, it’s definitely not jazz and it isn’t really anything, and that’s probably because of the music I listen to. I guess it’s become more of a goal. The harder it is to describe, the closer I am getting to writing the sort of music I want to be writing.
[ Plini ]

“Because it doesn’t sound like metal and it doesn’t sound like rock, it’s definitely not jazz and it isn’t really anything, and that’s probably because of the music I listen to. I guess it’s become more of a goal. The harder it is to describe,” he says, “the closer I am getting to writing the sort of music I want to be writing.”

Plini’s playing and song writing has been compared to that of Joe Satriani, one of his childhood heroes and perhaps the most prominent figure in the popularisation of modern instrumental guitar music when his 1987 album Surfing With the Alien became a major crossover hit.

“He was one of the first guys to make instrumental guitar music that was more about still being a song, rather than a demonstration of skills. That’s always been a goal of mine. I’ll happily take that comparison as I would take some other more obscure thing that someone says I might sound like!”

Satriani’s model is one that Plini has followed, focusing on using his skills to write songs rather than just showing off as a virtuoso.

“I spend as much time thinking about how to get better at songwriting as I do thinking about how to get better at guitar,” Plini says. “That involves listening to a lot of stuff that doesn’t even have guitar in it, to figure out how to make something interesting for four minutes. If it has guitar in it, that’s cool, and if it doesn’t, that’s probably equally as cool.”

In the lead up to the release of Impulse Voices, Plini received a surprising burst of publicity from a completely unexpected source. After Doja Cat’s performance at the MTV European Music Awards, Plini’s fans pointed out that part of his song Handmade Cities had been used in the arrangement of her hit Say So.

“I wasn’t sure if it was intentional, but I found out the musical director was, or at least claims to be, a huge fan of mine,” the guitarist says with mild amusement. “I guess that kind of thing is more common in the pop world. The funny thing about it is that I didn’t make any judgement about whether it was illegal or wrong or good or bad. My fans heard it and just automatically ripped into the musical director and demanded justice for me. It worked out in the end, but I think the funniest part is that it happened at all. That something I wrote ended up on that stage, of all places.”

The incident was covered by the likes of Metal Sucks and even NME, with headlines suggesting that Plini was less than impressed by the use of his music without even so much as a thank you. In truth, it seems he was more amused than anything, and ended up in conversation with the American Music Award-winning performer.

“One thing that happened that was particularly hilarious is that Doja Cat sent me a bunch of DMs once she found out, and apologised that I wasn’t credited and said to the musical director, ‘If you like this artist so much why didn’t you just hit him up and work with him on it?’”

With the appeal of his music widening with each successive release, it might not be long before Plini’s songs feature more prominently on worldwide stages across various spheres. For someone who loves music of many kinds, it’s something he remains enthusiastic about.

“It’s ultimately amazing to cross-pollinate into a genre like that. The more we can do to reach out to people like that, the cooler it will be for everyone.”