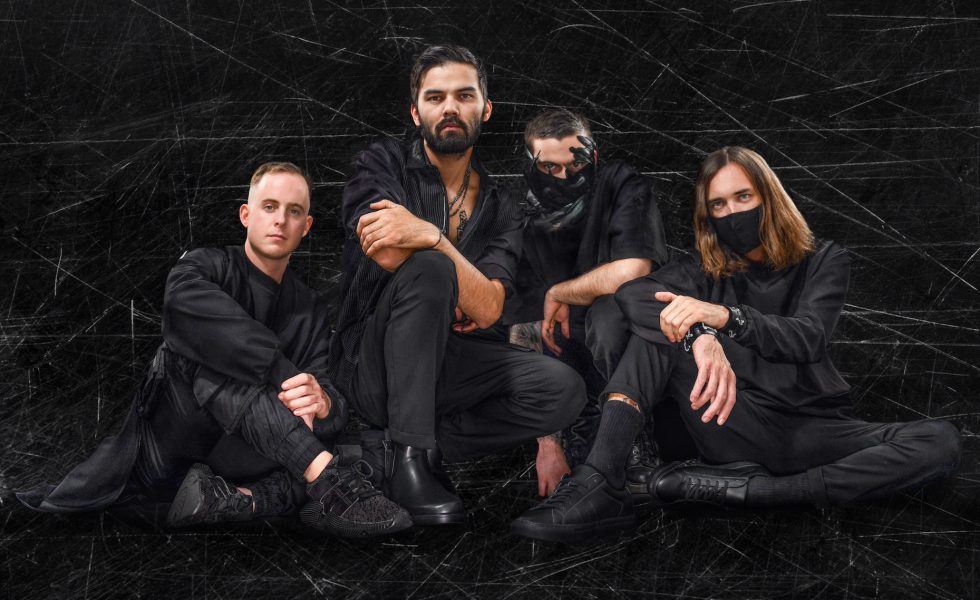 NORTHLANE // How Each Northlane Release Influenced The Oz Music Community

If Northlane’s back-catalog shows us anything, it’s that they are a group that is impossible to gauge what they will do next.

Although, considering their work shows constant stylistic changes that have proved to be an influence on other groups; and 2D debuts elements of Middle-Eastern maqamat and the incorporation of choirs, we are pretty damn excited to see what they tackle next and the impact that it will have.

Short.fast.loud blew up the career of a lot of Australian acts, one of the most memorable was Northlane. At 11pm on a Wednesday night in 2010, Stu Harvey’s voice chimed in: “Hey guys, this is a really new band that I saw as the first support act on Saturday night. They really impressed me, so I thought I’d give them a play. Let me know what you think; this one’s by a Sydney band called Northlane.”

As Metamorphosis streamed through the airwaves, listeners  (unbeknownst of the impact that Northlane would grow to have on the Australian scene) were in awe; the text line lit up.

Hollow Existence is by no means a perfect release. Its production quality is lacking and there are clear indications that Northlane were still very much a band trying to find their sound. But, not only are the songs great, they also highlighted how Northlane were actively trying to not fit into the box that had been paved by other groups.

Sure, characteristics such as frenetic and sharp riffs may have been previously popularised by Converge or The Dillinger Escape Plan and Adrian Fitipaldes’ acrobatic vocals and raspy highs at times bear similarities to The Black Dahlia Murder’s Trevor Strnad. But, in the realms of Australian metalcore, it was a relatively new sound. Songs such as Hollow and The Deadmines proved that metalcore groups didn’t have to adopt clean vocals and repetitive song structures to gain the popularity of bands like The Amity Affliction; they didn’t have to decide whether they would go the route of The Red Shore whose death metal and grindcore traits often deemed them too heavy for radio.

Instead, Hollow Existence proved to be the perfect stepping stone for Australian metalcore. It adopted the sheer breakdowns of Parkway Drive and merged them between the chaotic tempo changes of The State Of East London whilst presenting it with much more accessibility, ultimately giving fans of all kinds of metal subgenres the opportunity to discover a metalcore band.

Adding a layer of technicality and innovation to the local scene, it’s no surprise that Hollow Existence saw Northlane become quick favourites amongst Australian metal heads; expanded the sound of metalcore to tie in heavier groups like Hand Of Mercy and Make Them Suffer and got them signed to UNFD.

Having only started releasing albums in early 2011, We Are Unified (UNFD) quickly established itself as a metalcore label on the rise in it’s short tenure. Announcing The Amity Affliction’s Youngbloods, Dream On, Dreamer’s Heartbound and The Getaway Plan’s Requiem all within a few months of each other, UNFD immediately seemed to be the Australian equivalent to Rise Records, another label pushing the growing popularity of clean choruses in metalcore songs.

So when Northlane’s debut album Discoveries dropped in November of 2011, it felt like a stark contrast in the UNFD catalog. But that didn’t matter, from the opening twangs of Dispossession listeners were enthralled.

Honing in on their technical approach, djent inspired riffs and Nic Pettersen’s off kilter percussion that fuels each song’s sporadic and evolving nature, Discoveries ushered in a new era of Northlane. With production that showcases the groups musical intricacies and Fitipaldes’ lyrics taking a latin infused, yet DMT inspired direction, songs like Abrasumente and Dispossession highlighted the forward thinking approach that Northlane were still trying to grasp on Hollow Existence. Refining his vocal style, Fitipaldes’ screams in a much rawer tone, relying less on gutturals and highs and instead more on the emotion conveyed as he screams, a similar trait to what fans love in now prominent vocalists like Jamie Hails.

The instrumental title track Discoveries showcases the impressive musicianship of the group by presenting metal in one of its most elegant forms, a sensibility also shown in Transcending Dimensions; a breakup song tackling Fitipaldes’ hopes of redeeming a lost relationship in an incredibly honest display that strays from clichés of self-deprecating metaphors, or a pre-breakdown line calling a hapless ex a “bitch” or “whore.”

With songs like Corruption influencing the subdued style that Saviour and Storm The Sky embraced and the djent inspired rhythm sections in Solace marking similarities to jilted progressive riffs of Alpha Wolf, Deadlights, and Void Of Vision; Discoveries, now ten years on has proven itself as one of the biggest influences on Australian metal ever.

Singularity is when things got really crazy for Northlane. They were regarded as one of the most popular metalcore acts in Australia; indeed the world.

Singularity hit #3 on the ARIA Charts; taking out a top three spot in multiple AOTY awards and leading to sold out shows worldwide alongside Bring Me The Horizon and Asking Alexandria. Northlane had finally started gaining masses of fans both at home and Internationally.

Maintaining their metalcore, djent and progressive roots Singularity saw the group refine to a slightly stadium orientated sound through huge moments of openness and massive drops that translated incredibly to larger crowds. However, the immediate burst that it’s release saw in their popularity was something clearly not accounted for by festival organisers, as the group commonly packed-out small stages events, such as the ones Soundwave and Big Day Out had afforded them.

With Genesis/Scarab’s blistering bass drops, Windbreaker’s technical harmonies and mesmerising percussion on Worldeater, Singularity felt like Northlane at their best. Songs like Quantum Flux helped the group earn heavy Triple J rotation whilst Masquerade not only solidified the group’s brutality but helped break-through the career of Drew Yorke and Stray From The Path.

Although, the biggest influence that Singularity largely introduced was a celestial element to its sound.

As by Zakk Ludwig of Apate said, “At that time, Northlane were all the rage and they had just started bringing in that cosmos-inspired djent sound which we just thought, ‘fuck thats crazy’.”

He’s not wrong. Whilst the album’s imagery and lyrics focus on Egyptian mythos, the astral soundscapes that Northlane showcased ultimately paved the next few years of metal.

Straying away from synth inspired buildups, groups like I, Valiance, Architects and Prepared Like A Bride adopted inspiration from above in their music. Metal had moved towards a Northlane inspired style, helping to bring in an entire era of new groups like In Hearts Wake, Gravemind and I Prevail, all who rose in popularity through their take on the sound.

Considering Impulse, Rot and Obelisk may now be regarded as crowd favourites when Northlane hit the stage, they were quite divisive when they were released. With fans still reeling from the shock exit of Adrian Fitipaldes, many didn’t know what to expect when the group announced a new album with replacement frontman Marcus Bridge.

Earning enough pre-orders to reach the bands first number one ARIA Album Chart entry, Node felt like the most hyped release of 2015. (Felt like? It was!—ed.) So when it’s release premiered a departure from the bands metalcore roots to a more Periphery inspired prog-metal sound, fans didn’t know how to take it. Although it’s repetitive nature differed dramatically from previous works; as did Bridge’s vocals being primarily cleans, it felt like the kind of alternative metal Northlane had been gradually moving towards with each album.

With Parkway Drive’s, Ire and Bring Me The Horizon’s That’s The Spirit both being released in 2015, some metalcore listeners weren’t quite ready for the change to progressive metal, but for many it marked a new transitional era of the group that has seen them grow to ever greater levels of success and influence, even seeing the group win their first ARIA award.

In a surprise move, Equinox saw Northlane join forces for a 12 minute collaborative EP with eco-core warriors In Heart’s Wake. This was a big deal; even earning multiple magazine covers including one from here (Vale Hysteria Mag, as an actual mag.) Merging the bands’ sounds somewhere in the middle, Equinox uses heavy rock based riffs, which when combined with three vocalists allowed both acts to step outside the expectations of their sound. Clean vocals carried much heavier tonal qualities, a step away from both Northlane and In Hearts Wake’s usual place in the high register. Its overall demeanor feels like a precursor for bands such as While She Sleeps, who moved towards a stadium metalcore sound on 2017’s You Are We.

Expanding on the style established in Node, Mesmer saw Northlane perfect their alternative prog sound. With a return to heavy djent riffs bouncing between lements of nü- and industrial metal, Bridge’s vocals sounded much more at home within the group. Mesmer solidified Northlane as the new faces at the forefront of the previously American dominated ‘prog-metal’ scene.

Mesmer also proved to be the group’s most prolific and influential album to date. Seeing it’s release in early 2017, Mesmer’s groove laden djent style played a big part in redirecting the sound and expectations of metalcore into being more alternative and experimental.

Acts such as Architects, Thornhill, Deadlights, Erra, The Brave and Polaris all saw dramatic changes in their style, with many straying from their traditional metalcore stylings to incorporate more technical rhythms, lower bass tones and off-kilter percussion.

Now 4 years since it’s release, Node has completely transformed the metalcore scene. With bands getting harder and harder to categorise to a genre and a large portion of UNFD’s roster dabbling into prog-metal, it seems that Northlane’s directional change worked as a catalyst for many groups who have since gone on to cite Northlane’s sound, style and professionalism to be huge inspirations.

Having mastered their new style, Alien saw the group unveil their most experimental album to date. From Pettersen’s enigmatic drumming in Rift and Details Matter to the organically produced electronic vibe of Eclipse and Jinn; Alien really felt like something new and different.

After Node and Mesmer relied on similar tunings, riffs and themes, Alien ingenuity marked it as unparalleled in the group’s catalog. Through an amalgamation of genres and an acoustically based EP showing different interpretations  of the release, Northlane displayed their ingenuity and propensity for diversity.

Crowd growth was exponential, with the Sydney-siders selling out their biggest shows to date, headlining large scale festival events like Full Tilt as well as scoring the group their third ARIA win.

If Northlane’s back-catalog shows us anything, it’s that they are a group that is impossible to gauge what they will do next. Although, considering their work shows constant stylistic changes that have proved to be an influence on other groups; and 2D debuts elements of Middle-Eastern maqamat and the incorporation of choirs, we are pretty damn excited to see what they tackle next and the impact it will have.