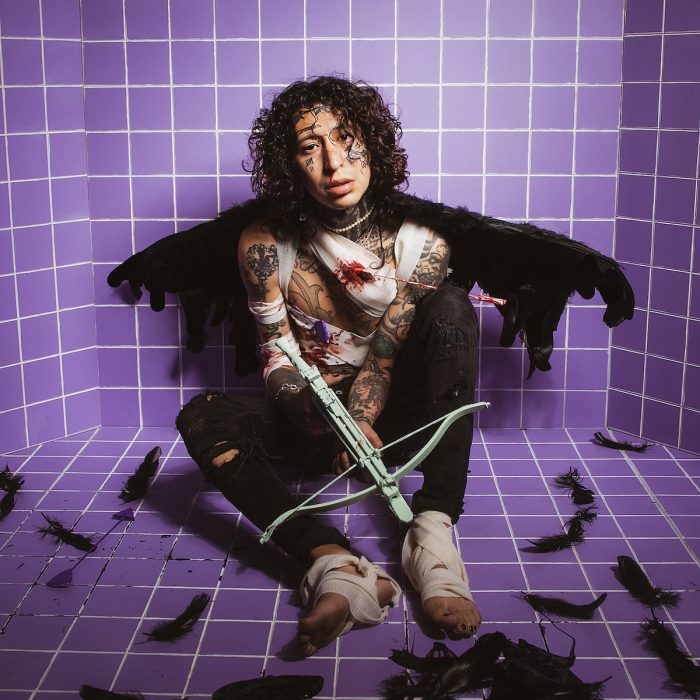 You don’t need us to tell you that pop-punk’s having a real resurgence at the moment.

Fronting a whole new generation are the likes of KennyHoopla, JXDN, and now, emo-rap royalty LiL Lotus. With his Epitaph debut, ERRØR BØY, out in the world, we caught up with Lotus for a chat. Read on.

Hysteria: Where are we catching you from today?

LiL Lotus: I’m at one of my homies’ houses in Woodland Hills, LA. Just sitting on the porch, staring at the sky and having a drink- that’s the scenic explanation.

Congratulations on the release of ERRØR BØY. How does it feel to be dropping it through Epitaph Records?

In general, it feels like a breath of fresh air. I mean that in the sense that I’m finally releasing it. Having come from the Soundcloud world, I’m so used to making a song, getting a decent mix, taking a photo and just putting it out. I even released my last album in volumes, so it’s been different coming in and releasing a full body of work. It’s nice that it still feels cohesive. I make all kinds of different shit, and it’s still what I wanted it to be.

The crazy thing is growing up; all my favourite bands had the little Epitaph logo in the corner. Even before I understood labels or anything, that logo stuck out to me. It meant the band was a part of my world of music. Releasing things through them is such a milestone for me.

Can you pinpoint any moments or bands that set your musical journey in motion?

I’ve been singing since I was four. I come from a family of musicians. Both my parents, my uncles and my grandpa have done something with music. I remember growing up and having everyone sing to me. I was eight years old when I picked up the guitar, it was actually my great grandpas, and I didn’t know shit.

My dad, who was more of a singer, told me he knew four chords and that all the greatest songs revolved around them. He told me I could make whatever I wanted with them, so I learnt them. I used to play sports too, but when I learnt those chords, I was like fuck sports, I’m playing guitar instead. Since then, every day has been about music for me. Following that, I started looking up to certain bands or guitar players. I started looking at different styles and music videos and wondered what my stuff would look like.

You’ve spoken about putting a lot of life’s pain into your music. Why is that so important for you?

I’ve always been very emotional, vulnerable and honest. Over time, I feel I’ve become more of an open book. But I also don’t feel like I do any of this consciously. It’s just second nature that everything comes out the way that it does. I just say it all.

So Drew, Zach Jones and my homie, Josh Strock (writer), did Girl Next Door, Why U Do Me Like This and Fake Love. I’ve known Josh since I was 18, from back in Texas. I was in a metalcore band back then, so we had history.  I remember Drew had hit me up about that band, saying we should make music together. Fast forward a few years, I met Zach through Josh, and we all started working on stuff. It had very ‘homies’ vibes.  We all hung out, had mutuals in the band world and just wanted to make music, so we did those three songs.

Working with Feldmann was on a different level though. I went in there and didn’t really know what we’d be working on. It doesn’t matter when it’s with your homies, but the pressure was on in there. We found our footing and just started hacking away at the album. It was more intense than I’m used to, but it came out exactly how I wanted.

Pop-punks going through such a resurgence, but what’s stuck about it now is how fluid it’s getting. So with that in mind, what would you say are the defining aspects of your sound?

For me, no genre’s ever really felt irrelevant. I’ve always touched on the genres I have a soft spot for in my heart in some way, whether it be through a full song or just having something in the verses or the hooks. Now, on this album, I’ve zoned in on specific sounds. There are moments where you’ll hear old Lotus, new Lotus and maybe even future Lotus.

You collaborated with a few different artists on the record. Tell us about that experience.

Like I was saying earlier, Girl Next Door was originally me, Zach, Drew and Josh. I told Lil Aaron I wanted him to jump on the album, and he wanted to hear what we had so far.  We ended up doing Girl Next Door, just like we do our Boyfriendz stuff. Listening to it after, we were like, damn, we snapped! I think that was the first song we’ve ever done, just the two of us. We’ve done Boyfriendz stuff together, but I think everyone was waiting for an Aaron/Lotus song, so I’m glad this was our first one.

Then Travis came with the Feldmann parts of the album. I showed up, not realising he’d even be part of the project.  Feldmann told me Travis was here and would be tracking drums, and because he said it on a first-name basis, I just started thinking about all the familiar Travis’ in my life. Then he was like, no, it’s Travis Barker, and I thought I don’t have anything written and I don’t know what I’m going for, so this is going to be great. Luckily, it was (laughs). When he walked into the room, I was tracking vocals. I heard somebody, and I got spooked, and then I saw him and got spooked again. The first thing I said to him was, what’s up, legend (laughs). We just spoke about a bunch of different bands and people that we knew, and it was sick,

And then, with Chrissy, we had Romantic Disaster, and Brett (Gurewitz, Epitaph Records) wondered if we should put a female vocal on it. We thought Chrissy would sound good on it, so we called her manager and recorded it, and it flowed perfectly. She killed it.