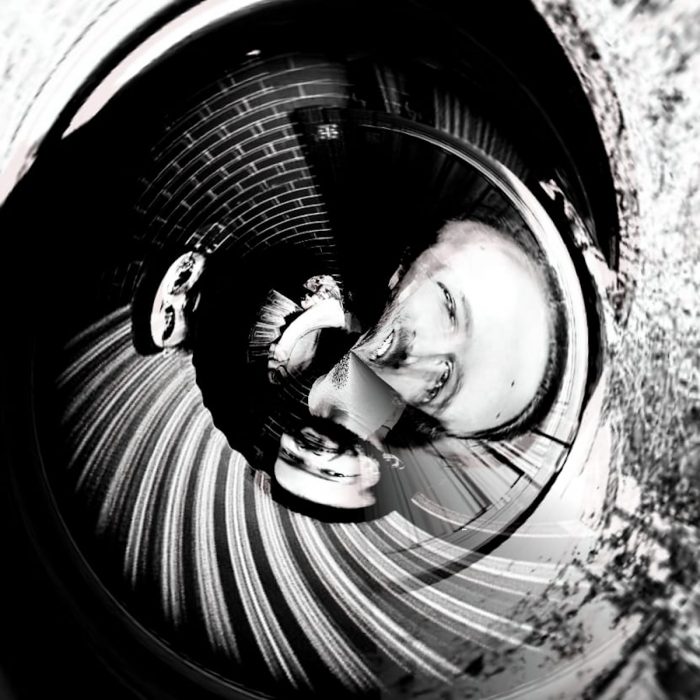 The origins of industrialists Larry Leadfoot lay in the Blue Mountains, 60 kilometres west of Sydney, in the mid-00s.

Now based in Melbourne, the eclectic and chaotic trio have at last collected several of their digitally-released tracks onto one volume, the five track EP Hellxotica. Drummer and founding member Nick Parkinson came forward to shine some light on his hectic experimental metal band.

How did Larry Leadfoot get started?

Basically it started when I joined a metal band back in about 2006. A very old friend of mine used to come to my shows. He sort of dabbled in guitar but had never played in a band or played on stage, and he used to come and watch my band a lot. Then one day the guitarist in the metal band I was in decided to leave, and I said to my mate, who you know, I’ve known him since high school. I was like ‘Man, why don’t you jump in and see how you go on guitar?’ So he joined and we were gigging around Sydney with them. You know we went and recorded up in Byron Bay, did shows in the Southern Highlands in New South Wales, hitting the metal scene together in that band and then eventually we kind of outgrew that band and decided we wanted to kind of do our own thing. We ended up moving in together for a while and just started writing songs, started coming up with music. We didn’t have a vocalist or a bass player, it was just drums and guitar and we even used to perform as a duo occasionally. We just kept jamming and playing covers, Strapping Young Lad covers, Amon Amarth covers stuff like that and then, so after you know, writing a couple of ideas, living in the Blue Mountains, and I ended up moving down to Sydney.

I was in a band with this other guy who knew a couple of people in this warehouse down in Sydney so I moved there. Then my guitarist Aaron moved down, so we were now both living down in Sydney and we met this guy called Thomas and he became our vocalist.

I’m stoked. This is all I’ve wanted to do for ages and it’s taken me this long, you know, to find the right people to do it with.
[ Nick Parkinson ]

The line-up you have now in Melbourne is all different from the original band, now, isn’t it?

Yes, it’s a whole new line-up that I have for the band now.

The EP was meant to come out in late October but it got held off. What was the reason for that?

There was a delay with the artwork. We got contacted by an artist in Europe who’s going to get a lyric video done and we sent him some artwork which we thought he would be able to work with, but, yeah, he ended up getting back to us saying that he couldn’t work with the artwork so he was going to do it himself. So he’s come up with all the original artwork and we didn’t think it was going to take this long! It’s not a COVID thing. It’s not a bad thing. It’s just some peripheral outside thing that’s silly, holding everything up there. We were like, ‘Oh, we should probably tell the guys at Overdrive,’ and they were like, ‘Yeah, we should push it back.’ I don’t think it’s gonna lose anything by doing that.

How long then is it taken to get to this stage, from writing the songs to making the EP available?

Well, I did release it digitally a couple years ago, but without any backing. So it’s been, you know, pretty much a decade. Since we started writing songs with the vocals, yeah, 2011was our first show.

That’s a long time, then, that it’s been on the boiler so you must be pretty pleased to be able to finally get it to a wider release.

Oh man, I’m stoked. This is all I’ve wanted to do for ages and it’s taken me this long, you know, to find the right people to do it with.

This is just five songs. Do you have other songs that you are also waiting to release?

We also have a live EP that we’ve recorded. That might get released digitally too, but we’re waiting until after this one and that’s got one new song on it. All the other songs are from the first EP, but I’ve been writing shitloads with this other guitarist. Before COVID we were coming up with, like, tons and tons of material. Since COVID, that’s kind of, you know, slowed down.

Last year when the COVID first hit we were writing, you know, at home and sending ideas constantly. But then the bass player and vocalist decided to leave, so it’s stopped. The guitarist that I’ve got here and the bass player, we were writing a bit before this last lockdown and then this last lockdown brought us to a halt. My guitarist had a few medical issues. But he’s all good now. We’ve got tons of stuff recorded. We’re keen to write more.

Can you give us a blow-by-blow about each of the songs on Hellxotica now?

That was the first song we ever wrote. I just came up with the drum introduction and the main beat just by myself just one day and I don’t think I recorded it or anything. That was where we began. We just went from there. You how songs mutate until it’s gotten to where it’s done, you know. That first one we ended up coming up with the entire structure while we were actually jamming with another band, Red Bee. We were jamming at their house and that was where I personally came up with the final structure. While we were jamming the song with those guys. Ian, the drummer from Red Bee was playing guitar and Jim and Dan from Red Bee were there, I think Dan actually wrote some lyrics for it, which we ended up scrapping.

That was Aaron. He did that alone actually.

I think that one was probably just us jamming stupid drunk. I’m playing this real slow, kinda dirgey kind of black metal. I mean, people would suggest that jamming when you’re super drunk isn’t the greatest idea that you may have ever had, but it can work out pretty well sometimes. I think we were pretty much blind drunk most of the whole time we were recording it.

I remember I came up with the intro beat while I was on the toilet. I ran upstairs… This is when we were living together and I ran upstairs and I was like I’m gonna write this down. We had a white board up on the wall and, I don’t know, I was just on the toilet. I just came up with this idea and then I wrote it down on the white board and then it went from there and then somehow that was when I first decided to put a Latin beat into one of our songs. That was kind of where I kind of had this epiphany of like I can mix Latin beats with death metal. It’s definitely something that I recommend, something that needs to be explored. Latin beats man, they really get inside your head so it’s also very catchy when you put something like that into so that that works pretty well.

OK, that song I don’t really remember. We’re probably stoned or something. I came up with that title after having a dream. I remember that yeah, that title came to me in a dream. I think it had something to do with Thomas’ lyrics. They just had this real kind of moodiness and, I don’t know, just ambience about it. Everyone thought it was a good name so it stuck.