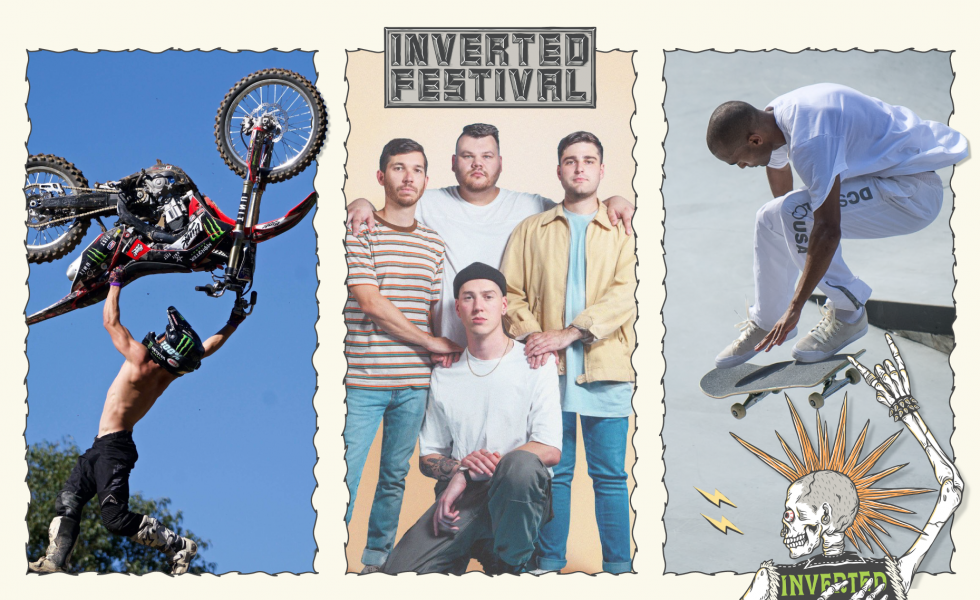 Dec 14, 2020 / WORDS Alex Callan / Inverted Festival is showcasing some of the best Australian talent in both the worlds of music and extreme sports.

“I’m going to give you the scoop here … I don’t know how to play saxophone.” When Trophy Eyes dropped their newest single Figure Eight, the internet went haywire.

The pleasant yet surprising addition of a saxophone solo got fans formulating conspiracy theories left right and centre as to who could be the member donning the sax.

That’s when their bassist, Jeremy ‘Jezza’ Winchester made a tweet.

“So what happened was, we got a friend of a friend to record it for the song, an American guy called Jacob.”

“Then after the song came out I just tweeted ‘I bet you didn’t know that I could play saxophone’ and that kind of blew up a little bit and we had news outlets writing articles about it and then eventually someone changed Wikipedia and I realised it had got out of hand.”

Winchester laughs, “It was a joke that kind of blew up a little bit there. I feel like I need to learn to play it now.”

Although surprising, the inclusion of different instrumentation was embraced by Trophy Eyes’ legions of fans, who at this point should be expecting a new sound with each release.

With recording put on a standstill due to Covid, the lads have plans to get back into the studio early next year. As to whether Figure Eight will make its way onto an upcoming release is yet to be decided.

It sounds almost like a Warped Tour kind of thing, it sounds really cool so I’m super excited to play that one. We might have new songs out by then, I guess we will have to wait and see.
[ Jeremy ‘Jezza’ Winchester ]

“We aren’t sure if Figure Eight will be on that release or not, we are just going to play it as it comes.”

“The next release won’t be a full album, it’ll be more a compilation of singles. Not quite an EP but just some songs that we thought might be single worthy. Then hopefully an album after that for next year.”

After hitting the road and doing a handful of shows after 9 months off, Trophy Eyes will also be doing a special appearance at 2021’s inaugural Inverted Festival.

“We got hit up to play a new festival and we were intrigued.”

“We didn’t know much about it but apparently it’s a bunch of Aussie bands with sport athletes like Skaters, Motorbike Riders and BMX riders.”

“It sounds almost like a Warped Tour kind of thing, it sounds really cool so I’m super excited to play that one. We might have new songs out by then, I guess we will have to wait and see.”

When asked if he would be hitting up the skatepark section of the event Jezza laughed and responded “I was always into BMX and Pocket was into Skateboarding. I’m not too sure about Blake and John but me and Pocket lived around the corner from each other and he loved skating as a young kid who also loved Blink 182.”

“I haven’t rode a push bike in at least ten years so I’m pretty out of the game there.”

Well, that’s what he says now. But when there’s an entire festival peer pressuring Jezza into hitting a ramp on a BMX … who’s to say what could happen.