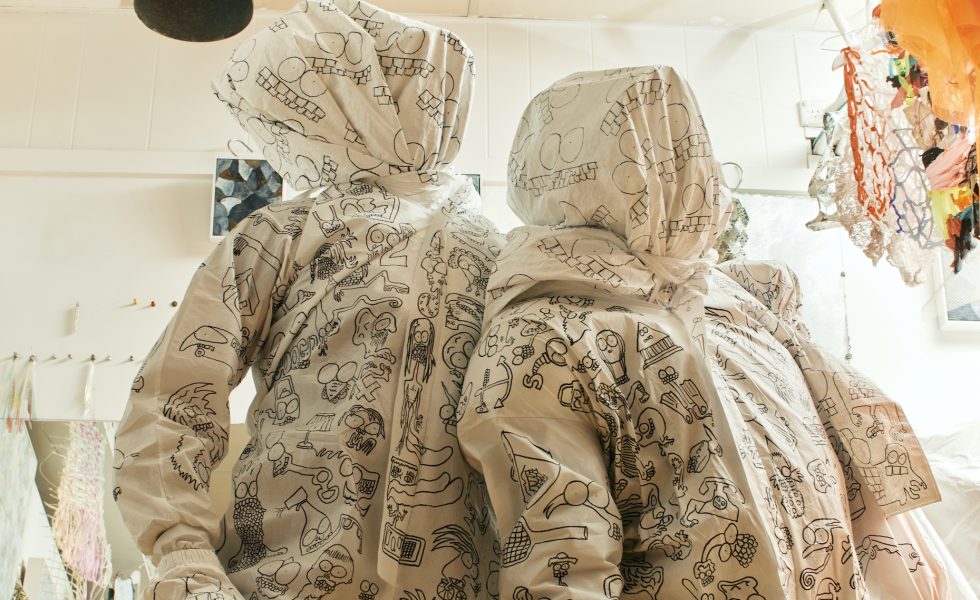 TISM last night overheard the ex-prime minister deliver his real concession speech in the building recently named after him; they were hiding by the windows, whilst he stood in the Morrison Hotel, by the doors.

Mr Morrison: Let me first clarify one thing. Some people are claiming I intended to win the recent federal election, and so remain this country’s leader. I reject this entirely. No fair-minded person, once having closely studied our policies for the future or our performances in the past, could have thought we were serious about running this country. After all, one of our candidates was Alan Tudge. Moreover, I have put this charge before the infallible judge upon whose deep wisdom and moral probity I have always relied–and Phil Gaetjens has concluded he agrees with me. Some may quibble Phil was investigating the very person he works for, but that wouldn’t bother him, as he’s used to it.

These scurrilous accusations are as false as the criticism that I am an untrustworthy bully. Untrustworthy? Look at what I did when Josh fecklessly blew $19 billion on JobKeeper. Imagine what I’d’ve said if he’d been a Labor treasurer! Imagine! Nine-teen-bill-i-on! Yet I have never once spoken to him about it. Not once. This shows what a supportive leader I was.

And a bully? Well, first off, these accusations seem mainly to be made by women, which shows half of the population never had a problem with me. Second, women aren’t powerless because men like me despise them; men like me despise them because they’re powerless. I would never bully anyone who has power over me, and I’m no sexist: that includes a powerful woman. If I ever met one, I’d prove it.

After all, I have a wife and daughters, as seeing Jenny often reminds me. And where are women more respected than within the family? If I didn’t believe this, would I have had a deputy prime-minister like Barnaby Joyce? As Barnaby told us often during the same-sex marriage debate, he supports the family. In fact, he supports the family so much, he’s got two of them. He was too modest to mention this at the time, which I think says a lot about the man.

It may be that, to some cynical journos, I might have looked and sounded like I wanted to win this election. Well, they can follow what they’re told by their senses – but I grew up being taught there are other, better things to believe in. If there’s one thing my faith has shown me, it’s that if nothing is true, everything is possible. I have always strongly supported Australians’ right to freely choose the beliefs they want to force on other people. My own strict Christian faith allows me, for instance, to ignore not only the many explicit, written, unambiguous biblical injunctions that prohibit charging interest on loans, but also to disregard the fifteen centuries of Christian practice during which those rules were enforced; whilst at the same time, I bind myself whole-heartedly to always following that same Bible and those same centuries of tradition regarding, say, the roles of men and women. This instinct I have to instantly choose to believe whatever I want, whenever I want to – a habit of mind taught to me by my faith – was the basis of my political career. To me, it doesn’t matter so much what we do with power – more important to me is that it is us doing it. As all Australians know, we Liberals don’t mind institutions having great wealth and influence. But they’ve got to be the right institutions. Why, banks robbed, cheated, provided criminals with millions in laundered cash, sold products to dead people – we backed them to the hilt. But the superannuation industry not only provides working people with protection from the vicissitudes and poverty of old age, but it also invests in green energy, was set up by Paul Keating, and is often controlled by the unions. No wonder we hate them. All Australians can see the difference. I want to make this clear: Jesus is universal and super, but that doesn’t mean he supports universal super.

Finally, let me ask all Australians: did I lose the election? Did I? After all, I’ll be back – if not me, my ideas will be. And you don’t need a majority to win over Australia to my way of doing things. You just need (to use the phrase of Joe Hockey, a person who grew up trained in the demanding moral ethics of real estate agents) is a committed minority who are lifters, not leaners; who lift themselves, no matter what, disregarding others, rather than lean on their fellow man in the repugnant belief that we have mutual obligations to a common good. In this way, my rule lives on. People sensed in me a hard nut of selfishness, a bullshitter’s ability to win through, a faculty for ignoring any legitimate grievance if it conflicts with my self-interest. Everyone has had a boss like me – the bloke you bitch about only after he’s left the staff area. (You wait because he’s the boss: what a great exemplar of power!) It was important that not only was I a bullshitter, but that I was an incompetent bullshitter. If Australia is a country where only the talented, the original, the creative or the competent get success, where does that leave people like me, who only have rat-cunning? My example has shown the nation it needn’t be so. As Josh points out, we threw all that JobKeeper money at rich business people because they might not have applied for it if they had to pay it back. Of course, they would only have had to pay back the stuff they didn’t deserve to get. And that’s not the LNP way. If the Australian business class only gets what it deserves, what’s the point of government at all? And where would it stop? Why, people deserve good health care, fine schools, a maggot-free lunch in aged care, but you didn’t see us doing that. Besides, robo-debt showed how we got poor people to pay back even the stuff they did deserve. In the end, it all balances out. Only an idiot can’t see the system works. I may be out of office, but I’m not out of power. You don’t need everyone to be like me; you only need enough of us to not do our bit, drop the hose, decline refuge to the powerless, ignore the sick, disrespect the peacemaker, and I truly believe then the spirit of self-interest will do its holy work, and so force the rest to abandon the common good and act the same. I’m changing Australia in small increments, and soon it’ll be like climate change: too late to change back.

This is why it is impossible for me to have wanted to remain this country’s leader. I was never a leader.

TISM [attempting a gotcha question]: Can you name the seven dwarves?

Mr Morrison: Of course! I loved them all as a kid, and tell Jenny she should read their story to ours. There’s Self-Importance, Duplicity, Flim, Flam, Smoke, Mirrors, and, lastly, loveable Colbeck.

TISM: Is it true that you will play live with us during the Good Things festival at Melbourne, Sydney and Brisbane on December 2nd, 3rd and 4th?

Mr Morrison: I reject the premise of your question. However, I can certainly see why TISM have decided to play live again. Now myself and my cabinet are out of office, there is an opening for public appearances by grotesque clowns.

TISM: Can you at least confirm Tim Smith, ex-member for Kew, will be driving the TISM tour bus?

Bring Me The Horizon | Deftones | NOFX (performing ‘Punk In Drublic’ in full + all your favourites) | TISM (Exclusive: First shows in 19 years!) | The Amity Affliction | Gojira | ONE OK ROCK

Sign up now for early bird pre-sale tickets at www.goodthingsfestival.com.au 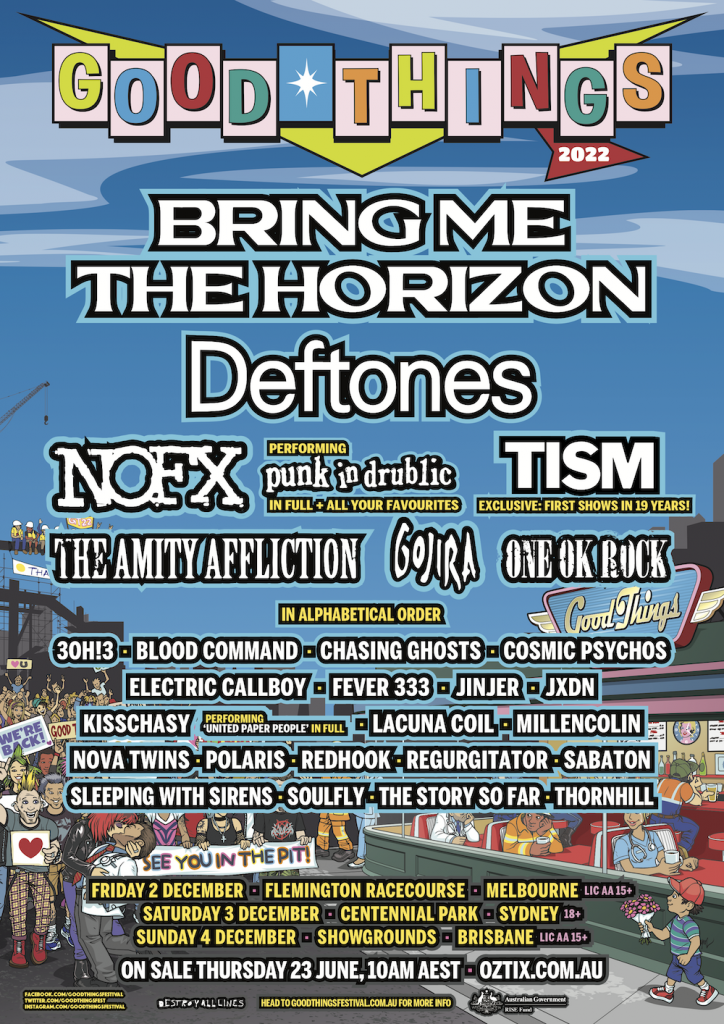