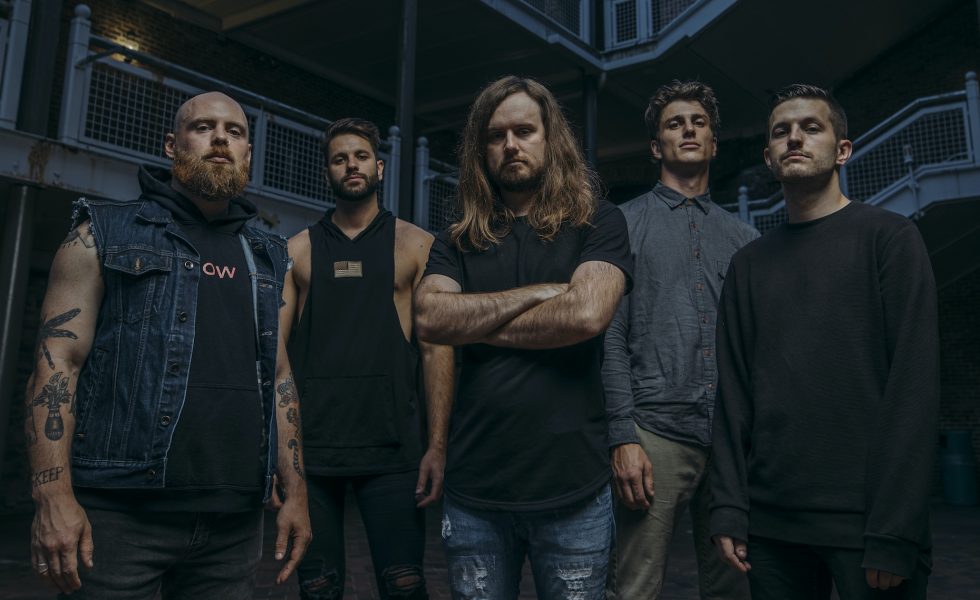 FIT FOR A KING // Walking A Different Path

In what has become a fairly dark time for heavy music fans around the world, Fit For A King are shining a light: offering a brand new, more positive metalcore record for these difficult times.

MORE: KICK OUT THE JAMS with IN HEARTS WAKE // PRIVATE FUNCTION: It’s Always Their Line REVIEWS: MARILYN MANSON: We Are Chaos // NOFX/FRANK TURNER: West Coast Vs. Wessex // IN HEARTS WAKE: Kaliyuga // SEETHER: Si Vis Pacem, Para Bellum // PRIVATE FUNCTION: Whose Line Is It Anyway? // AGNES MANNERS: Fantasia Famish // MOVEMENTS: No Good Left To Give // FIT FOR A KING: The Path

While their last two albums Dark Skies and Deathgrip carried some dark and personal messages in their lyrics, vocalist Ryan Kirby says their upcoming record The Path aims to present a much more positive message to listeners.

“The Path is a lot more of a positive record from Dark Skies and Deathgrip,” he says. “The last two records have been overwhelmingly sad songs and I just wasn’t feeling that way anymore. Metalcore is just littered with kind of, the songs are either like, ‘I don’t care what you think’, or it’s a really sad song, and I was like: let’s write something that’s almost like an Anthem to you moving on in life, and you conquering everything that’s been holding you back.”

“And that was my goal going into The Path. Obviously, there’s going to be a couple songs that are different, because sometimes something is on your mind and you got to talk about it. Overall, The Path is just about finding your path out of whatever’s holding you back.”

While lyrically the new album promises to be more uplifting than Fit For A King’s past records, there are a lot of similarities that Kirby and the band carried into The Path from last record Dark Skies. While Dark Skies was a bit of a departure from Deathgrip and the albums before it, with catchier choruses and more melodic hooks, The Path took what worked from Dark Skies and refined it–something that definitely came across in the writing process.

“[The Path] honestly had a very similar writing process, except this one, while Dark Skies was probably 80% written in the studio, The Path was 100% written in the studio. Our band doesn’t see each other much outside of touring and something about when we get in that studio setting, the creative juices that were locked up for the two years of touring, just overflow,” says Kirby.

“Like Breaking The Mirror, we wrote in one day: vocals, music, everything, it was completely done. And it was actually the first day we were in the studio. That’s when we were all like, ‘Okay, well, this is how we’re going to do it’. Cause we had stuff written, but everything we were writing in the studio was just crushing all the pre-production we had.”

As far as how The Path differs from Dark Skies, Kirby says the band aimed for this new record to be bigger and bolder than what they’ve released to date–sacrificing their small town metalcore sound for something grander.

“It’s more of an, arena-y–I don’t want to say arena–but it just sounds like [it suits] a bigger venue,” says Kirby. “You would play it in a big venue is what I’m trying to say. Our goal is, ‘let’s not write stuff that sounds like it belongs in a small venue.’ We want to write big music. We want to be the next Parkway Drive, to use an Australian band. And if we’re going to be the next Parkway Drive, we need to write songs that sound like they need pyro.”

There’s only one problem with writing songs fit for an arena in 2020–there aren’t any arena tours to speak of. While the unforeseen circumstances of the world as we now know it haven’t affected the release of The Path, the band are disappointed that they won’t be playing these songs for fans just yet.

It’s funny, cause the most annoying thing about being a Christian band is the other Christians. There’s another thing that kind of pushes me away from wanting to relate to that world. Cause man, I’ve seen some insane comments. With our new album artwork, it’s the Greek Goddess of victory, and somebody’s like, ‘wow, you would put a pagan on the front of your album art’. But I’m just like, ‘I don’t have time to listen to you’. At first, I’d entertain it and take it to heart but, six albums later, I’m just like, ‘Okay, you can think that.’
[Ryan Kirby]

“I would definitely be lying if I said I wasn’t very bummed listening to our record knowing I don’t know we’re going to get to play these songs within the next year or two,” he says. “All I can think is I hope we get to, but there’s no guarantees that touring will come back even in 2021. It seems like music, especially the kind of live music we play, where it’s not assigned seating and there’s no way to social distance, it’ll probably be the last thing to come back. And that’s why you just have to, it’s like, go wear your masks. We want to start touring again.”

While waiting until 2021 or 2022 for touring to become a reality again is a scary prospect for heavy music fans and bands alike, it’s not completely out of the realm of possibility, given the realities of the live music experience when it comes to metalcore and other heavy genres.

“I think metal specifically, you can’t tell the crowd to stop moshing, even during a pandemic. I think if the crowd is packed in there, they’re going to go mosh with their masks on and then go hand sanitise right after the set. But I don’t think touring will be normal again until there is a vaccine, unfortunately. So, we just keep an eye as close as we can to vaccine news,” says Kirby.

So, if moshing with masks on and hand sanitiser are on the tables, what about full-hazmat-suit moshing?

“That would honestly be really cool. So not opposed to it. I feel bad for how hot and sweaty it’ll get, but it’ll look good in photos,” says Kirby.

Speaking to the band’s association with Christianity, particularly in terms of Kirby’s own faith and how it impacts his lyrics, it sounds like The Path is far from the gospel that heavy music fans might expect from a band saddled with a ‘Christian metal’ label.

“I’m not scared to say I’m a Christian, but I would be lying if I was like ‘Fit For A King are a ministry, and we’re here to spread the word of God’. Because that would be me being dishonest.”

Strong beliefs have always been at the forefront heavy music, but for Christian bands in a genre that is so commonly thought of as ‘the devil’s music’, there’s certainly some bias from the community.

“There’s definitely a bias against Christians to an extent. We’ve heard there’s certain bands that didn’t want to take us on tour because they thought we would preach, or something like that. We’ve never preached on stage or anything, and I think fans are realising that.

“It’s funny, cause the most annoying thing about being a Christian band is the other Christians. There’s another thing that kind of pushes me away from wanting to relate to that world. Cause man, I’ve seen some insane comments. With our new album artwork, it’s the Greek Goddess of victory, and somebody’s like, ‘wow, you would put a pagan on the front of your album art’. But I’m just like, ‘I don’t have time to listen to you’. At first, I’d entertain it and take it to heart but, six albums later, I’m just like, ‘Okay, you can think that.’”

While the mainstream Christian community may be hard to relate to for a Christian member of a metalcore band, the strong sense of support and community that has come form the heavy music scene in general in these bizarre times has been overwhelming for Kirby and the band.

“I think it’s been incredible, the amount we’re selling online,” he says. “I know some of my friend’s bands are selling a lot. Like people are really rallying, which helps support bands during this period of not being able to tour. And I have a feeling when touring is back and allowed, that the shows are just going to be even bigger than they’ve ever been, because there’s a real hunger for live shows again. And So much of metal is the live show.”

Though touring globally might still be off the cards for quite some time, Kirby promises that Aussie Fit For A King fans will see the band make their long awaited return to our shores as soon as their able to tour again.

“I just want to say thank you to all our Australian fans for sticking with us. Even when we haven’t been back in six years. We will 100%, whether we have to headline or not, come back to Australia, as soon as touring is allowed to open. Or we’ll at least book the tour and make it happen because no more excuses, we need to make it back to Australia.” says Kirby.

Fit For A King’s new album The Path comes out 18th September through Solid State Records.