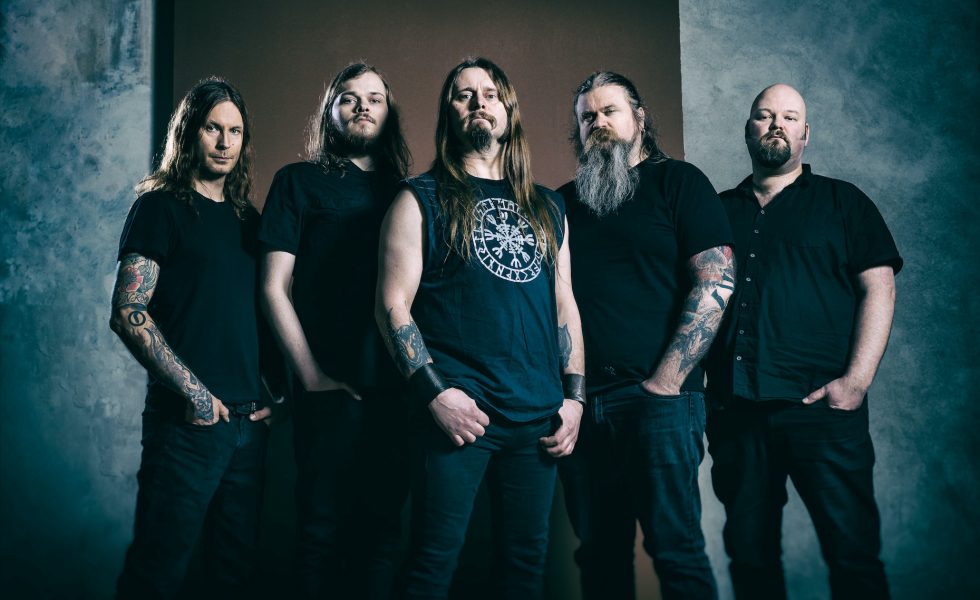 Civilisation, Order, and Progress: the world of the seen, of the conscious, of control. It sits like a crown upon head of humanity but what tempests of instinct, disorder, and innovation churn and thunder beneath? With their fifteenth studio album, Norwegian extreme metal force Enslaved invite us to enter the primeval realm of Utgard.

MORE: KICK OUT THE JAMS with IN HEARTS WAKE // PRIVATE FUNCTION: It’s Always Their Line REVIEWS: ALPHA WOLF: a quiet place to die // MARILYN MANSON: We Are Chaos // NOFX/FRANK TURNER: West Coast Vs. Wessex // IN HEARTS WAKE: Kaliyuga // KING PARROT: Holed Up In The Lair // MOVEMENTS: No Good Left To Give // ENSLAVED: Utgard

“It is a place in Norse mythology,” Enslaved’s guitarist Ivar Bjørnson says. “It’s described as the ‘stronghold of the giants’. The giants are the primeval beings of Norse mythology, from creational myths, but they also continue the unpredictable force. They are not enemies of the gods per se, but they are uncontrollable, they cannot be manipulated or controlled or used as they gods please. It’s also used as a metaphor, in psychology, for the unconscious, and the development of the human psyche. It describes the ‘shadowland’ where our creativity, humour, but also chaos and unruliness started, sometimes hard to understand, but it’s a connection that we are dependent on having. In that metaphorical way we can represent our own unconscious, and going in there and daring to see what we are really like in our own shadowland.”

On what brought Enslaved to this theme for the album, Bjørnson says, “We’ve been looking so much at various aspects of the world of the gods in mythology, which correlates more or less directly to the conscious mind. But we’ve always had a fascination for the unconscious, and finding the elements in mythology that come from that, in particular the giants. So, I think it was just the right moment to turn that focus.”

Indeed, this is a critical time to contemplate the uncontrollable forces of chaos and darkness that pervade and undermine civilisation. Given this is a metaphor for the inherent tensions between culture and primal nature of the human mind, Utgard seems to have a very different mood to 2017’s E; it feels darker, heavier – musically and conceptually, and more chaotic. Bjørnson agrees, as he elaborates on how the strange soundscapes of Utgard came to be. “The lyrics and the concept were pretty much written at the same time,” he says, “a lot of the song titles and the concepts were made before the music, which is something we haven’t done before, and I think that influenced the song writing in the direction that it’s more direct, so the essence of the song came faster and that’s maybe something that influenced the songs to become a little bit shorter. Also there’s a mood about it, about the journey through the shadowland, that it has a constant absence of light in the concept, it’s all happening in the dark, in the shadow world.”

We’ve been looking so much at various aspects of the world of the gods in mythology, which correlates more or less directly to the conscious mind. But we’ve always had a fascination for the unconscious, and finding the elements in mythology that come from that, in particular the giants.
[ Ivar Bjørnson ]

“Coincidentally,’ Bjørnson says, “that is pretty much how the album was recorded. From first October, and finished late December, and that means, in our part of the world, in Norway, and recorded and mixed in Sweden, it’s dark all the time. The few hours of daylight were in the middle of the day when we were in the studio anyway. So we didn’t see much light, and I think that also affected the mood, not particularly scary or horror-like, I think that’s a misconception of darkness. In our ‘Christian world’ it’s ‘bad’, but it has a lot of hope, a sort of a longing, a lot of reconnection qualities, which I think sits very well with this sort of ‘night time’ atmosphere of the album.”

There is certainly a lot of musical variation on Utgard. Some tracks, such as Sequence and Urjotun, shift between several movements and styles that at first appear to be at odds. As Bjornson explains, however, this is all part of the layered meanings within Utgard. “It reflects a lot of the tension between the orderly and chaotic, in a different way, as in they compliment each other, and even more that, it’s about psychology, such as when Carl Jung talks about the conscious and the unconscious, it’s about the connection, they need each other to exist, and that is what is reflected in the music.”

Speaking of deeper meanings, Jungian psychology aside, Fires In the Dark opens the album with a profound chant, that sounds like it might be another beautiful example of Enslaved reciting Old Norse. “Yes, that is Old Norse language,” Bjørnson says. “it’s from Hávamál, the title of which in Old Norse means ‘speech of the high’, some people refer to it as ‘Odin’s law’, in Latin it’s the Axioma Ethica Odini which, which is ‘Odin’s axioms’ which is a bit of a mistranslation, it’s more his ‘speech’, his guidance, his advice to man. It’s verses 142-144, for those who want to look it up, it’s pretty much a section of the creational [sic] tale from Norse mythology, about the first giant Ymir, which is brought out of this primeval connection of fire and ice; the first being, the first of the giants.

“It felt appropriate to begin this journey by reciting the poem of how it all started.”