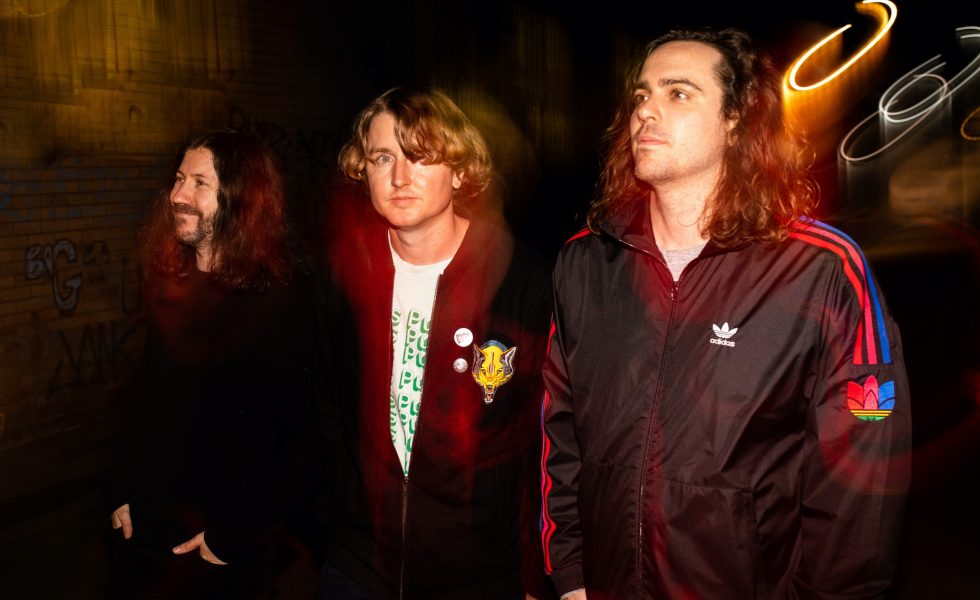 DZ DEATHRAYS // Learning To Go With The Flow

In February this year, dance punk heroes DZ Deathrays made their long-awaited return to the stage in Brisbane for the first date of their All Or Nothing tour. It resumed up long-delayed business after the touring cycle of 2019’s Positive Rising: Part 1.

“We didn’t see each other for about a year – it was so nice to be playing on stage again,” says frontman Shane Parsons of those first shows back.

“We announced those shows at the last minute and thought ‘if any get moved, we’ll just go with the flow….we ended up having to move about four shows, but it felt like things were finally kicking back into gear.”

The shitstorm of 2020 was jarring for all artists around the world, but for DZ it came at a particularly awkward time, with the band in the middle of promoting what was meant to be a double album cycle for their Positive Rising rock odyssey.

“These records were meant to be one sonic adventure—but now there’s been a two year gap between them, which is just crazy,” says Parsons, who tells us that both albums were written together in 2019.

“When we finished Bloody Lovely (2018) we started writing again straight away—things moved really quickly, and we always wanted to do a double record, but we thought in this day and age doing two records at once would give it away too quickly.

“Last year we had planned these small intimate launch parties with both albums being played front-to-back, just with the hardcore DZ fans—obviously now that’s changed now, but we still want to play some deeper cuts off part 2 on the next tour.”

Releasing a double album in 2021 goes well against the grain for the modern music industry, dominated (for better or for worse) by the streaming model.

It’s something that Parsons says the band were well aware of, but pressed forward out of a desire to remain true to their creative selves.

“I read somewhere that 28 days is roughly the streaming cycle of a song. If you can release a tune every 28 days you have a good chance of being on the monthly playlist algorithm, so that can really build your presence on streaming platforms—that’s changed the way artists release music in a massive sense,” says Parsons, noting that the fast-food nature of the industry has also rubbed off on live events.

These songs are all [written] pre-pandemic…but I try to keep my optimism as high as possible! I said to my bandmates ‘when this record comes out, people aren’t going to want to hear about old me being locked in a house!
[ Shane Parsons ]

“It actually feels easier to miss when your favourite band is coming to town because of the algorithm online—we’ve had people ask us in the UK ‘when are you coming to town’—and we were there four days ago.

“When I was at uni, I remember picking up the street press, I’d read the gig guide cover-to-cover…in a way that was more effective and I saw so much live music; the articles, the gig reviews…now it feels like it’s really hard to get the point across that you’re doing shows.”

As Parsons notes, the tinge of darkness in the sound reflected the observations of the band looking at the world around them at the time of writing.

“The title track Positive Rising…there was the talk of the big wall between America and Mexico, and the whole idea of being an alien if you weren’t from America…some people come to countries because they’ve almost crash landed there, and then they have to go into hiding because it’s not really safe for them.

“It made me think about what would actually happen if aliens came to earth….loosely tied into how we look at immigration in certain countries…it was a nice way to have a creative direction.”

Despite the obvious events that have rattled the world since then, Parsons is adamant that he’s remaining optimistic about what the 20’s might hold.

“These songs are all [written] pre-pandemic…but I try to keep my optimism as high as possible! I said to my bandmates ‘when this record comes out, people aren’t going to want to hear about old me being locked in a house!”

Despite setbacks on a world-wide scale, Positive Rising: Part 2 represents a major creative achievement for the band who continue to release quality music with impressive consistency.

And while a new album cycle is only just beginning for the band, it hasn’t stopped their relentless productivity over the past year.

“We’re working on new music still—using the time to get into the studio, get other ideas finished,” Parsons says.

“We’re actually getting to the tail end of another record. The next batch of stuff we have coming up is closer to Bloody Lovely…but this new stuff has some of the heaviest stuff we’ve ever done there, mixed in with weird 80’s pop…there’s no boundaries with DZ.”

Positive Rising: Part 2 is out now via I Oh You