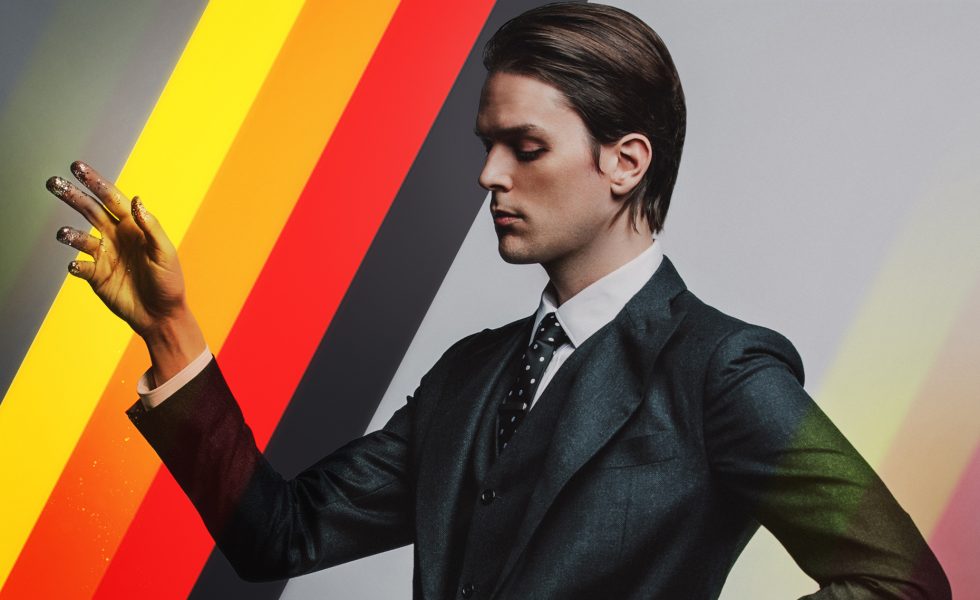 The sixties, seventies and eighties have been alive and well within pop culture for years now, but I Don’t Know How But They Found Me (or iDKHOW for short) have taken it up a notch.

The Salt Lake City two piece, consisting of frontman and multi-instrumentalist Dallon Weekes (ex-Panic! At The Disco) and drummer/percussionist Ryan Seaman (ex-Falling In Reverse), have already cemented their own unique style of nostalgic pop rock on their 2018 EP 1981 Extended Play.

With the upcoming release of their debut full-length Razzmatazz, according to Weekes, the record’s modern take on a beloved era of music’s history is something the band have been working away at for some time now.

“When we came out of the gate with the 1981 EP, the story was that this was just a forgotten act from 30, 40 years ago that never really got its chance. But if you look closely, that story and those timelines don’t really add up and they don’t really make a lot of sense. So, Razzmatazz is here to sort of iron that out and illustrate for you what you’ve been seeing this whole time may not be what you thought it was,” says Weekes.

A nostalgic approach is something that we’ve seen before in bands within the pop and alternative music scenes, but few commit to it as much as iDKHOW. Between Weekes initially denying the band’s existence and the presentation of their first few videos as supposed relics from a band long forgotten, Weekes explains that iDKHOW’s retro style was inspired by his fascination towards the bands in this era who never got their ‘big break’.

“That whole aesthetic was sort of born out of me finding weird YouTube holes to fall into. As we were making our first recordings, I discovered this great public access show that was on in New York and New Jersey in, like, the early 1980s called Stairway to Stardom.

“It was this weird talent show that people would go on and present their talent to the world, and this was the thing that was going to break them and make them a star, and it’s this bizarre parade of just people that thought that they had that X factor, and they 100% didn’t.

“I just fell in love with it immediately and I couldn’t stop watching. I wanted to be on that show. So, that’s where the idea of being from a long time ago got its genesis from,” says Weekes.

While Weekes doesn’t believe that a thematic approach to their music is a necessity for bands like iDKHOW, there certainly is something rewarding for the group to be able to take this more stylized approach with Razzmatazz.

“You certainly can put out an album of, you know, 10, 12 songs and go, ‘Here you go’, and we very well may do that same thing one day, but since it’s been such a long time since I really had an opportunity to be creative, doing it that way just kind of felt like a wasted opportunity. I wanted to do something that was a little bit more special, I think. Or maybe not special, but just something that had another aspect to it, rather than ‘Here’s 12 songs’.

We started this thing with zero expectations, and that’s what we’re sticking with. I think if you do that, then you’re never going to be disappointed with the things that come your way. We’re grateful for everything that’s happened to us so far, because we expected absolutely none of it to ever happen.
[ Dallon Weekes ]

“So, I’ve been inspired a lot by artists who’ve done similar things before. David Bowie did Ziggy Stardust and The Beatles did Sgt. Pepper’s Lonely Hearts Club Band, and I remember being 15 and pouring over that artwork, and sort of losing myself in that little fictional world that they had created for this album. So, I wanted to do something similar, cause I just thought it would be fun,” says Weekes.

Those two examples point to some significant influences for the band and should give listeners a good idea of what to expect from Razzmatazz. However, it’s inevitable that many listeners will draw comparisons to the previous work of Weekes and his bandmate Seaman, especially with Weekes contributing largely to the writing process of Panic! At The Disco’s 2013 album Too Weird to Live, Too Rare to Die!

“I think any sort of similarities is purely coincidental, just because I wrote so much music for Panic!, music and lyrics. So, it’s hard to completely disassociate yourself from your own writing and try to not sound like yourself when you write. That’s not really something I’m interested in.

“Anytime I write something, it’s coming from myself. Even if it gets, when it was for Panic!, it would still get filtered through someone else’s lens. But, you know, now that lens is gone, so it’s more me than I’ve ever had an opportunity to present before, I guess,” says Weekes.

When iDHOW started out back in 2016, Weekes and Seaman denied the band’s existence, not going public with the project until the lead-up to the release of 1981; a decision that was more motivated by the pair’s passion for just making music than any sort of publicity stunt.

“When we started this, there were zero expectations for anything other than to just have fun. We didn’t set out to go take over the world or anything. We just want to make music and play shows and have music be fun again. So that’s why we did it for the first year or so in complete secrecy and just denying that we even existed at all. Cause it was just for us at first.

“And I think we also wanted to, sort of, find ourselves again. Because we’ve both been employed in other bands for so long that you sort of fall into a role that may not necessarily be for you, but it’s still a good job, so you keep it.

“I think everybody gets to that point where, you know, if something stops being fun, you need to change something. And so that’s where this all started. I guess just wanting music to be fun again,” says Weekes.

Zero expectations from the band might seem strange in hindsight, considering they’ve already amassed over 172 million Spotify streams worldwide, but this approach is working for them–and it’s a mindset they’re planning on keeping.

“We started this thing with zero expectations, and that’s what we’re sticking with. I think if you do that, then you’re never going to be disappointed with the things that come your way. We’re grateful for everything that’s happened to us so far, because we expected absolutely none of it to ever happen,” says Weekes.

iDKHOW have already proven they’ve got a winning sound with what they’ve released so far, and Razzmatazz is sure to prove a worthy addition to the band’s catalogue. Whether you’re a fan of their retro brand of alternative pop-rock or not, Weekes hopes that, at the very least, their music will be a gateway to something else that you will like.

“You know, I’ve thought about this before, and I think at the very heart of it is, if you take nothing else away from I Don’t Know How, I hope at the very, very least, at the bare minimum, what we can do for someone is just sort of open a door into the kind of music that we enjoy.

“So even if we’re not your favourite thing, maybe we’ll introduce you to something that you didn’t know about that does become your favourite thing, like Bowie or T-Rex or Sparks, or, you know, any of that music that I really love. If we are the window that introduces you to that stuff, then I’ll be happy. Mission accomplished,” says Weekes.

I Don’t Know How But They Found Me’s debut album Razzmatazz is out 23rd October via Fearless Records and Caroline Australia.